For Joe Biden, long path to a potentially crucial presidency 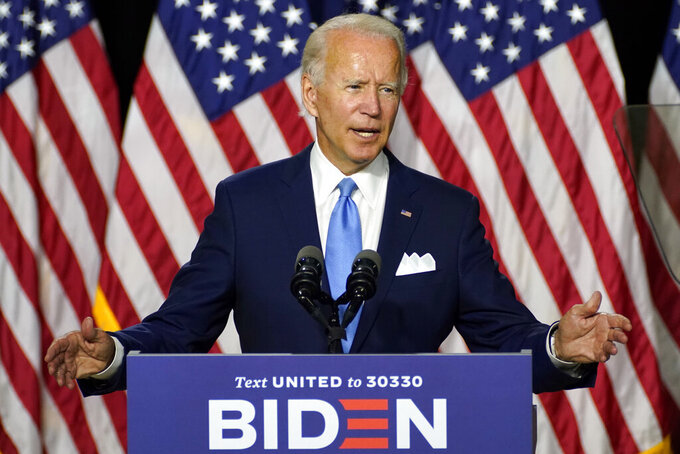 When Joe Biden steps to the podium Thursday night as the Democratic Party’s presidential nominee, he will offer himself to a wounded, meandering nation as balm — and as a bridge.

A 77-year-old steeped in the American political establishment for a half-century, Biden cannot himself embody the kind of generational change that Presidents John F. Kennedy or Bill Clinton represented. Even with wide-ranging proposals for government action on health care, taxation and the climate crisis, he will never be the face of a burgeoning progressive movement. As a white man, Biden cannot know personally the systemic racism now at the forefront of a national reckoning over centuries-old social and economic inequities.

But the former vice president, six-term senator and twice failed presidential candidate draws plenty on lived experience — two generations spent on each end of Pennsylvania Avenue, a record that mixes partisan street-fighting with bipartisan deal-making and bonhomie, and a personal journey of middle-class mores, individual struggle and family heartbreak.

That is how he is presenting himself as the person to lead the country beyond the tumultuous tenure of President Donald Trump.

"There’s great seriousness of purpose here,” said Valerie Biden Owens, the candidate’s younger sister and, until his current White House bid, perennial campaign manager. “We are in a time of struggle. We are in a time a grief,” she continued, nodding to the novel coronavirus, its economic fallout and the reckoning on race. “All of this has come together. My brother appreciates it. He can feel it.”

The electorate ultimately will decide whether Biden in fact offers a bridge back to a pre-Trump version of normal, a path forward to a more equitable society or some combination. Voters' most immediate consideration, though, may be that he is not the incumbent.

“Everything that Donald Trump is, my brother is the polar opposite. I don’t have to make him bigger than he is,” said sister Val. “Joe’s the right person at the right time for all the right reasons.”

Biden has used his convention to showcase what his campaign hopes will be a winning coalition.

Prime-time hours have been generously sprinkled with Republicans. A video highlighted Biden’s friendship with the late Sen. John McCain, the 2008 GOP presidential nominee. Former Ohio Gov. John Kasich endorsed Biden and assured anti-Trump Republicans that he had no worries Biden might make a “sharp left turn” in office.

Biden, though, spent recent months working with primary runner-up Bernie Sanders and other progressives tweaking his policy slate leftward. Those moves reflect Biden’s increasing emphasis on wide wealth and opportunity gaps he says have been “laid bare” by the pandemic's economic effects.

Sanders repeated his support for Biden on Monday and emphasized Biden’s agenda as he urged skeptical progressives to vote affirmatively for the Democratic nominee, not just against Trump.

Younger Democrats to Biden’s left, several who are non-white, have helped fill out the program. It’s a public projection of what Biden tells top Democrats privately in frank acknowledgment of his age: He wants to elevate a new generation, one that looks wholly different from the all-male, nearly all-white Senate Democratic Caucus he joined in 1973.

He underscored the point by selecting California Sen. Kamala Harris as his running mate, making her the first Black woman to join a major party’s national ticket.

Biden sees no inherent conflicts in his wide-net approach, arguing over nearly 16 months of campaigning that the country must relearn how to govern by some semblance of consensus, and that starts with bringing varied voices to the negotiating table.

Part of Biden's ability to make seemingly disparate appeals is that his policy pitches remain secondary to the personal pitch, amplified during the convention, that he is a decent, compassionate man of faith, a practicing Roman Catholic.

While he likes to project an “Uncle Joe” persona, he still flashes the short fuse that was more common decades ago. In Iowa, he told one climate activist to “vote for somebody else.” He challenged a man who questioned his age to a push-ups contest.

Still, empathy more than anger has defined Biden's life, as the vice president who buried an adult son stricken by cancer, the young widower and father who lost his first wife and infant daughter in a car accident, and the schoolboy mocked by classmates and a nun for a severe stutter.

His sister points to that childhood crucible as seminal — and newly applicable in Biden’s campaign against Trump amid the backdrop of a changing electorate.

“When you are bullied, you have a choice to make,” Biden Owens said. “You can become a bully yourself and step on people who don’t look like you or don’t speak like you or whose value you don’t even begin to understand. Or you can choose to realize we are in this together and develop empathy, which is what Joe did. He appeals to your better instincts.”

Biden’s candidacy has met criticism since he launched his bid April 25, 2019, but he heads into the final 75 days of the campaign unscathed by second-guessing.

It's a truism there are no second acts in presidential politics. Biden is on his third. His first White House bid in 1988 flamed out over plagiarism allegations. On his second attempt 20 years later, he barely nudged 1% in Iowa and watched Barack Obama soar to the nomination.

When Obama tapped Biden as his running mate, it looked like his career capstone. Biden has said he wouldn't have run this time if Trump weren’t president. But he did, and he stood out immediately.

In a primary presumed to be about Democrats' ideological rift between progressives and the center-left establishment, Biden took aim at Trump. Sure, Biden sided with the mainstream liberals and moderates on policy, but in his stem-winding, sometimes poorly focused speeches he lamented that Trump was damaging “the soul of the nation.” He often referenced a 2018 book “How Democracies Die.”

None of his rivals, even with routine excoriations of the president, offered themselves quite so plainly as the antidote.

Early on, it didn't work. Biden finished fourth in Iowa, fifth in New Hampshire, and was in danger of collapse. But South Carolina's Black voters, a constituency not significantly represented in the first two nominating states, stood by his candidacy and propelled him to the nomination.

The critical moment came with an endorsement from House Majority Whip Jim Clyburn, the highest-ranking Black member of Congress and a towering figure in South Carolina.

“I know Joe,” Clyburn said in an emotional appeal. “But more importantly, Joe knows us.”

Biden took complete control of the nomination about the same time public health officials urged a national lock-down. So he's spent much of the spring and summer in the same place where he recorded his launch video last spring: his home in Delaware. Yet even with Trump mocking him for “hiding in his basement,” Biden will conclude his convention with a discernible lead in national and most battleground state polls.

Biden will accept the nomination Thursday night without the usual trappings — the boisterous arena, the balloons. He'll speak instead directly into the camera as a relative handful of aides, family and media look on.

“We don’t look at this … as a victory lap,” Biden Owens said, recalling the celebration when he narrowly won his first Senate race before his 30th birthday. “We stormed the convention center in Delaware, in Dover, with high school marching bands. We burst onto the floor with the bands and the cheering.” This year, she said, the “convention reflects the moment.”