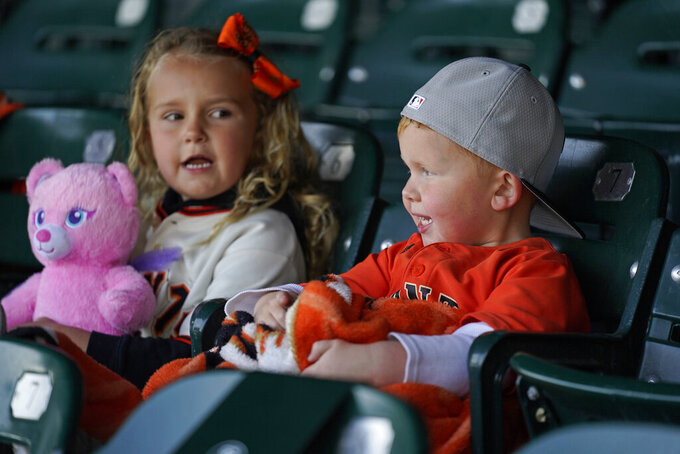 Braxton Moore, 4, and his sister Madison, 6, of Sacramento, Calif., watch batting practice before the start of an opening day baseball game between the San Francisco Giants and the Colorado Rockies, Friday, April 9, 2021, in San Francisco. (AP Photo/Eric Risberg)

SAN FRANCISCO (AP) — With that familiar flair and flip of his dreadlocks, Johnny Cueto entertained everyone once again. And he dominated like the old days, too.

And oh how the baseball-starved San Francisco fans loved every moment of it.

“I like to perform and pump up the crowd,” Cueto said with a smile.

Cueto got within an out of a complete game, Brandon Crawford broke a scoreless tie with a bases-loaded, two-run double in the seventh inning, and the Giants won their home opener 3-1 against the Colorado Rockies on Friday.

Cueto (1-0) struck out seven, walked one and didn’t allow a hit until Raimel Tapia’s sharp single to left with one out in the fifth following C.J. Cron’s four-pitch walk. The Giants then turned an inning-ending double play.

The animated right-hander shuffled out to start the ninth and promptly gave up a pinch-hit triple to Chris Owings and Garrett Hampson's sacrifice fly. Manager Gabe Kapler made a mound visit, and the pitcher could be seen shaking his head no — and he stayed in the game. Fans roared and chanted “Johnny! Johnny!”

“He's a great competitor first of all. He's passed the time with success, and I do think there's a little bit of an entertainer aspect to Johnny, and I think that's a good thing, because he backs it up,” Rockies manager Bud Black said.

“I think he likes being out there. I think he likes the big stage. He's animated, but the thing that's the most important thing is he pitches and he competes. He knows what his job is, and I think it's fine that he does it with a little bit of a flair. I've only heard great things about Johnny Cueto.”

Cueto allowed a single to Trevor Story, his fourth hit allowed, and that ended his dominant day. Cueto threw 118 pitches. Jake McGee finished for his third save.

“I was hoping to get the last out but I knew the manager had the closer ready,” Cueto said.

Crawford delivered with the bases full and one out in the seventh against Tyler Kinley, who relieved Rockies starter Austin Gomber (0-2) after he allowed two walks. Alex Dickerson provided insurance with an RBI single in the eighth.

Charlie Blackmon was ejected by plate umpire Ben May in the seventh for arguing a called third strike by Cueto, who threw a 1-2-3 inning.

“I do think overall Charlie is usually right when he, and for lack of a better word, challenges the umpire on a strike zone,” Black said.

Buster Posey gave the Giants their first hit off Gomber in the fifth with one out. Posey was initially called safe at second on Story's force attempt but the call was overturned on replay review that Story's foot had been on the bag.

Gomber threw 104 pitches in his second start for Colorado since being acquired from St. Louis in the deal that sent Nolan Arenado to the Cardinals in February. Gomber faced San Francisco for the first time in his career after he took a 4-2 loss to the Dodgers on Sunday in his Colorado debut allowing a career-high seven walks.

“As a whole I felt like my attack, my approach, my mindset was way better than the first time out,” Gomber said. “It was fun. He threw the ball really well. I thought I threw well.”

San Francisco, which missed the playoffs on the final day last season, won for the first time in its last four home openers — but has gone 15-7 starting the home schedule while playing at 22nd-year Oracle Park.

Home run king Barry Bonds was among those 7,390 in attendance as fans returned to Oracle Park for the first time since the end of the 2019 season. Bonds was shown on the big screen before the sixth inning and fans cheered and chanted, “Barry! Barry!”

Posey played in front of the appreciative home crowd after he opted out last season to care for premature adopted twin girls.

“He deserves all that support, he's meant so much to the city, this franchise, the players that are on the team right now," Kapler said. “I certainly love when he gets that level of respect.”

The Rockies began a six-game road trip following their first winning series of the season against Arizona.

Bryan Stow threw out the ceremonial first pitch to a standing ovation and cheers, 10 years after the Giants fan was severely beaten outside Dodger Stadium on opening day.

Giants: 3B Evan Longoria had been set to play but was feeling side effects from the one-dose Johnson & Johnson COVID-19 vaccine he received during Thursday's day off. Kapler said the majority of the club's traveling party has now been vaccinated at least with the first round.