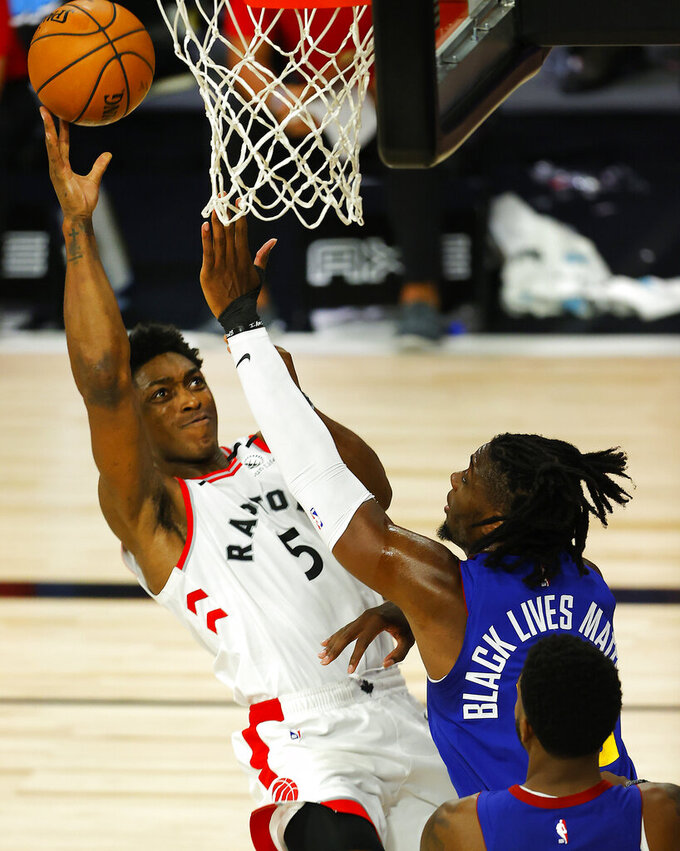 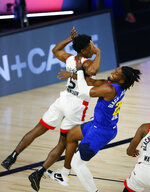 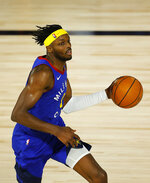 LAKE BUENA VISTA, Fla. (AP) — Stanley Johnson scored 19 of his season-high 23 points in the second half, and the Toronto Raptors closed out their regular season with a 117-109 victory over the slipping Denver Nuggets on Friday.

The seldom used Johnson, who came in averaging 1.5 points per game, hit three 3-pointers and a floating bank shot during a span of less than four minutes in the fourth quarter, helping the Raptors push their lead to 103-92 with six minutes to go.

Denver never pulled closer than seven points after that and lost its third straight to fall to 3-5 in its final eight regular-season games that were played in the NBA's “bubble” in the Orlando area.

“A lot of growth for a lot of players," Raptors coach Nick Nurse said in summing up a regular season that exceeded expectations after last summer's departures of Kawhi Leonard and Danny Green in free agency. "There was a lot of resiliency considering we had a lot of injuries, too.

“Just a good kind of top-to-bottom effort by the crew for certainly the first 60-plus games, and then to re-gather and keep it rolling once we got here, it’s good. It’s a joy to be around this team.”

Both teams entered the game locked into playoff position — Denver the No. 3 seed in the Western Conference and Toronto No. 2 in the Eastern Conference. Regulars for each club played, but their minutes were dialed back.

Denver's Nikola Jokic and Jamal Murray each played about 10 minutes, during which Murray hit three 3s for the bulk of his 11 points.

“The confidence level is very high,” Dozier said. “Once you see one go in, you see another one go in and you're kind of rolling.”

Monte Morris added 16 for the Nuggets.

Toronto combined for 18 3s on 35 attempts, with Johnson and Watson each hitting a team-high four.

“Right now, it's almost comical how bad our 3-point defense is,” Malone added.

Toronto surged into the lead for good late in the first quarter when Terence Davis made consecutive 3s, the second on a step-back move after he'd sent Paul Millsap soaring past him with an exaggerated up-fake.

Soon after, Chris Boucher's free throws started a 14-0 run that included 3s by Malcolm Miller and Boucher, followed by Jonhson's finger roll to give Toronto its largest lead at 39-23.

Denver closed to 54-50 late in the second quarter when Morris hit a cutting layup and a 3 in succession to cap a 9-0 Nuggets run.

Powell's finger roll and Matt Thomas' free throws pushed Toronto's lead back up to 58-50 at halftime.

Raptors: Shot 50% (45 of 90) overall. ... Thomas had his first start this season and Davis his fourth. ... Boucher finished with nine points and nine rebounds in less than 22 minutes.

The 25-year-old Watson, who played in college at Fresno State, has played in just 10 career NBA games — all since January with Atlanta and Toronto.

He appeared in just two games with the Hawks before joining the Raptors on a two-way contract and played just three games with Toronto before the NBA season was suspended because of the coronavirus pandemic.

He has appeared in five games since the season resumed, twice playing more than 20 minutes.

“Being able to go out there and work with the time I’m getting is a confidence builder," Watson said.

Nurse has been encouraged.

Nuggets: Open their first-round playoff series against Utah on Monday.

Raptors: Begin their first-round playoff series against Brooklyn on Monday.