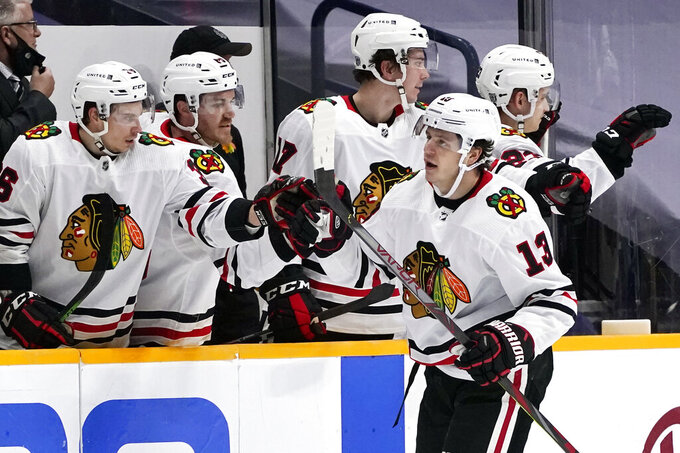 Chicago Blackhawks center Mattias Janmark (13) is congratulated after scoring a goal against the Nashville Predators in the second period of an NHL hockey game Tuesday, Jan. 26, 2021, in Nashville, Tenn. (AP Photo/Mark Humphrey)

Josi, the reigning Norris Trophy winner as the NHL's top defenseman, scored at 2:57 of overtime to give the Nashville Predators a 3-2 victory over the Chicago Blackhawks on Tuesday night.

Yakov Trenin and Mikael Granlund had the other goals for Nashville, which snapped a three-game losing streak.

Dylan Strome and Mattias Janmark scored for the Blackhawks, who won their previous two games.

In overtime, Josi took a pass from Granlund, carried the puck on the right side, cut to the slot and then slipped a shot under goalie Malcolm Subban.

“I saw some space,” Josi said. “(Granlund) made a good play down low. He dropped it to me and I saw that I had some space. From there, I was thinking about just taking it to the net and making a move on the goalie. Luckily it went in.”

Josi has five career overtime winners. Shea Weber, with seven, has the most by a Nashville defenseman.

Subban, who finished with 36 saves, played for the first time since a season-opening loss at Tampa Bay.

“I was happy to get back in there today,” Subban said. “Obviously two points would have been great, but we got one point and you always try to get points when you can. Hopefully we can get two tomorrow.”

At 12:06 of the third period, Granlund scored his second in two games with a one-timer from the left faceoff dot to tie it at 2.

Strome scored the game’s first goal at 2:59 of the opening period.

With the Blackhawks on a power play, Dominik Kubalik’s shot from above the right circle was stopped by Predators goaltender Pekka Rinne, but Andrew Shaw tipped the puck to Strome in the slot, where he beat Rinne low to the stick side.

Rinne made 18 saves to earn his first victory of the season.

“I’m not going to lie, it felt good to win a game,” Rinne said. “It’s been a while since I won a hockey game, so it does feel good.”

Nashville has allowed the first goal in each of its six games this season.

Just inside the Chicago blue line, Trenin stole the puck from Blackhawks defenseman Nikita Zadorov and beat Subban with a quick wrist shot for his first of the season.

Chicago regained the lead at 11:43 of the second when Janmark stepped in front of Matt Duchene’s pass attempt and went in on Rinne on a clear breakaway and beat him to the stick side with a wrist shot.

While Chicago had success on the power play, converting one of two chances, Nashville’s penalty-killing woes continued. The Predators entered Tuesday 30th in the NHL in penalty killing at 55.5%. Nashville’s struggling unit allowed eight goals in 12 opportunities during a two-game road trip to Dallas last weekend.

Nashville finished behind only Buffalo and Detroit in the 2019-20 season on the penalty kill at 76.1%.

After playing their first three home games in front of a few friends and family members, the Predators allowed some fans into Bridgestone Arena on Tuesday night. As part of a collaborative process with local health authorities, the Predators are using a phased-in plan to gradually increase attendance as the season progresses.

The Predators and Blackhawks play again Wednesday night in Nashville to complete the second half of the back-to-back series for the longtime Central Division rivals. It will be the first set of back-to-back games for both teams. Nashville was scheduled to play Carolina on Monday and Tuesday last week, but COVID-19 issues with the Hurricanes prevented the second game from taking place.