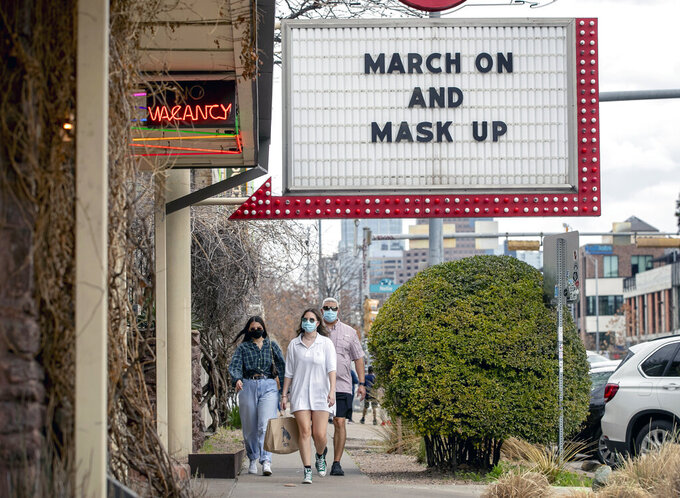 Juan Tenorio and his daughters, Abagail, 20, and Isabel, 18, walk past a sign encouraging masking at the Austin Motel in Austin, Texas, on Tuesday March 9, 2021, the day before the statewide mask mandate was to end and Texas was to open 100 percent. ( Jay Janner/Austin American-Statesman via AP)

The ruling Friday by state District Judge Lora Livingston was at least a temporary victory for local leaders in the liberal state capital who have repeatedly clashed with Abbott over his handling of the pandemic.

Face coverings have only ever been loosely enforced in Texas, which earlier this month became the biggest state to drop COVID-19 restrictions.

“This push to continue masking has never been about laws and enforcement; it’s about communicating a culture of common decency and concern for one another," Austin Mayor Steve Adler said

Republican Texas Attorney General Ken Paxton, who sued the city over the mandate, did not immediately react to the ruling, although an appeal is likely.

The roughly 3,400 patients hospitalized with COVID-19 in Texas are the lowest numbers since October. On Monday, Texas will begin making all adults eligible for the vaccine.

Active cases have fallen below 100,000 to an estimated 97,349, the Texas Department of State Health Services reported Friday, while 118 new fatalities raised the state's pandemic death toll to 46,986.