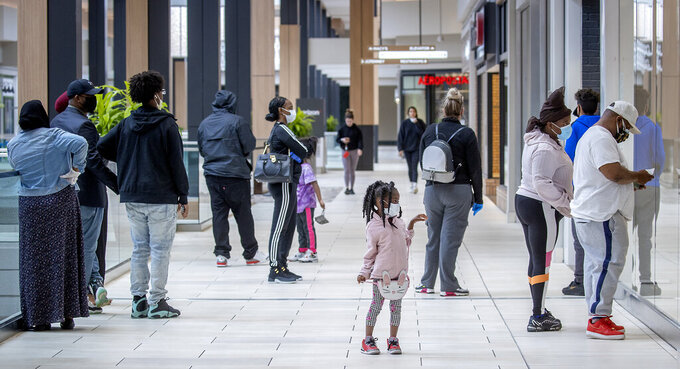 Shoppers made their way through Rosedale Center as some of the stores opened for business during the coronavirus pandemic, Monday, May 18, 2020 in Roseville, Minn. (Elizabeth Flores/Star Tribune via AP)

MINNEAPOLIS (AP) — A judge blocked a Minnesota tavern owner from reopening his chain of six establishments Monday in violation of a state order that bars and restaurants must remain closed to sit-down customers for now to slow the spread of the coronavirus.

Stearns County Judge William Cashman issued the temporary restraining order at the request of Minnesota Attorney General Keith Ellison. It came on a day when many other businesses, including shopping malls, were allowed to reopen for the first time in weeks, now that Gov. Tim Walz has let his stay-at-home order expire. However, retailers must limit the number of people inside to half their normal capacity.

Kris Schiffler had planned to reopen Shady's Hometown Tavern in the central Minnesota town of Albany at noon on Monday. A long line of customers had formed outside by late morning. But after the judge issued the order shortly before noon, Schiffler used a bullhorn to tell the crowd that he had been forced to stay closed.

Minnesota bars and restaurants have been limited to takeout, curbside and delivery service since March 17. The Walz administration is developing guidance that would let then reopen with social distancing and other safety measures, but no sooner than June 1. The plan will be made public Wednesday.

“The COVID-19 pandemic represents one of the greatest public health emergencies Minnesota has endured in recent history," the judge wrote. He set a hearing for Friday.

Schiffler's attorney, Gary Leistico, said they're not trying to contest the authority of the governor or state, “They're just trying to make a living,” he said. He said they tried to work with the attorney general's office but were taken by surprise.

“This is just not good government, in good faith,” Leistico said.

Ellison said in a statement that his office warned Schiffler that he could be fined up to $25,000 for each location that opened. Schiffler also has Shady's taverns in Burtrum, Cold Spring, New Munich, Rice and St. Martin. They're all in or near Stearns County, the state's biggest COVID-19 hot spots outside the Twin Cities with 1,740 confirmed cases as of Monday.

The number of COVID-19 cases continues to rise in Minnesota. The Minnesota Department of Health on Monday reported nine more deaths and 705 new confirmed cases, raising the state's death toll to 731 and its confirmed case count to 16,372. The department said 488 patients were hospitalized as of Monday, including 229 in intensive care.

Some of Minnesota's most popular casinos, which aren't subject to the state's coronavirus restrictions because of tribal sovereignty, announced reopening plans Monday. The Mystic Lake and Little Six casinos near Prior Lake said they plan to reopen on Tuesday next week, with masks required for all guests and employees and seating spaced out. Grand Casinos in Hinckley and Onamia announced similar safety plans, but did not set dates.

A coalition of churches and small businesses that's suing over the state's restrictions said Monday that it would ask a federal judge for a temporary restraining order against the continued shutdown of churches based on the state's prohibitions against gatherings of more than 10 people. The Upper Midwest Law Center, which is representing them, said it's unconstitutional not to allow places of worship to reopen under the same health guidelines as retailers.