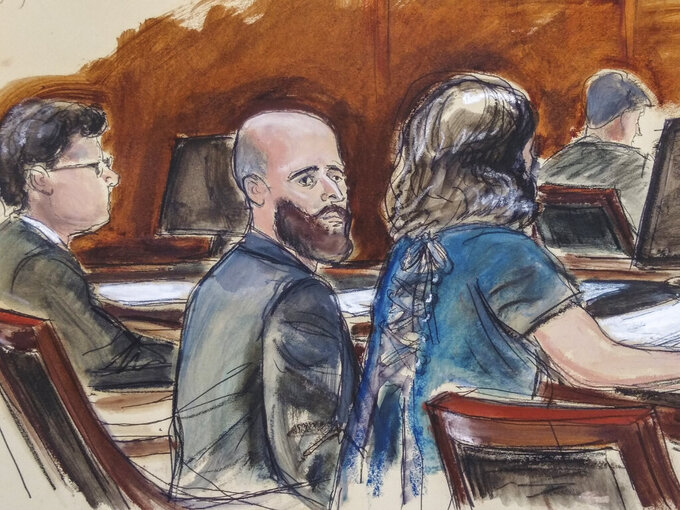 FILE - In this Wednesday, March 4, 2020, courtroom sketch, Joshua Schulte, center, is seated at the defense table flanked by his attorneys during jury deliberations in New York. A judge says Schulte, a former CIA employee, cannot get espionage charges against him dismissed on the grounds that there weren't enough Hispanic or Black individuals on the grand jury that indicted him. (Elizabeth Williams via AP, File)

NEW YORK (AP) — A former CIA employee cannot get espionage charges against him dismissed on the grounds that there weren’t enough Hispanic or Black individuals on the grand jury that indicted him, a judge ruled Wednesday.

U.S. District Judge Paul A. Crotty issued his ruling in the case against Joshua Schulte, finding that there was nothing illegal about a suburban grand jury in White Plains returning the indictment during the coronavirus pandemic rather than a grand jury in Manhattan that normally would have done so.

Schulte faces an October trial on charges that he leaked a massive trove of CIA hacking tools to WikiLeaks.

Schulte, 32, has pleaded not guilty to all charges.

Schulte's lawyers had argued that nine criminal charges alleging that Schulte leaked national defense information to WikiLeaks should be dismissed because the grand jury did not reflect a fair cross-section of the Black and Hispanic populations in the community.

Crotty, though, said the reliance on a White Plains grand jury rather than one seated in Manhattan was necessitated by an “external force,” the pandemic, rather than an effort to exclude certain segments of the population from being empaneled.

He called the decision by prosecutors to seek indictment in White Plains “entirely proper."

Prosecutors say the 2017 release of secrets by WikiLeaks resulted from the largest leak of classified information in CIA history.

Schulte worked as a coder at the agency’s headquarters in Langley, Virginia, where some of the CIA’s digital sleuths design computer code to spy on foreign adversaries.

A jury last year deadlocked on espionage charges, though it convicted Schulte of less serious charges of contempt of court and making false statements. Prosecutors sought a retrial.

Wednesday's ruling may foreshadow the outcome of a similar request to toss out charges in the case against Ghislaine Maxwell, the ex-girlfriend of Jeffrey Epstein charged with procuring teenage girls in the 1990s for him to sexually abuse.

Lawyers for Maxwell, who has pleaded not guilty in a case presided over by a different judge, argued in pretrial motions earlier this year that the White Plains grand jury that returned an indictment against her after her July arrest did not include enough Hispanic and Black grand jurors.