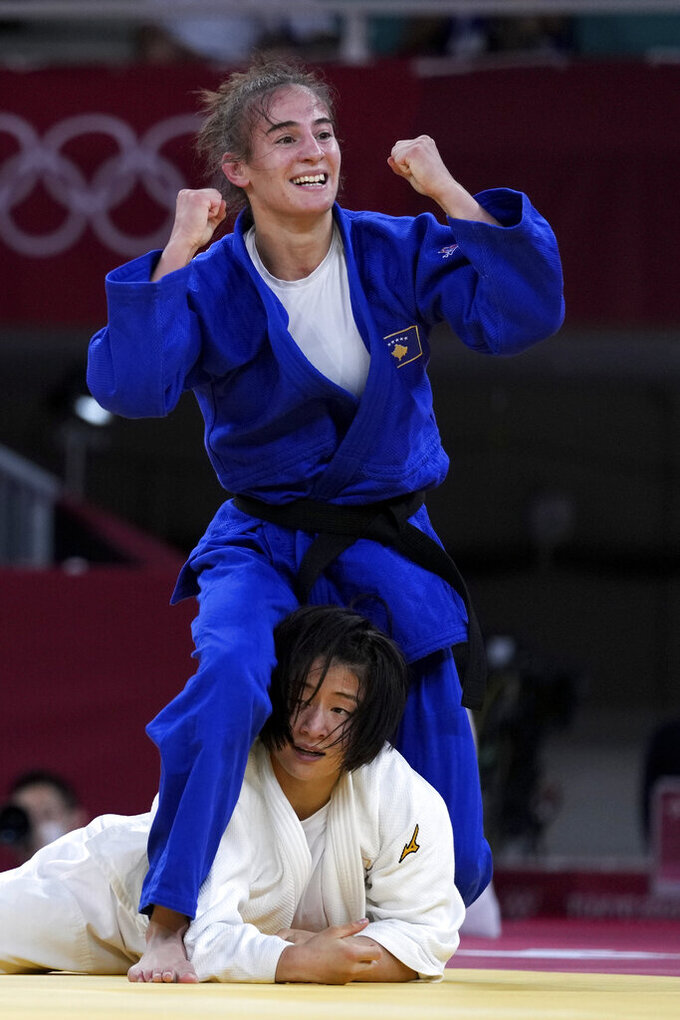 Nora Gjakova of Kosovo, top, reacts as she competes with Tsukasa Yoshida of Japan in their women's -57kg semifinal judo match, at the 2020 Summer Olympics in Tokyo, Japan, Monday, July 26, 2021. (AP Photo/Vincent Thian)

With her country in mourning following the death of 10 people in a road accident on Sunday, the 28-year-old Gjakova took the title with an ippon victory over France’s Sarah-Leonie Cysique in the women’s 57-kilogram division.

She joined Distria Krasniqi, who took the 48kg crown on Saturday, as the second and third gold medalists in Kosovo’s Olympic history. Majlinda Kelmendi won the first at Rio de Janeiro in 2016, also in judo.

“On this mourning day for our people, Nora Gjakova brought light to Kosovo,” President Vjosa Osmani posted on Facebook upon returning from Japan after cutting short her trip due to the accident.

“Our judokas are reaching the heights many countries have dreamed of. They are the best epithet of modern Kosovo,” she said.

Gjakova had reached the final with a shock victory over Japan’s Tsukasa Yoshida.

The 1998-1999 war in Kosovo, then a Serbian province, ended after a NATO military intervention that forced Serbia to withdraw its forces. The United Nations ran the territory for nine years before Kosovo in 2008 declared independence, a move that Serbia doesn’t recognize.

Kosovo has a population of 1.8 million.