Justice, Salango to face off in fall WVa governor's election 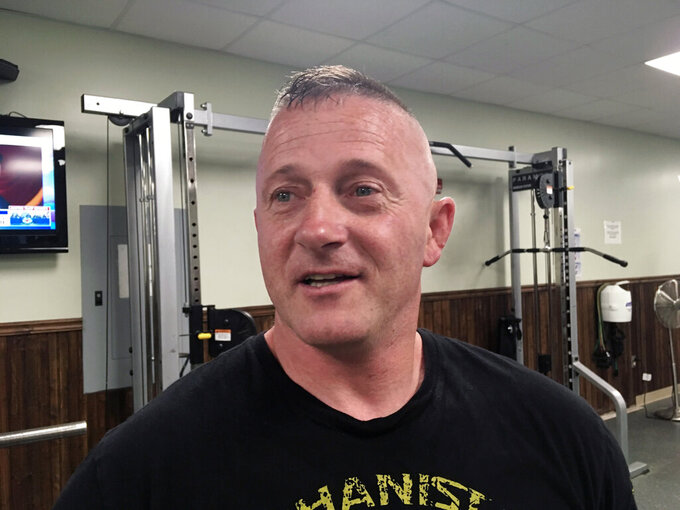 CHARLESTON, W.Va. (AP) — Sweating it out on the state's hottest day of the year, voters on Tuesday were choosing presidential, gubernatorial, U.S. Senate and U.S. House candidates in West Virginia's Democratic and Republican primaries. They also were deciding a majority of the five-member state Supreme Court. The primary was postponed from May 12 because of the coronavirus pandemic. A rundown of the races and the contenders:

Joe Biden won the Democratic presidential primary and Donald Trump won the Republican primary in West Virginia on Tuesday. Both Biden and Trump have secured their respective parties' nominations, Biden last week and Trump in March.

Armstead, a former Republican speaker of the House of Delegates, defeated two candidates, including former Justice Richard Neely, for a 12-year term.

Hutchison defeated two others in a special election for a four-year term.

The primary serves as the general election for the state Supreme Court, whose races became nonpartisan in 2016.

Republican Shelley Moore Capito won the primary for U.S. Senate, where she is seeking her second six-year term. She had two primary challengers: Allen Whitt, president of the Family Policy Council of West Virginia, and former craftsman Larry Butcher.

Capito served seven terms in the U.S. House before becoming the first woman elected to a U.S. Senate seat in West Virginia, in 2014.

This could be the last race for one of the state's three Republican U.S. House members. Analysts have projected West Virginia will lose one of its congressional seats after the 2020 census. The state has lost population for seven straight years.

All three incumbents are seeking reelection this year. David McKinley, who represents the 1st District, has no primary opposition. Alex Mooney, who represents the 2nd District, defeated Berkeley Springs family physician Matthew Hahn and will go after his fourth term in Congress in November against Democrat Cathy Kunkel, an energy analyst who ran unopposed in the primary. Rep. Carol Miller of the 3rd District defeated Russell Siegel of Lewisburg and will face one of four Democrats on Tuesday’s ballot. They were Huntington bus service CEO Paul Davis, labor union executive Jeff Lewis, Hilary Turner of Huntington and doctoral student Lacy Watson. That race was too close to call.

Republican Patrick Morrisey, seeking a third term, had no primary opposition. In November, he will face the winner of the Democratic primary between state Delegate Isaac Sponaugle and attorney Sam Petsonk. The race was too close to call late Tuesday.

Mitch Carmichael, the West Virginia Senate president who was dogged by teacher protests at the statehouse, lost to a teacher in his Republican primary reelection bid Tuesday. Carmichael was defeated by Amy Nichole Grady, a teacher from Mason County who snagged the endorsement of the American Federation of Teachers West Virginia chapter. Grady will face Bruce Ashworth, a roofing business employee who was unopposed in the Democratic primary.

One incumbent who had no trouble winning was Republican Sen. Mike Maroney, even though he is awaiting trial on charges that he solicited a prostitute. The Marshall County lawmaker beat a primary challenger in a blowout.

Maroney pleaded not guilty, turned himself in in August and was released on a $4,500 bond. He has a pretrial hearing set for next week.

Two Democrats were still jockeying Tuesday night to face Maroney in the fall.

Two other Republican senators lost on Tuesday: Sen. John “J.R.” Pitsenbarger, who lost to former Sen. Robert Karnes; and Sen. Sue Cline, who lost to David “Bugs” Stover, who has served as Wyoming County Circuit Court clerk. Stover has no Democratic opponent in the fall. Karnes faces Democrat Denise Campbell in November, both of whom are from Randolph County.

Republican Del. Eric Porterfield, who made disparaging remarks against the LGBTQ community, lost in his reelection bid to a House district that includes three seats.

In February 2019, the Mercer County lawmaker said he thinks LGBTQ groups are “socialists,” ″discriminatory bigots” and “a modern day version of the Ku Klux Klan.” He also called the gay community a “terrorist group.”

Half of the 34 state Senate seats were up for grabs. Seven incumbents had primary opposition, while four senators, including three Democrats, did not seek reelection. Republicans hold a 20-14 majority.

All 100 House seats were on the ballot; 41 incumbents were in contested races. Twenty delegates did not seek reelection. Republicans hold a 58-41 House majority with one independent.

Secretary of State Mac Warner said he knew of no significant or unusual problems at voting places Tuesday. It was the hottest day of the year so far in West Virginia, with temperatures reaching the mid-90s in some communities. Warner's office asked voters to bring bottled water, umbrellas and even a chair in case they encountered long lines and had to stand outside at polling places.

Voters were asked to wear masks and bring their own marking devices such as a pencil or stylus to use with their ballots. The measures are aimed at containing the spread of the coronavirus.

Warner is running unopposed in the GOP primary and will face Democrat Natalie Tennant on Nov. 3. Tennant, also unopposed, served two terms as secretary of state before losing to Warner in 2016.

West Virginia’s longest-serving state treasurer, John Perdue, is unopposed in the Democratic primary and is seeking his seventh term in the fall. In November he will face Republican Riley Moore, a former delegate.

Republican incumbent JB McCuskey and Democratic challenger Mary Ann Claytor will square off in the November race for state auditor. Each is unopposed in the primary. Claytor is a former auditor's office employee who lost to McCuskey in 2016.