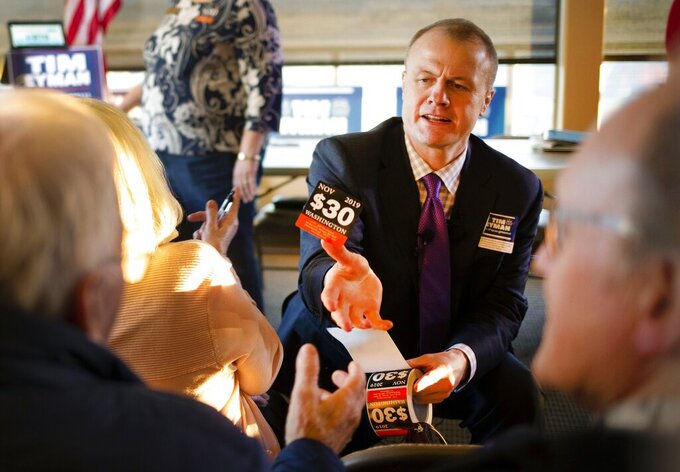 FILE - In this Feb. 12, 2020, file photo, Tim Eyman hands out $30 car tab stickers while greeting supporters before officially announcing his campaign to run for governor of Washington as a Republican at McCormick Air Center in Yakima, Wash. The Washington Supreme Court has unanimously struck down Eyman's Initiative 976, a measure that would have steeply discounted the price of car registrations while gutting transportation budgets across the state. The justices on Thursday, Oct. 15, 2020, said the measure violated the state Constitution's requirement that initiatives be limited to a single subject and said its description on the ballot was misleading. (Evan Abell/Yakima Herald-Republic via AP, File)

SEATTLE (AP) — The Washington Supreme Court on Thursday unanimously struck down Tim Eyman’s Initiative 976, a measure that would have steeply discounted the price of car registrations at $30 while gutting transportation budgets across the state.

The justices said the measure violated the state Constitution’s requirement that initiatives be limited to a single subject and that its description on the ballot was misleading.

I-976 was largely a reaction to car fees imposed in King, Pierce and Snohomish counties to support Sound Transit’s light rail projects. Statewide, voters passed the measure last year with about 53 percent in support, though residents of the three-county region — thanks to Seattle's especially strong support for mass transit — opposed it.

A coalition of cities, King County, and Garfield County’s transit agency brought the lawsuit, saying it would eviscerate funds they need to pay for transit and road maintenance. It would have cost the state and local governments more than $4 billion in revenue over the next six years, according to the state Office of Financial Management.

The challengers cited myriad reasons the measure was unconstitutional, but one of the most prominent was the argument that its ballot title lied about what the measure would do. Using language drawn from the measure itself, the ballot said in part that the measure would “limit annual motor-vehicle-license fees to $30, except voter-approved charges," and then asked voters whether it should be approved.

In writing for eight of the nine justices, Justice Steven Gonzalez called that “deceptive and misleading”: It implied that local taxes approved by voters, such as those used to fund local transit, would survive. In reality, I-976 would have revoked those taxes along with the authority of local voters to approve them in the future.

Seattle had to begin cutting bus hours after a King County judge largely upheld the initiative early this year, gutting a $60 fee that residents had imposed upon themselves to expand bus service. Garfield County said it would have to halve the transportation services it provides to help seniors and disabled people get to the grocery store, the doctor and other appointments.

“Even before the pandemic and economic crisis, Mr. Eyman’s illegal and misleading initiative decimated Seattle’s transportation budget and required cuts that hurt our residents and businesses,” Seattle Mayor Jenny Durkan said in a written statement. “To make it through the COVID-19 pandemic, and to build back stronger and more equitable, we need a transportation system that serves all of our residents.”

Justice Barbara Madsen was the only one who disagreed that the ballot title was impermissibly misleading. However, she did join the rest of the court in finding I-976 unconstitutional because in included more than one subject: One provision demanded that Sound Transit retire or refinance bonds early, at a cost of at least $521 million — a measure unrelated to the main purpose of the initiative, limiting motor vehicle taxes.

The single-subject rule for initiatives is designed to prevent “logrolling,” or including measures popular among certain jurisdictions to obtain a majority vote on an unrelated broader purpose.

Eyman is an anti-tax initiative promoter who has repeatedly seen his voter-approved measures to limit car tab fees struck down by the Supreme Court over the past two decades. He called the latest ruling “beyond maddening.”

“The voters were not confused by this measure,” he said.

Eyman insisted that in order to reduce motor vehicle fees, Sound Transit's bonds had to be retired early or refinanced, though the agency said it would have to raise taxes, transfer money from existing projects and cut service to offset the cost of retiring its debt early.

He called on Gov. Jay Inslee to call a special session of the Legislature to restore I-976 to law. Republican Sen. Steve O'Ban said he would introduce legislation to do so.

“If we fail to act, voters will believe -- and who can blame them? -- that government doesn’t care and doesn’t listen to them after they have clearly spoken through the initiative process," O'Ban said in an email. “Voters deserve car tab tax relief, and they deserve leaders who will listen to them.”

Inslee said he's open to talking with legislators about reforming the car tab system, but suggested it's also important to ensure transit and infrastructure aren't jeopardized.

Washington Attorney General Bob Ferguson, a Democrat whose office defends voter-approved initiatives, said in a written statement he knew it would be a tough case. Alluding to Eyman's prior accusation that the state's lawyers had tried to sabotage the case by not making all the legal arguments Eyman wanted them to, Ferguson thanked his legal team for its hard work.

“Tim Eyman has never written a successful tax initiative that passed legal muster,” Ferguson said. "He should look in the mirror and apologize to voters for once again sending them an initiative that failed to survive a legal challenge and deliver on its promises.”