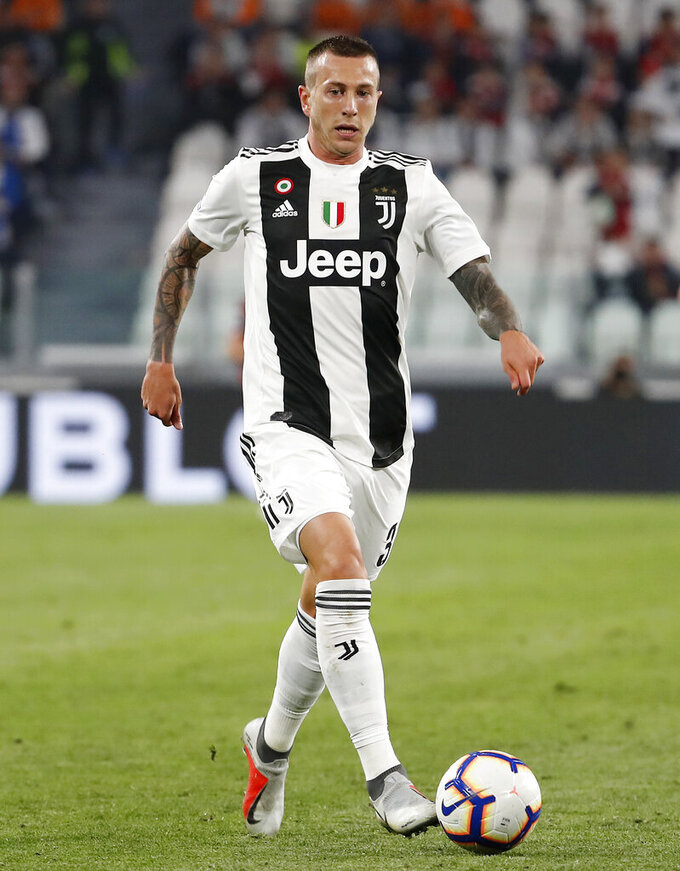 FILE - In this file photo dated Saturday, Oct. 20, 2018, Juventus' Federico Bernardeschi controls the ball during the Serie A soccer match against Genoa at the Allianz stadium, in Turin, Italy. The weeks without playing has given Bernardeschi more time than ever to reflect on his responsibilities as a footballer, revealing Tuesday May 26, 2020, that family comes first as he reflects on sacrifices made by his family to enable him to attain his goals for Juventus and Italy. (AP Photo/Antonio Calanni, FILE)

The weeks without playing have given Federico Bernardeschi more time than ever to reflect on his responsibilities as a footballer.

Family comes first, and the Juventus and Italy forward has thought back to the financial sacrifices by his family that allowed him to embark on the long journey to Serie A.

It began with 3 ½-hour round car trips across Tuscany to training sessions for an 8-year-old Bernardeschi.

“They invested their money in me,” Bernardeschi recalls. “And of course, sometimes we arrived at the end of the month with little money.”

Now, concerns about wider economic hardship are on Bernardeschi’s mind as the country emerges from the coronavirus lockdown. Italy was the initial European epicenter of the COVID-19 outbreak and has seen more than 32,000 known people die from the disease in three months.

“I’m very attached to social issues because in short, my story also represents this a bit,” Bernardeschi told The Associated Press in a video call. “All the difficulties I’ve gone through, all the sacrifices that I’ve made, my family made sacrifices. I’ve gone down that street so I know what it’s like to make sacrifices in order to get to the top and how much you have to sweat."

So Bernardeschi has been trying to help those struggling through the pandemic, backing a fundraising initiative that provided eight portable ventilators for the Humanitas Gradenigo Hospital in Turin, raising more than $80,000.

“For me every public figure that has an influence on other people should do that because it’s only that way that you can give the best example and change things that don’t work, aren’t right."

Bernardeschi has not played for Juventus since March 8, a 2-0 victory over Inter Milan without any fans in Turin before the competition was suspended.

Games closed off to spectators is the way it will be indefinitely when the league resumes — potentially by June 13. It's a tight title race, with Juventus only a point ahead of Lazio in the quest for a ninth championship in a row.

“There is obviously the desire to finish the season but there is also a great responsibility that we can’t not look at, which is the situation of the whole world and of our country," Bernardeschi said. "So we have to do things with a lot of responsibility.”

After weeks of fitness work at home while on lockdown with his partner and young daughter, the rhythm of life as a professional player is returning with Juve back in training.

“All of us are in a great emergency,” he said. “But I think that this moment helps us also to reflect and understand what is important in life because, in short, there are many people who are dying every day in the world and that’s not good. It’s time for us all to come closer together and help each other.”

Fundraising for COVID0-19 relief has inspired Bernardeschi to launch a foundation, with the support of Roc Nation, the agency founded by Jay-Z.

“I mustn’t just be a footballer," he said. “But also an important and influential figure on a social level.”