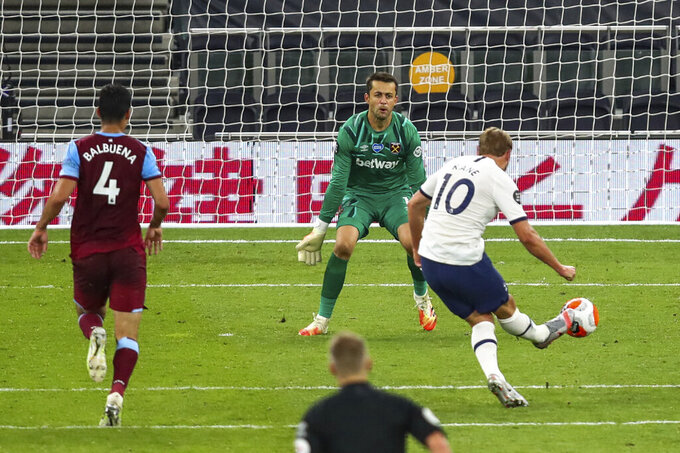 The victory ended Tottenham's four-match winless run in the Premier League — seven in all competitions — stretching back before the three-month pandemic-enforced pause in the season.

The break allowed Kane to recover from the hamstring surgery he underwent in January. So much has changed since he last scored in December — with no fans in the north London stadium due to the coronavirus restrictions.

Kane completed a counterattack in the 82nd minute led by Erik Lamela and Son Heung-min, racing through the defense before slotting the ball into the net.

Son was denied an opener in the first half after VAR spotted he was offside, but Tottenham scruffily took the lead in the 64th minute when Tomas Soucek inadvertently turned the ball into his own net from a corner.

The victory lifted Tottenham into seventh place, a point behind fifth-place Manchester United, which held Jose Mourinho's side to a draw in their first game after the restart on Friday.

Fifth place could secure the final Champions League berth if second-place Manchester City's two-season ban from Europe is confirmed by the Court of Arbitration for Sport next month.

West Ham's fear is dropping into the Championship, with David Moyes' side only out of the relegation zone on goal difference.