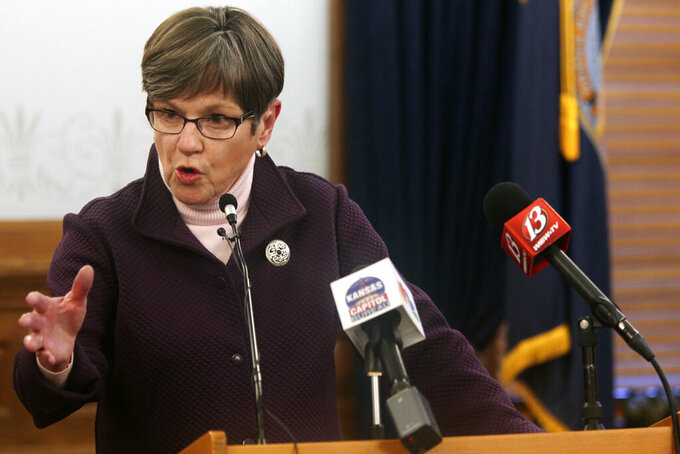 Kansas Gov. Laura Kelly answers questions during a news conference, Wednesday, Feb. 3, 2021, at the Statehouse in Topeka, Kan. The Democratic governor is facing increasingly vocal criticism from the Republican-controlled Legislature over problems at the state Department of Labor, that include a flood of fraudulent claims for unemployment benefits. (AP Photo/John Hanna)

The state House approved a bill drafted by Republican members to give the GOP-controlled Legislature more oversight of the modernization of the state Department of Labor's unemployment system and require computer upgrades to be completed by the end of 2022. The House's 87-36 vote sent the measure to the Senate.

House Republicans say the measure would more quickly modernize an outdated unemployment system. The department has said the House bill’s two-year timeline for the technology upgrade is unrealistic.

Labor union leaders contend the bill does nothing for workers.

Legislators in both parties say they have been flooded with calls and emails from unemployed people who are struggling to get benefits and can't get through to the Department of Labor. The state has acknowledged a flood of fraudulent claims and attempts by scammers and internet bots to access the unemployment system.

Kelly's announcement Wednesday that the Department of Labor would bring on 500 additional “surge” workers to staff its unemployment call center came after the only Democrat in the state's congressional delegation, Rep. Sharice Davids, sent Kelly a letter calling on her to act. The department said the first 77 workers will start next week; others will come on board through mid-April.

“We're still looking for solutions," Kelly told reporters during a Statehouse news conference. "We're going to be scaling up."

Kelly and the department said the call center also would be staffed from 8 a.m. to 5 p.m. Saturday and from 1 p.m. to 5 p.m. Sunday, starting this weekend, and that the state would upgrade its computer servers later this month so it could handle more calls.

Top Republican lawmakers on Thursday were pleased that Kelly was ramping up staffing but argued that her administration has been slow to act.

Senate Majority Leader Gene Suellentrop, a Wichita Republican, suggested the problems with providing legitimate benefits would have been less severe had the Department of Labor been more aggressive earlier about combatting fraud.

“They've got to do something to fix this," said House Majority Leader Dan Hawkins, another Wichita Republican.

The Department of Labor began the pandemic last spring with 20 staffers to help jobless workers and has increased that to more than 450, Kelly said. But it received more than 358,000 calls a day last week, an average of four per second, the department said.

“The staff at the Department of Labor is working around the clock,” Kelly said.