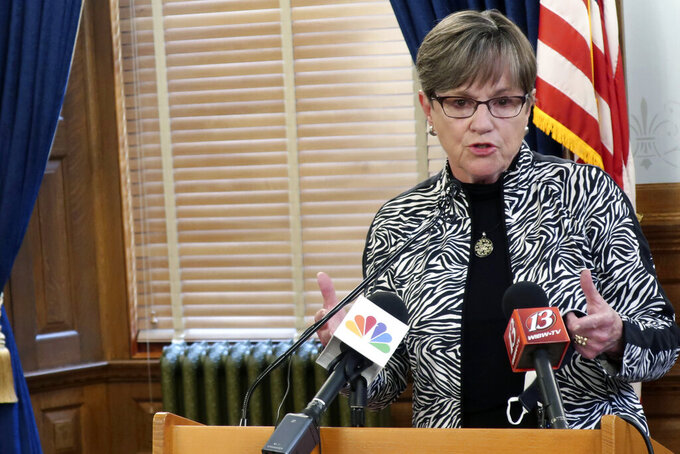 Kansas Gov. Laura Kelly discusses an executive order requiring mask wearing and daily temperature checks in all public and private K-12 schools during a news conference, Monday, July 20, 2020, at the Statehouse in Topeka, Kan. Kelly also wants to delay the reopening of schools from mid-August to after Labor Day but needs the State Board of Education's approval. (AP Photo/John Hanna)

TOPEKA, Kan. (AP) — Kansas' Republican attorney general said Thursday that he believes both counties and local school districts can exempt themselves from the Democratic governor's coronavirus-inspired order requiring schools to have staff and students wear masks.

Gov. Laura Kelly replied in a scathing statement that Attorney General Derek Schmidt is wrong and that he and fellow Republicans have “only created more hurdles and uncertainty" during the pandemic. Schmidt's comments in an Associated Press interview represented the latest instance in which a Republican has undercut an action by Kelly aimed at curbing the spread of the new coronavirus.

Republican officials and conservatives outside government have argued that it’s inappropriate for Kelly to impose “one-size fits all” measures— and hurt the economy— while the rate of reported new coronavirus cases varies widely across the state. Kelly has pointed to a coronavirus resurgence in recent weeks that has pushed the total confirmed cases past 24,000 and COVID-19-related deaths past 300.

The Republican-controlled Legislature successfully pressured Kelly to lift statewide restrictions on businesses and public gatherings on May 26, and the GOP-dominated State Board of Education on Wednesday blocked Kelly’s plan to delay the reopening of K-12 schools for three weeks, from mid-August until after Labor Day. Decisions on business restrictions are left to counties while local boards of education are to determine school reopenings.

Kelly issued her masks-in-schools order Monday, imposing rules for public and private schools that are stricter than guidelines set by the State Board of Education. It also would require schools to do daily checks for fever on all staff and students.

“It's odd position that the administration has taken that their order is somehow is not subject to county opt-out the way all their other orders are,” Schmidt said. “Local school districts have the constitutional authority to opt out.”

The attorney general added that he's had conversations with local officials who have raised the issue of whether they can opt out of Kelly's order. Kansas House Majority Leader Dan Hawkins, a conservative Wichita Republican, raised the issue during a meeting between Kelly and legislative leaders Thursday to review the masks-in-school order.

When Kelly stuck to her position that neither counties nor local school districts can opt out, Hawkins told her: “I won't argue with you. I disagree.”

Schmidt said he told the governor's office of his legal opinion before Kelly issued the order.

"His comments further demonstrate that he and Republican leadership have abdicated their duty to serve the people of Kansas during the worst public health crisis in a century — and instead, put the burden back on local communities,” Kelly told AP in response to Schmidt's stance.

A law enacted last month as a compromise between the Democratic governor and GOP lawmakers allows the state's 105 counties to opt out of Kelly's health orders, such as one she issued July 2 to require people to wear masks in public and at their workplaces. Schmidt said that law applies to the masks-in-schools order.

Kelly said Monday that it doesn't because it involves the state's 286 local school districts, which operate independently of counties under local elected school boards.

The same law required the State Board of Education's approval of Kelly's plan to delay the start of fall K-12 classes or to close school buildings. Kelly ordered K-12 school buildings closed in mid-March for the rest of the previous school year, drawing criticism from conservative GOP lawmakers.

The law doesn't give the state board any authority to reject other Kelly orders, but Schmidt said Kansas law gives local districts “home rule” powers to manage their own affairs. And the state constitution says local public schools “shall be maintained, developed and operated by locally elected boards.”

“I worry this is going needlessly become another flare-up,” Schmidt said.

The attorney general added: “The law is what the law is, and it has to be followed or it has to be changed. It can’t simply be ignored.”