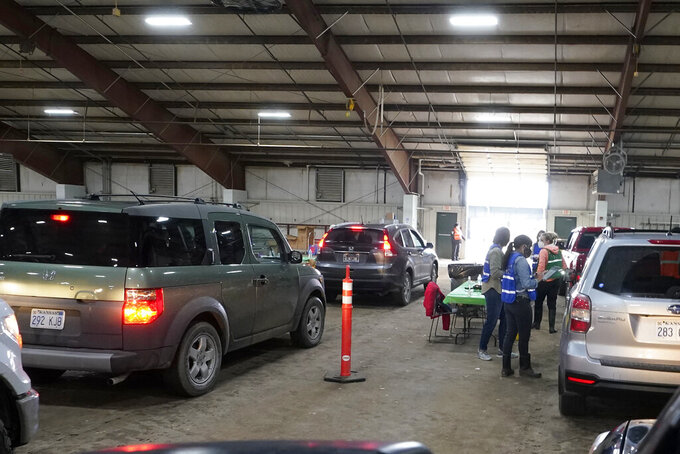 Drive-thru vaccinations are given in a building on the Douglas County Fair Grounds in Lawrence, Kan., Wednesday, March 17, 2021. The fair grounds serves as a mass COVID-19 vaccination location. (AP Photo/Orlin Wagner)

Johnson County Community College is paying employees $250 to get inoculated in the hopes of bringing more students back to campus in the fall, KMBC-TV reported. Spokesperson Chris Gray said the college sees it as “an innovative way to reinforce healthy decisions.”

Colleges throughout the U.S. are taking different approaches to vaccinations, with several already saying they'll require students to get vaccinated before returning to campus in the fall. Gray said Johnson County Community College hopes to have half of its nearly 14,000 students back on campus then.

“Fatigue is there and it’s fatigue of staring at a screen constantly,” Gray said.

District officials said they are sending those students home with rapid-test kits to get a snapshot of how prevalent the coronavirus is within its schools.

The state as a whole also has seen a decline in new confirmed or probable COVID-19 cases in recent months. Kansas averaged 213 new cases a day for the seven days ending Monday, as low as the rolling seven-day average for late June 2020, according to state Department of Health and Environment data.

The department added 483 new cases since Friday to the state's pandemic total, bringing it to 304,719. The health department reported no additional deaths and in fact subtracted eight from the pandemic total to make it 4,930. The department sometimes removes fatalities from the count after a review of death certificates.

As the state has seen a decline in new cases, local officials have eased off mask mandates and other restrictions, and Republican leaders in the GOP-controlled Legislature overturned a policy from Democratic Gov. Laura Kelly seeking to encourage counties to keep mask requirements in place.

But Kansas also is seeing a decline in the number of new people getting tested for COVID-19, according to the health department's data. It peaked at 6,292 a day during November and is 1,255 a day for April.