Kansas expects federal policy to cost it $360M over 3 years 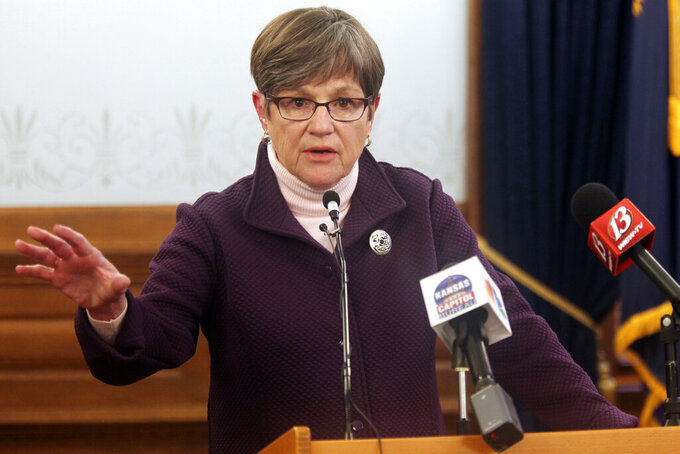 FILE - Kansas Gov. Laura Kelly speaks to reporters during a news conference, Wednesday, Feb. 3, 2021, at the Statehouse in Topeka, Kan. Responding to concerns from state officials, the U.S. Treasury Department said Wednesday, March 17, 2021 that states can cut taxes without penalty under a new federal pandemic relief law — so long as they use their own funds to do so. Kelly, who vetoed two GOP tax-cutting bills in 2019, welcomed the restrictions on using federal pandemic aid to offset state tax cuts. She said Kansas is still “digging out” from several years of budget shortfalls that followed a tax-cutting experiment in 2012-13 under Republican Gov. Sam Brownback. (AP Photo/John Hanna)

TOPEKA, Kan. (AP) — Kansas expects to lose a total of $360 million in tax revenues over three years because of a change in federal policies on COVID-19 relief for businesses, complicating legislative debates over state spending and cutting income taxes.

The disclosure of the state's expected loss is a cloud in what for months has otherwise been a sunny fiscal picture, with tax collections exceeding expectations and the unemployment rate back to lows seen before the coronavirus pandemic. The disclosure this week came as Republicans pushed a bill cutting income taxes through the GOP-controlled Legislature.

“This new deduction will have a negative impact on the state's revenue forecast that had not been accounted for in previous revenue estimates,” the memo said.

Kansas has experienced what many GOP lawmakers see as an unanticipated “windfall” in tax collections from changes in federal income tax laws in 2017 championed by former President Donald Trump. Republican leaders want to provide relief to people and businesses paying more taxes to the state because of those changes, and the GOP's bill would save taxpayers $284 million over three years.

Kelly vetoed two Republican tax-cutting bills in 2019, arguing that they would return Kansas to a nationally notorious, now-mostly repealed tax-cutting experiment in 2012 and 2013 under then-GOP Gov. Sam Brownback that was followed by persistent budget shortfalls. Kelly has not said whether she will veto this year's bill, but she called Thursday for caution.

“We cannot risk passing any tax bill that would put Kansas back into a self-inflicted budget crisis, and jeopardize our COVID-19 recovery efforts," Kelly said in a statement issued as the Department of Revenue reported that tax collections in March exceeded the state's official forecast by more than $52 million, or 9.7%.

The state anticipated taking in $538 million in taxes and instead collected more than $590 million.

Tax collections have been better than forecast for eight consecutive months and all but four months during the past four years. For the budget year that began July 1, the state has collected more than $6 billion, when it anticipated less than $5.8 billion — a difference of 4%, or $233 million higher.

The state reported a seasonally adjusted unemployment rate of 3.2% in February, the latest data available, down from 3.4% in January. The rate approached 13% in April 2020, after Kelly imposed a statewide stay-at-home order.

Kelly's budget staff, Department of Revenue officials, legislative researchers and university economists plan to meet April 20 to issue a new fiscal forecast that will guide lawmakers as they wrap up budget decisions.

The changes approved by Congress in December involve Paycheck Protection Program loans forgiven by the federal government. Congress is allowing filers to claim a deduction for expenses paid with forgiven loans.

The memo from Burghart and Proffitt noted that Kansas has “rolling conformity” with federal tax laws, meaning changes at the federal level “automatically flow through at the state level."

“Kansas tax filers will also be allowed to deduct expenses associated with forgiven PPP loans on their state income tax returns, even though the loans themselves are not included as taxable income,” the memo said.