Kansas to give COVID-19 shots to inmates despite GOP protest 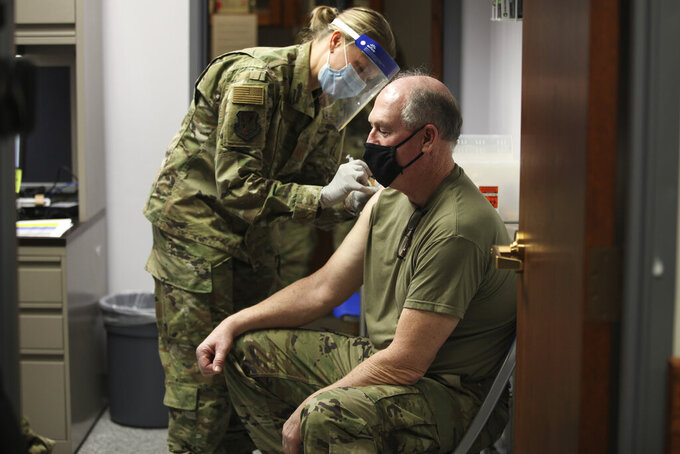 TOPEKA, Kan. (AP) — Democratic Gov. Laura Kelly's administration plans to begin giving COVID-19 vaccinations to Kansas prison inmates next week, ignoring a call from the Republican-controlled Legislature to postpone their inoculations so that others can get them first.

Spokesperson Carol Pitts said in an email that the Department of Corrections has not yet vaccinated any inmates but would start giving them throughout its nine facilities. Her email Thursday came as the Kansas Senate was debating a resolution condemning Kelly's decision to make inmates eligible for shots during the second phase of the state's vaccine rollout, which launched last month.

The Senate approved the nonbinding resolution on a 28-8 vote, with all but one vote for it coming from its Republican majority. The measure calls on Kelly to abandon the policy involving inmates “without delay," but the governor already had signaled her intent to disregard it with her public comments.

“You also have staff in prisons and you have people going in and out of prisons, and so we need to control the spread in our prisons to control the community spread,” Kelly told reporters Friday at a vaccination clinic for Kansas National Guard personnel.

Republican lawmakers have been at odds with Kelly for months over the state's pandemic response, and they are likely to make what they view as mistakes with distributing vaccines an issue as she seeks a second term in 2022.

As of Friday, the state reported that about 218,000, or 7.5% of its 2.9 million residents, had received at least the first of two required COIVD-19 shots. More than 278,000 vaccine doses have been administered to Kansas residents, about 67% of the roughly 413,000 doses sent to Kansas by the federal government.

Kansas averaged 982 new confirmed or probable cases a day for the seven days ending Friday. The state health department added 2,647 cases since Wednesday to its pandemic total, bringing it to 281,562.

The total for COVID-19 deaths in Kansas jumped by 206 since Wednesday to 4,101, but state Department of Health and Environment spokesperson Kristi Zears said part of the increase occurred as death certificates for older and previously unreported fatalities were filed with the agency. The deaths included an unnamed 6-year-old in November, the youngest person in Kansas to die from COVID-19 so far.

The state also reported for the first time Friday that all 105 Kansas counties had at least one reported COVID-19 death.

Public health officials worry that cases, hospitalizations and deaths could rise because of the arrival of a new, more contagious variant first identified in the United Kingdom. The state confirmed its first case this week in Ellis County in northwest Kansas.

Dr. Lee Norman, head of the state health department, said it is now doing genetic testing on the coronavirus in about 30 cases a day to see whether they are tied to variants. He said the department is talking to Kansas State University and a Kansas City-area lab for more genetic testing.

Kelly and the health department are following the advice of public health officials and experts in vaccinating inmates in the second phase, along with people 65 and older, workers critical to the economy and others in group living situations. The prison system had seen more than 1,100 COVID-19 cases among staff and 5,900 among inmates as of Thursday.

“We have from the very beginning responded to this pandemic using the guidelines that are issued by public health experts,” Kelly said.

During Thursday's debate in the Senate, Minority Leader Dinah Sykes, a Lenexa Democrat, also suggested that refusing to give inmates priority could lead to a lawsuit against the state for housing them in substandard conditions.

But Republicans argued that it's wrong for convicted criminals, particularly violent ones and sex offenders, to be in line ahead of tens of thousands of Kansas residents with medical conditions putting them at risk of severe illness from COVID-19. Several GOP senators talked about family members who can't yet get shots. Sen. Jeff Longbine, of Emporia, said his 21-year-old daughter, who has Type 1 diabetes, faces weeks more of being largely confined to her apartment.

“I am supposed to explain to my daughter that she can't live a normal life, that she has to stay home and manage her blood sugar to the best of her ability, because we're going to give vaccines to prisoners first?” Longbine said. “I've got a problem with that.”

The resolution was drafted by Senate health committee Chair Richard Hilderbrand, a Galena Republican, and he said he opted for a nonbinding “strong statement” from the Senate because a bill to overturn Kelly's policy might not get through both chambers before all inmates got their shots — and the governor would likely veto it.

The resolution calls development of vaccines a “triumph of American ingenuity.” It also cited “the previous Presidential administration’s ability to accelerate and distribute a vaccine for COVID-19,” despite a rocky distribution rollout during the final weeks of former President Donald Trump's administration.

Sen. Tom Holland, a Baldwin City Democrat, derided the debate as “political theater” and the resolution as “a political stunt.”

Meanwhile, some people eligible for vaccines continue to resist getting them. The Topeka Capital-Journal reported that about 70% of the 212 employees of the Corrections Department in Shawnee County declined COVID-19 shots or didn't respond when offered them.