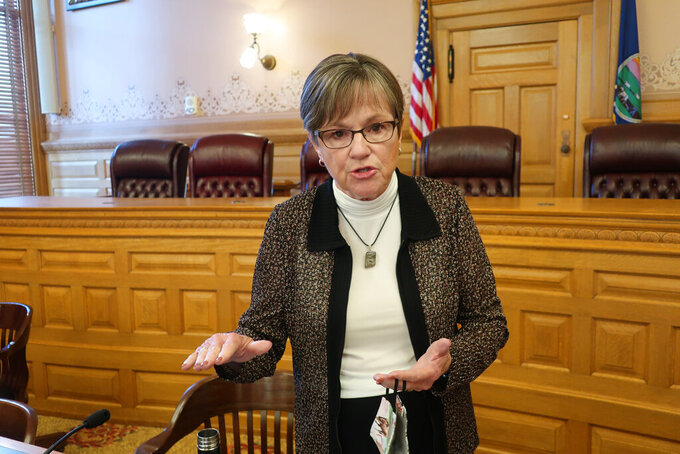 Kansas Gov. Laura Kelly answers questions from reporters following a meeting with legislative leaders about budget issues, Friday, June 26, 2020, at the Statehouse in Topeka, Kan. The Democratic governor is locked in a partisan dispute with the Republican-controlled Legislature over her plan to close a projected shortfall tied to the coronavirus pandemic. (AP Photo/John Hanna)

TOPEKA, Kan. (AP) — Kansas' Democratic governor is locked in a new partisan dispute with the Republican-controlled Legislature over her plan to largely paper over a massive budget shortfall tied to the coronavirus pandemic with short-term accounting moves.

Republican legislative leaders argued Friday that measures outlined by Gov. Laura Kelly's budget director to balance the next budget merely push most of the state's financial problems off a year — and back into the Legislature's lap. The plan avoids cuts for public schools, social services and highway projects.

The dispute came to a head this week when Kelly asked legislative leaders for permission to move $900 million into Kansas' main bank account from other government accounts so that the state can keep meeting its payroll and making payments to public schools on time. It's been a routine practice over the past two decades, necessary because tax collections aren't steady, causing the state's main bank account to become periodically short of funds.

Kelly met with legislative leaders Thursday afternoon to get their permission for moving the funds, but top Republicans refused, seeking a few more days to review her budget plan. A miffed Kelly immediately called another meeting for Friday morning and obtained their approval — after GOP leaders excoriated her as she sat without responding.

“The plan that you gave us passes the buck," Senate President Susan Wagle, a Wichita Republican and vocal Kelly critic told the governor. “You are refusing to lead.”

The back-and-forth showed that partisan rancor over the budget is all but certain to continue into next year. Kelly advocated a bipartisan approach to governing when she took office in January 2019, but she and GOP leaders have scrapped regularly, particularly over her response to the coronavirus pandemic.

Kansas law gives the governor broad power to revise the budget to head off a shortfall when the part-time Legislature is not in session. Republican leaders had projections from their staff Friday showing that pushing off the state's financial problems another year causes them to snowball, making lawmakers' budget work tougher when they reconvene in January.

The state is facing a projected shortfall of between $600 million and $700 million, or between $7.5 and $9%, for the 2021 fiscal year that begins July 1. State officials in April slashed projections for tax collections because of the economic slowdown from the coronavirus pandemic.

Kelly lifted statewide restrictions on businesses and public gatherings May 26, after weeks of complaints from Republican lawmakers that she was moving too slowly to reopen the economy. Rules were left to the state's 105 counties, and Kansas has seen a recent spike in reported coronavirus cases.

The governor said after Friday's meeting that she's trying to avoid damaging public schools, roads and services. She has repeatedly irritated GOP lawmakers by arguing that former Republican Gov. Sam Brownback crippled state government with a now-reversed experiment in cutting income taxes in 2012 and 2013 that was followed by persistent budget woes.

“When we come out of this, I want to make sure that the foundation is still in place for us to grow,” Kelly said.

Kelly and fellow Democrats also hope Congress will approve coronavirus relief funding to help state and local governments with budget problems. Republicans in Kansas and Washington have criticized that idea.

“We may be talking about a problem here that won't be as large a problem as foreseen,” said Senate Minority Leader Anthony Hensley, a Topeka Democrat.

Kelly's budget-balancing plan does include $40 million in unspecified spending cuts and pares back spending increases in multiple agencies, though her budget director said the trimming shouldn't restrict operations.

Among other accounting moves, the plan would delay repaying $264 million in interest-free internal borrowing used to cover past budget holes. A law enacted this year says half that amount must be paid Tuesday, and Republicans questioned whether skipping the loan repayment is legal.

“It's not really addressing a lot of issues that we know we're facing,” said House Speaker Ron Ryckman Jr., a Kansas City-area Republican.