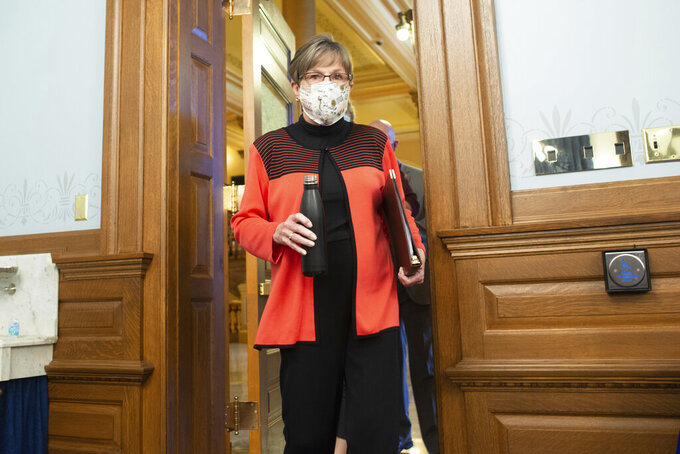 Kansas Gov. Laura Kelly enters a press conference where she announced Monday, Aug. 17, 2020, that she is extending a two-week eviction and foreclosure moratorium, citing lack of Congressional action, Monday at the Statehouse in Topeka, Kan. (Evert Nelson/The Topeka Capital-Journal via AP)

TOPEKA, Kan. (AP) — Gov. Laura Kelly on Monday imposed a new ban on evictions and foreclosures on home mortgages in Kansas because one federal program to aid unemployed workers has expired and she isn't sure that the state will participate in an alternative offered by President Donald Trump.

Kelly's order prevents landlords and lenders from initiating efforts to remove people from their apartments or homes if they can't pay their rent or make their mortgage payments because of financial problems resulting from the coronavirus pandemic. Kelly's executive order took effect Monday and is remains in effect until Sept. 15.

The governor said she might extend the order longer if Congress does not approve another coronavirus relief package. She also said that she recognizes that her new order will burden landlords and home lenders, and her administration has started to look for ways to provide relief to them.

A federal program providing an additional $600 a week to unemployed workers expired at the end of July. Trump issued an executive order earlier this month offering $300 a week in extra benefits, with an extra $100 available to jobless workers if states cover the cost. Kansas has yet to sign up for either version, and Kelly questioned whether Trump has the power to bypass Congress.

Meanwhile, the governor said during a Statehouse news conference, “No Kansan should be kicked out of their home during the pandemic. That's just wrong.”

Kelly issued her latest executive order as Kansas reported its biggest seven-day increase in novel coronavirus cases since the pandemic began and the total number exceeded 35,000.

The governor issued an order barring new evictions and mortgage foreclosures in mid-March but let it expire on May 26, when she also lifted statewide restrictions on businesses and public gatherings. At the time, a Kelly spokeswoman said she was comfortable lifting the ban on evictions and foreclosures because “we are transitioning into the recovery period.”

Kelly said she worries that trying to administer Trump's new program for extra unemployment benefits would create “chaos” and delay payments to jobless workers. She said providing an extra $100 a week would cost Kansas more than $40 million a month when its resources are stretched thin.

“We don’t know the legality of all the other stuff that’s just come out,” Kelly said. “What Congress needs to do is go back and just reinstate what was already there and save states the hassle.”

The state Department of Health and Environment said Monday that Kansas had another 1,282 confirmed and probable cases since Friday, an increase of 3.8%, for a total of 35,167.

The state reported 3,437 new cases since Aug. 10, for a seven-day average of 491 new cases a day. The previous high for the pandemic was 479 cases a day for the seven days ending July 17. Kansas has seen reported cases double over the past six weeks.

However, fewer cases appear to be resulting in COVID-19-related deaths. The state health department reported an additional three deaths Monday to bring the pandemic total to 405. Those deaths represent 1.15% of the total reported confirmed and probable cases, the lowest percentage since the state reported its first death in March.

New cases have prompted some of the state's 286 local school districts to delay the reopening of K-12 schools until after Labor Day, though some district began reopening last week.

The state's largest school district, Wichita, confirmed Monday that six of its schools had a positive case each. Spokeswoman Susan Arensman said all of them involved faculty or staff.

The Wichita district has delayed the start of fall classes until Sept. 8, but teachers have worked from their classrooms this month to participate in online training sessions. Arensman said the positive cases were “not related to any district-related activities.”

In northwest Kansas, the Colby district announced last week that “one or more individuals” who attended middle school and high school meetings about sports earlier this month tested positive for COVID-19. Superintendent Katina Brenn did not respond Monday to an email requesting comment.