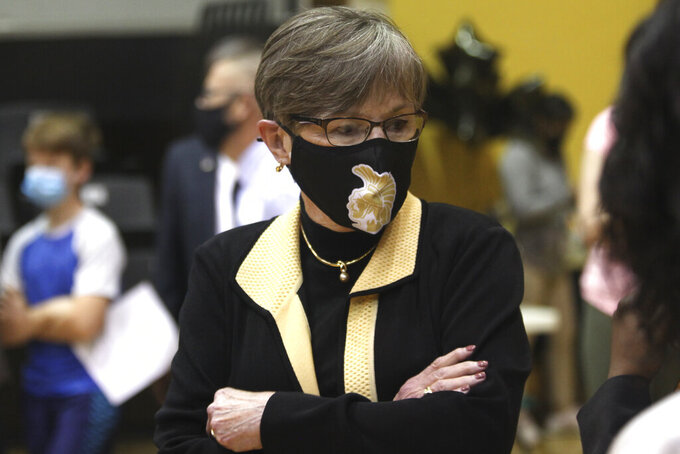 In this Monday, May 17, 2021, photo, Kansas Gov. Laura Kelly tours a COVID-19 vaccination clinic for students aged 12 through 15 set up in a gym at Topeka High School in Topeka, Kan. The Democratic governor is under increasing pressure to end an extra $300 a week in benefits for unemployed workers, with critics of the aid arguing that businesses are having problems hiring enough workers because of it. (AP Photo/John Hanna)

They did so in response to a letter Tuesday to Kelly from the Kansas Chamber of Commerce and 180 organizations arguing that many businesses forced to restrict operations during the coronavirus pandemic now are having problems hiring enough workers “to return to full capacity.” The signers included businesses, trade associations, other groups and even a few public agencies.

The extra benefits are part of the $1.9 trillion in federal coronavirus relief approved by Congress in March and are set to expire in September. More than 20 states with Republican governors have opted to end the benefits early, including neighboring Missouri. Kelly said last week that she is reviewing the issue.

“Many employers are finding it nearly impossible to fully staff their businesses which impacts the supply chain and timely delivery of goods and services,” the Kansas chamber's letter said.

Many Republicans argue that the additional benefits discourage people from accepting employment. An analysis by Bank of America economists found that people who had earned $32,000 or less at their previous jobs can receive as much or more income from jobless aid, and some unemployed workers say the extra benefit has allowed them to take more time to look for work and puts pressure on employers to raise wages.

Other factors also help explain why unemployed workers might be reluctant to take jobs.

Some worry that working in hospitality or other service businesses will expose them to COVID-19, according to government surveys. Many women have had to leave the workforce to care for children still in online school for at least part of the week, though Kansas is requiring all of its public school districts to offer in-person classes for all students.

The nonpartisan, left-leaning Economic Policy Institute said in a blog post last week that some labor shortages have occurred for hospitality and leisure businesses, where wages are typically low, but that they shouldn't spill into other industries. Furthermore, it said, cutting off the extra benefits could hurt the economy, adding that goal shouldn’t be to “chase” as many adults into jobs as possible but “to provide good options and economic security for all.”

The Kansas chamber's letter suggested that federal money could be redirected to employee signing bonuses, help with child care and job retraining.

Republican U.S. Sen. Roger Marshall publicly called on Kelly last week to end the extra benefits. He fellow Republican Sen. Jerry Moran and the three Kansas Republicans in the U.S. House all sent her a letter Monday urging her to do so.

Kelly's office did not respond Wednesday to the calls for her to end the extra benefits but pointed to a statement last week saying she would “monitor this situation closely” but is focusing on recruiting businesses and creating jobs.