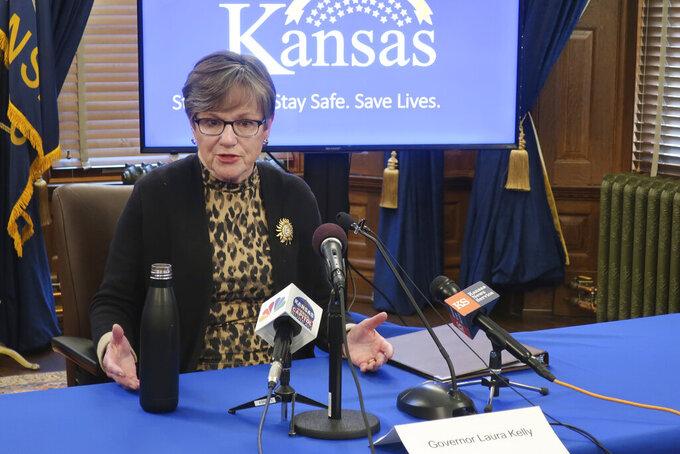 In this photo taken Wednesday, April 15, 2020, Kansas Gov. Laura Kelly answers questions about the coronavirus pandemic, during a news conference at the Statehouse in Topeka, Kan. Kelly faces a federal lawsuit filed by two churches and their pastors over an order she issued limiting religious gatherings to 10 or fewer congregation members. (AP Photo/John Hanna)

TOPEKA, Kan. (AP) — Two Kansas churches and their pastors filed a federal lawsuit Thursday against Gov. Laura Kelly over an order banning religious gatherings with more than 10 people to help slow the spread of the new coronavirus, arguing that the directive violates their religious and free-speech rights.

The lawsuit comes eight days after top Republican legislative leaders attempted to revoke Kelly's order themselves, only to see the Democratic governor thwart their efforts by contesting their action before the Kansas Supreme Court. The state's highest court let her order stand on technical grounds, without deciding whether it violated freedoms guaranteed by the U.S. or Kansas constitutions.

The lawsuit also comes with Republicans in the GOP-controlled Legislature pressuring Kelly to outline a plan for lifting a separate stay-at-home order for all 2.9 million Kansas residents to help the economy recover.

The lawsuit filed in the U.S. District Court for Kansas also alleges that Kelly's order violates the churches and pastors' right to assembly, guaranteed along with religious and free-speech rights by the First Amendment to the U.S. Constitution. It also contends that it violates a state law meant to protect religious freedom.

“The State does not have a compelling reason for prohibiting church services where congregants can otherwise practice adequate social distancing protocol,” the lawsuit said.

Both churches had congregation members sit 6 feet apart, in line with public health recommendations on social distancing and took numerous other steps, such as not using collection plates, the lawsuit said.

Kelly spokeswoman Dena Sattler said the governor's office is reviewing the lawsuit but added, "This is not about restricting religion, it is about keeping people safe and saving Kansans’ lives.”

The number of coronavirus cases and COVID-19-related deaths are still rising in Kansas. The state reported 1,588 cases as of Thursday, with 80 deaths.

For most people, the new coronavirus causes mild or moderate symptoms that clear up in two to three weeks but for some, especially older adults and people with existing health problems, it can cause more severe illness or death.

Kelly's statewide stay-at-home order took effect March 30 and is set to remain in effect until May 3. It exempts “essential" activities such as buying groceries and obtaining medical care.

The lawsuit argues that Kelly's order limiting church gatherings to 10 or fewer members of a congregation discriminates against and “shows hostility" toward churches when many secular businesses still can operate.