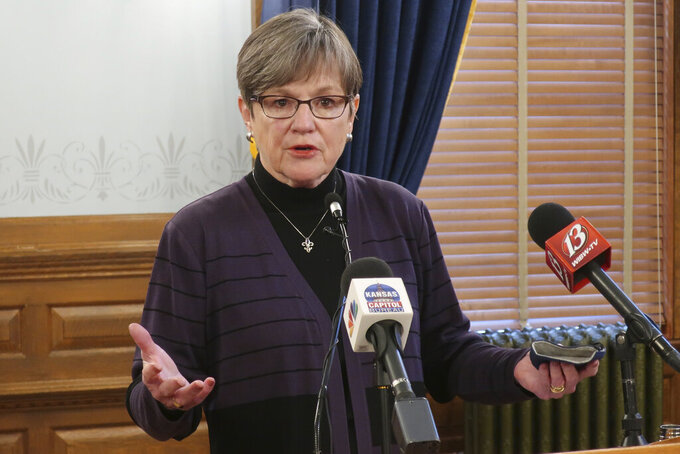 Kansas Gov. Laura Kelly answers questions during a news conference, Wednesday, Jan. 13, 2021, at the Statehouse in Topeka, Kan. The Democratic governor is dismissing criticism of her budget proposals from Republican legislators as an expected negotiating tactic. (AP Photo/John Hanna)

Kelly's $20.9 billion spending plan for the budget year that begins July 1 would protect a previously promised increase in funding for public schools, pay for upgrades in state computer systems and provide a 2.5% pay increase for state workers. It also would make reductions in some agencies' spending so that the state would end June 2022 with a projected financial cushion of more than $680 million.

But the governor proposed reducing the state's annual contribution to its pension system for teachers and government workers to free up funds for programs — an idea that Republican majorities rejected in 2019 and 2020. She is renewing her push to expand the state's Medical health coverage for the needy, which GOP leaders oppose.

Kelly also proposed imposing the state's sales tax on online music and movie purchases and on sales through websites such as Etsy and eBay to raise $86 million a year. Republican leaders last year derided that idea as a “Netflix tax" and have made cutting income taxes a top priority this year.

“It just seems like we just keep going back to the same methods,” said House Appropriations Committee Chair Troy Waymaster, a Bunker Hill Republican. "Why are we trying to resurrect components of a budget that for the most part is not going pass the Legislature?”

“Even as we navigate the COVID-19 pandemic, my budget is fiscally sound,” she said during a Statehouse news conference. “It maintains investments in core services, like education, infrastructure and economic development.”

A fiscal forecast issued by state officials and legislative researchers in November was sunnier than the previous one, and tax collections through December still were 1.7% higher than expected. That for now has all but eliminated a projected shortfall for the next budget year, but the state’s employment picture also worsened in December, nine months after the pandemic reached Kansas.

“There are signs of improvement in the economy across a couple of different sectors, but the economic outlook does remain uncertain across the nation,” Adam Proffitt, Kelly's budget director, told lawmakers during a presentation on her proposals.

The spending covered by the state's general tax revenues would rise by 1.2%, to nearly $8 billion, reflecting Kelly's commitment to higher funding for public schools in line with a law enacted in 2019 to settle a lawsuit over education spending. Total spending from all sources, including federal funds, would remain just shy of $21 billion.

Kelly's plan would leave $601 million in cash reserves, plus another $82 million in an emergency budget stabilization fund.

But Kansas could have such a financial cushion and finance Kelly's spending proposals because her plan would give the state another 10 years — until 2046 — to close a long-term, $9 billion gap in funding for the state pension system. Kelly's move would free up $159 million during the next budget year by dropping the next annual pension contribution by 24%.

The state in 2012 committed itself to an aggressive plan of rising annual contributions to the pension system to close its long-term funding gap, something squeezing annual state budgets.

But Kelly's plan comes with a long-term cost of $4.6 billion in extra interest payments over 25 years. The state pension system is 70% funded, and some Republican lawmakers want to wait at least a few more years before considering a new, less aggressive schedule of pension contributions.

Meanwhile, Kelly and her aides pitched the proposed “Netflix tax" as a matter of fairness, arguing that Kansas businesses with physical stores are at a competitive disadvantage because they have to collect the state's 6.5% sales tax.

“These provisions are merely updates to the tax code, which was written before the days of online shopping and streaming,” Kelly spokesperson Lauren Fitzgerald said.

Republican lawmakers immediately were skeptical that the tax proposal would raise as much as Kelly estimates and said the state's taxes already are too high.

Legislators expected Kelly to push again for Medicaid expansion, and her plan is designed to provide coverage for an additional 165,000 people, starting in 2022.

Her budget says the state would spend $19 million over the first six months but that the rest would come from $541 million in federal funds. Kansas is among only 12 states that haven't expanded Medicaid in line with the 2010 federal Affordable Care Act championed by former Democratic President Barack Obama.

Republicans question whether the state's costs will be so low and their leaders have said they have different priorities, including helping small businesses hurt by the pandemic.