Kansas plan could give $500M in COVID relief to businesses 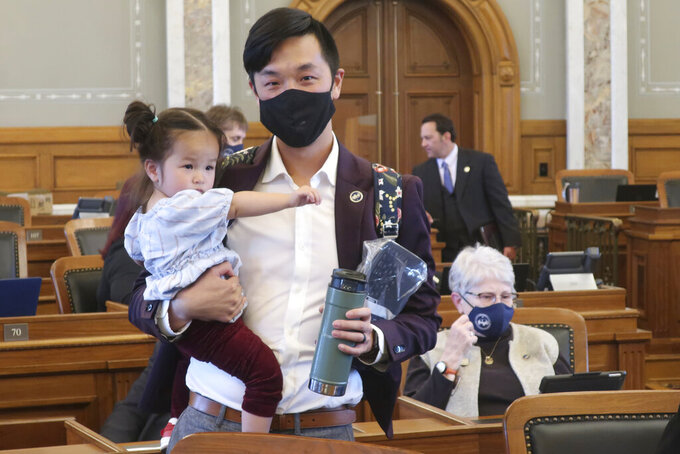 The measure would require the state, cities and counties to set aside part of their federal coronavirus relief funds to pay claims from small businesses. It was the last bill lawmakers considered before shutting down their annual session except for a formal adjournment May 26.

The Republican-controlled Legislature approved a bipartisan public school funding bill and finished a $21 billion state budget for the fiscal year that begins July 1. The budget also included provisions to prevent the state from issuing COVID-19 vaccine passports and to restrict efforts to track down close contacts of people with the virus.

Democratic Gov. Laura Kelly signaled that she plans to sign the education bill, and she's expected to approve most to all of the budget's items. But she has not said what she'll do with the business-compensation bill.

Supporters said creating a system for considering and paying claims could avoid a larger total payout from potential lawsuits over COVID-19 restrictions, but doing so would help small businesses that cannot afford to hire attorneys to sue state or local officials.

“This process is perfect for them,” said Ryan Kriegshauser, an attorney for a Wichita fitness studio and its owner, who sued the state in December. “That’s really what it’s for, is the mom and pop shops that got shut down, because a lot of the big box retailers, they were operating.”

The relief funds would go to businesses with 50 or fewer employees that gave up their right to sue by filing a claim with the state. Larger businesses still would have to sue to get compensation and the state could face additional costs, but lawmakers argued that small businesses were harmed far more by pandemic restrictions.

The votes on the bill were 68-42 in the House and 24-14 in the Senate, demonstrating that at least a few Republicans in each chamber had misgivings and Democrats in both were overwhelmingly opposed.

The measure is a response to the lawsuit filed by Kriegshauser's clients, believed to be the only one of its kind.

“There's likely more litigation coming, and we hope that this will cut down on that litigation and put in place a fairly simple process,” said House Judiciary Chair Fred Patton, a Topeka Republican.

The Wichita fitness studio and state Attorney General Derek Schmidt, a Republican now running for governor, agreed to put the fitness studio’s lawsuit on hold to give the Legislature a chance to provide compensation. GOP lawmakers considered compensation figures as high as $2 billion, and the Senate passed a plan this week for $700 million.

The House had not debated any plan until it considered the one lawmakers ultimately passed early Saturday.

The bill reflects Republican lawmakers' view that Kelly's early handling of the pandemic hurt damaged the economy and restrictions didn't need to be as strong as they were.

Kelly imposed a stay-at-home order for five weeks last spring and then started a phased reopening of the the economy before Republican lawmakers intervened and gave local officials control over restrictions. She continues to defend her actions as crucial early in the pandemic, when state officials feared that a big, early surge in COVID-19 cases would overwhelm hospitals and Kansas scrambled to find personal protective equipment and testing supplies.

Democrats also suggested that lawmakers weren't doing enough to ensure that businesses receiving compensation used some of the money to help their workers. Others opposed forcing cities and counties to set aside coronavirus relief funds for the compensation and questioned whether the state has the authority to do it.

And some were upset that an appointed, three-member board would review claims — in meetings closed to the public to protect businesses’ financial information. Its decisions would be reviewed by a joint legislative committee, and legislative leaders would have the final say.

“Really, this could be back-door deals,” said Senate Minority Leader Dinah Sykes, a Lenexa Democrat. “I have some serious concerns that we don't have enough transparency.”

Meanwhile, conservatives pushing for a ban on vaccine passports and limits on contact tracing had to settle for the provisions in budget legislation that would be in effect for a little more than a year.

Conservatives saw vaccine passports as a threat to privacy and personal liberty, even though Kelly said last month that none would be issued by her administration.

The budget legislation would prevent any state agency from spending any funds on issuing passports or requiring them to go into "a place accessible to the general public.” But the ban wouldn’t apply to cities and counties.

Another budget provision would allow the state Department of Health and Environment to spend money on tracing only if participation was voluntary and the tracing did not use cellphone location data.

The Legislature enacted limits on COVID-19 contract tracing last year at Schmidt’s urging, preventing people with the virus from being forced to disclose close contacts. He saw them as a way to protect people’s privacy, but those rules expired May 1.