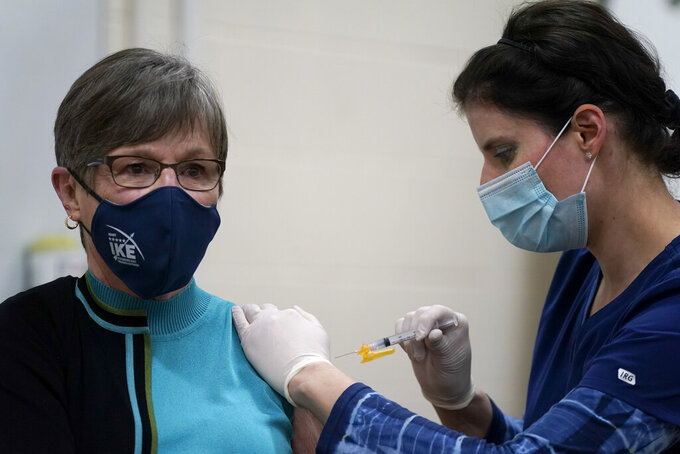 TOPEKA, Kan. (AP) — Kansas has requested less than 9% of its federal allocation of COVID-19 vaccine doses for this week, as Republican state lawmakers try to revive proposals to ban government vaccine passports and restore limits on tracing the close contacts of people exposed to the virus.

Democratic Gov. Laura Kelly's office said Thursday that the state asked for fewer than 14,000 vaccine doses for the week, out of a federal allotment of almost 162,000. While the state sought its full allotment of 6,400 doses of a one-shot vaccine made by Johnson & Johnson, it requested only 7,510 doses of its allocation of 155,540 doses of two-shot vaccines manufactured by Pfizer and Moderna.

Kelly spokeswoman Reeves Oyster said the state ordered less than its allotment “to ensure that no vaccine goes to waste.”

“Last week, providers cited low demand and sufficient inventory to handle a weekly increase in demand,” she said in an email. “Like the rest of the country, demand for the COVID-19 vaccine is slowing.”

Counties have been turning down vaccine doses as demand has waned, and while the department reported that more than 1.95 million shots had been administered as of Wednesday, there still were almost 647,000 more doses available. The health department in Sedgwick County, home to the state's largest city of Wichita, has reduced the operations of its vaccine clinic by 10 hours a week because of falling demand, The Wichita Eagle reported.

Meanwhile, some Republican senators in the GOP-controlled Legislature were working on a proposal to prohibit state and local government agencies from requiring people to have COVID-19 vaccine passports to enter places accessible to the general public.

Kelly said last month that she has no interest in vaccine passports and that none would be issued under her authority.

But Senate Judiciary Committee Chair Kellie Warren, a Leawood Republican, said lawmakers are hearing from people who want to see a ban imposed.

“This would be protecting-your-privacy concerns,” she said.

With the Legislature hoping to wrap up the year's business this week, lawmakers would have to slip a proposed ban into an existing piece of legislation when senators and House members write the final version.

“I think it would impact even getting information from your own doctor, and certainly we don't want that to be the case,” Patton said.

Warren also is working to resurrect limits on tracing contacts in cases where people have been exposed to COVID-19. The Legislature enacted the limits last year at the urging of Attorney General Derek Schmidt, a Republican who is running for governor, who saw them as a way to protect people's privacy.

However, the limits on tracing expired Saturday, and while the Senate approved a bill in March to keep them in place permanently, the House did not take up the measure. The rules prevented people exposed to COVID-19 from being forced to disclose their close contacts and said people couldn't face criminal charges or civil lawsuits for refusing.

Those limits set COVID-19 apart from other infectious diseases, such as syphilis or hepatitis. Public health groups said the limits hinder contact tracing and decried the different rules for the novel coronavirus. Some Republicans said the special treatment was justified because COVID-19 was so widespread and the danger to privacy much greater.

Warren said: “We've been hearing from constituents across the state that these are issues they want the Legislature to take up.”