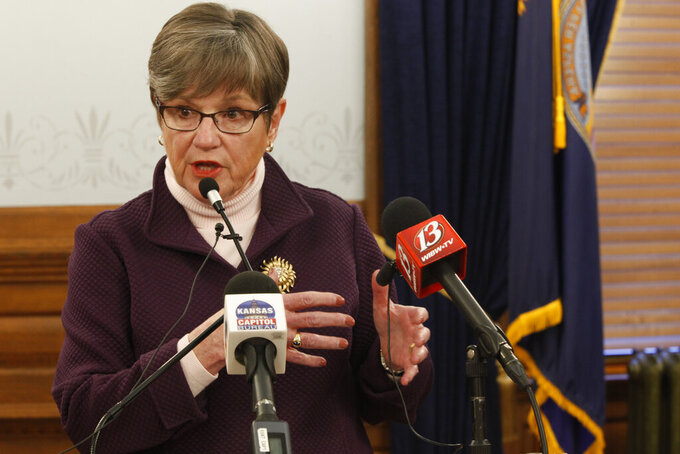 Kansas Gov. Laura Kelly answers questions about the COVID-19 pandemic during a news conference, Wednesday, March 3, 2021, at the Statehouse in Topeka, Kan. The Republican-controlled Legislature is considering changes in the state's emergency laws and limits on the governor's power during pandemics and other emergencies. (AP Photo/John Hanna)

TOPEKA, Kan. (AP) — Kansas plans to give thousands of meatpacking plant workers their first COVID-19 vaccines by the end of next week, Gov. Laura Kelly announced Thursday, as at least a few counties pushed back against state inoculation rules that carry the threat of having doses withheld for not complying.

The vaccinations for meatpacking workers began Thursday afternoon in southwestern Kansas, and Kelly said the state plans to administer the first of two doses to more than 12,000 of them across the state. Three counties in the area — Seward, Ford and Finney — have among the highest per capita number confirmed or probable COVID-19 cases in the state because of outbreaks last spring.

The governor said the state has considered meatpacking plant workers critical to the state's economy from the beginning but now is getting enough vaccine doses to push to get them inoculated.

“This is crucial and the right path to protect those workers and the communities where these plants are located,” Martin Rosas, the president of the United Food and Commercial Workers local union for Kansas, said during a Zoom news conference.

Marshall's fellow Republicans in the GOP-controlled Kansas Legislature have criticized Kelly for weeks over what they view as a slow distribution of COVID-19 vaccines. In a federal Centers for Disease Control and Prevention report Thursday, the state ranked 46th among states for vaccine doses administered per 100,000 residents. Kelly and state Department of Health and Environment officials have blamed such low rankings on reporting issues.

Within the past week, officials in two counties have been at odds with the state health agency over moving into the next phase of inoculations to give shots to people younger than age 65 with chronic medical conditions that put them at risk of serious complications from COVID-19.

Sedgwick County is asking Kelly for latitude to give COVID-19 vaccinations to people under age 65 with serious medical conditions, The Wichita Eagle reported.

The state is in the second phase of its vaccine distribution, covering people 65 and older, workers critical to the economy and people in group living situations, including prison inmates. People under 65 with serious medical conditions are in the third phase.

Sedgwick County’s push came two days after the Riley County Health Department said it had receive an email from the state health department saying that the county was not allowed to move into the third phase until other counties were. Riley County also said the state told it that going ahead “would result in vaccine shipments being halted.”

“We operated in good faith that each county was given the authority to distribute vaccine doses according to the needs of their county,” Riley County Health Officer Julie Gibbs said in a statement.

Kelly said the state is asking counties to “hold off” on moving on to the third phase to ensure that other counties can finish the second. State health department spokesperson Ashley Jones-Wisner said in an email to The Associated Press that counties must get its permission to move to the next phase and withholding vaccine doses is “an enforcement mechanism.”

Kelly said that if the state allows counties to move on as they want, they will be inundated with out-of-county residents seeking shots.

“We're just trying to balance this out and keep the train running as smoothly as we possibly can,” she said.

Meanwhile, GOP legislators bargained Thursday over what power Kansas governors and other officials should have during future public health emergencies.

The state House voted 81-40 in support of a bill that would require the governor to confer with the attorney general and get legislative leaders' approval before issuing executive orders during states of emergency. The measure went to the Senate.

Even before the House vote, lawmakers from both chambers began talks over the final version of a measure to rewrite the state's emergency management laws. Top Republicans argue that those decades-old laws weren't written with long-term emergencies like the coronavirus pandemic in mind but have also been critical of steps Kelly took last spring to check COVID-19, including restricting businesses and closing K-12 school buildings.

The Senate approved its own bill Monday that not only would allow a new legislative committee to block the governor's orders during public health emergencies, but would also limit the power of local officials, particularly appointed county health officers.

This story has been corrected to show that the state ranked 46th in a federal report Thursday on vaccination rates, not 45th.