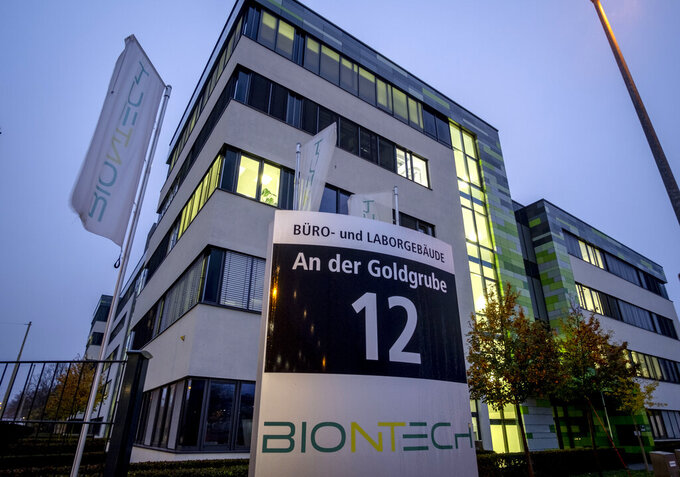 File -- In this Tuesday, Nov.10, 2020 file photo windows are illuminated at the headquarters of the German biotechnology company "BioNTech" in Mainz, Germany. Germany prepares for the vaccination of the German population during the upcoming month. (AP Photo/Michael Probst, file) 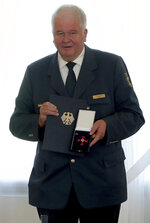 TUTTLINGEN, Germany (AP) — Hulking gray boxes are rolling off the production line at a factory in the southern town of Tuttlingen, ready to be shipped to the front in the next phase of Germany's battle against the coronavirus as it became the latest country to hit the milestone of 1 million confirmed cases Friday.

Man-sized freezers such as those manufactured by family-owned firm Binder GmbH could become a key part of the vast immunization program the German government is preparing to roll out when the first vaccines become available next month.

That's because one of the front-runners, a vaccine made by German company BioNTech together with U.S. pharmaceutical giant Pfizer, needs to be cooled to minus 70 degrees Celsius (minus 94 degrees Fahrenheit) for shipping and storage.

Ensuring such temperatures, colder even than an Antarctic winter, is just one of the many challenges that countries face in trying to get their populations immunized.

The effort has been compared to a military operation. Indeed some countries, including Germany, are relying on military and civilian expertise to ensure the precious doses are safely transported from manufacturing plants to secret storage facilities, before being distributed.

Germany has benefited from the market power that comes with being a member of the European Union. The 27-nation bloc’s executive Commission — led by former German Defense Minister Ursula von der Leyen — has spearheaded negotiations with vaccine makers, ordering more than a billion doses so far.

German officials have said the country hopes to secure up to 300 million doses from the EU orders and bilateral deals with three manufacturers in Germany, including BioNTech and CureVac, a company based in Tuebingen that says its vaccine can be stored at regular refrigerator temperatures for up to three months. Its trials are not as far along, however, as Pfizer/BioNTech and others.

The figure of 300 million is contingent on all vaccines being developed making it to market. That would be more than enough to immunize Germany's population of 83 million, even if two shots are required, as seems likely.

How exactly the vaccine is delivered to patients differs from country to country. In Germany, the federal government has delegated the task to its 16 states, which are now working to build large vaccination centers.

The city-state of Berlin has drafted in Albrecht Broemme, a veteran of disaster management. The former Berlin fire chief later led Germany's federal civil protection organization THW, where he helped organize disaster relief operations for floods, storms and quakes around the world.

The 67-year-old is now coordinating the setting-up of six vaccine hubs in Berlin in a convention center, two former airports, an ice skating rink, a concert hall and an indoor cycle race track.

Authorities want them ready by mid-December to begin vaccinating more than 3,000 people per day at each location. With just a few minutes to deliver each shot and mindful of keeping the number of people in each center at a minimum, Broemme and his colleagues are devising a one-way flow system similar to that found in large stores like furniture company Ikea.

Each site will be run by a medical aid group, such as the Red Cross, with volunteers to help register and guide people through the venue.

Like elsewhere, the first phase of vaccination in Berlin will likely focus on immunizing health care workers and vulnerable groups such as the elderly and those with chronic illnesses.

About 20,000 people in the capital will be vaccinated each day, returning after three weeks for a booster shot.

Demand is likely to outstrip supply at first, but a spokesman for German Chancellor Angela Merkel declined to say whether she would seek priority access for her Cabinet.

“The German government and its members will follow what the relevant experts decide is sensible,” Steffen Seibert told reporters.

Merkel herself told parliament Thursday that she was hopeful regulators will approve the first vaccines “very quickly.”

“That won't solve the problem immediately, but there's a light at the end of the tunnel,” she told lawmakers.

Broemme has said he expects four-fifths of the vaccines initially available to need ultra-low cooling. That means every center will need a pharmacy that handles both the storage and thawing of vaccines.

At the other end of the country in Tuttlingen, Binder GmbH, one of hundreds of medical device manufacturers in the town, some with a history dating back to the 19th century, is seeing demand for its freezers surge.

“It’s plug and play," he told the AP. "All you need is an electrical socket, switch it on and the device is ready to go.”

Having the whole vaccination system ready to go at the touch of a button is a different matter, though.

It is still unclear who will actually administer the vaccines in Berlin. Unlike Britain, which has a centralized National Health Service organizing the immunization drive, Germany is relying on doctors associations to provide the necessary medical staff.

Doerthe Arnold, a spokeswoman for the Berlin branch of Germany's Association of Statutory Health Insurance Physicians, said they are still waiting for the state government to provide details on what will be required of doctors.

“Despite the positive feedback from doctors practices that they're willing to help out even more, providing medical personnel for the six vaccination centers will be a challenge,” she said.

The limits of medical logistics were tested in spring, when huge worldwide demand for ventilators, therapeutic drugs, face masks and other protective equipment prompted bidding wars, bottlenecks and reports of faulty products.

Global logistics company DHL estimates that to provide worldwide coverage of vaccines over the coming two years may require 15,000 flights.

“The challenge is the sheer number of doses and the fact that it’s not clear which vaccine needs to go where,” said Sabine Hartmann, a DHL spokeswoman. “It’s not something a single company can do on its own. All logistics companies have to work together.”