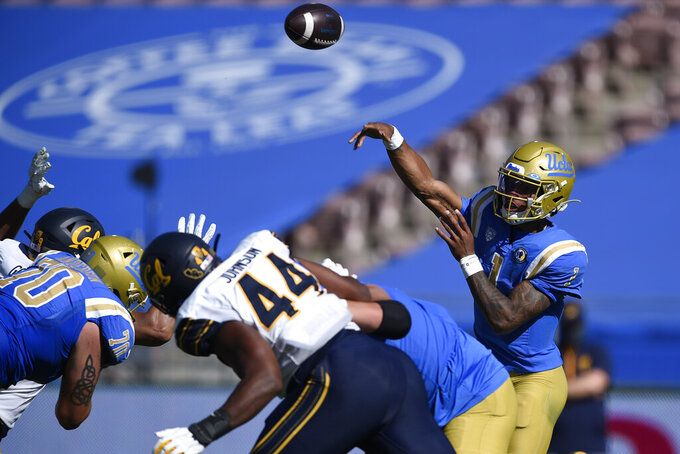 Pac-12 coaches have had to keep game planning simple as schedules shift, sometimes on the fly, during a truncated and uncertain season.

Staffs across the league have had to chuck plans made for opponents that don't materialize and then crammed for their replacements. They've adjusted to not having key players available — sometimes for an extended period — both in practice and for games. That means playbooks are often whittled down.

“You want to pick a couple things your kids are really good at, master those," USC coach Clay Helton said. "I’ve always thought that if you create confusion, you create hesitation, and hesitation in this game is going to get you beat and get you hurt. So we’ve really taken the opposite approach of really shrinking the bible down and picking a couple of things we can get good at per game and letting our kids play fast.”

Nine Pac-12 games have been canceled this season because of COVID-19. It's not just the verified cases: contact tracing protocols mean teams have players that are unavailable even though they haven't tested positive.

As of Wednesday, no new Pac-12 games had been canceled. But Stanford was forced to relocate because of regulations in Santa Clara County, California. The Cardinal will spend nearly the next two weeks on the road, practicing and playing at Washington and at Oregon State.

Once the league secured rapid testing, the original plan was for each team to play a tight schedule of seven conference games in seven straight weeks. But once cancellations occurred and options narrowed, the Pac-12 allowed its teams to look out of conference for opponents.

Which is why Colorado played San Diego State last weekend. The Buffaloes won in Boulder, 20-10.

Again, simplicity was the key.

“Sometimes you’ve got to win ugly and it was one of those games given the lack of preparation,” said new Buffs coach Karl Dorrell.

San Diego State coach Brady Hoke said there was one point last week that the Aztecs thought they might have the opportunity to play Washington, but when that didn't work out athletic director John David Wicker was able to strike the deal with Colorado.

“When we got it, we told the guys on Thursday night about 6 o’clock. We had practiced a couple days, so that we were working into whatever it was. More fundamentals than anything else,” Hoke said. "I thought the coaches did a great job of getting together and putting a plan together.”

This weekend’s game between USC and Washington State was moved from Friday to Sunday because at that point enough players would become available to play after isolating. But they aren’t available for practice during the week.

“We are going to have to be creative ... You’re not going to be able to have enough bodies to have the amount of physical contact you need," Helton said, adding: “It will not be a normal practice week for us.”

Earlier in the season, UCLA and Cal had less than 48 hours to put together a game at the Rose Bowl because the originally scheduled opponents canceled on both teams.

“The biggest thing that they preached is, ‘’We only have 43 hours to prepare so just go out there and play football, man,'" Bruins quarterback Dorian Thompson-Robinson said. “I think that’s the biggest thing that we did was treat this like backyard football back in youth days and we can wake up early and just go play ball.”

Utah coach Kyle Whittingham, whose Utes lost to Washington in another hastily arranged game last weekend, said coaches are typically creatures of habit. Weeks during the regular season are usually highly structured, but not this year.

That's requiring everyone to stay nimble.

“It’s a mental challenge especially for coaches, when you’re so regimented, you have your routine and your process and the way your schedule's in flux all the time, it's challenging. But the whole country’s going through it so it’s not unique to us obviously,” Whittingham said. "Coaches are built a certain way and that way is not to just continually change day to day or even hour to hour. But you have to. You have no choice because that's the situation we’re in. So you've got to figure it out and figure out the best way to make the best of a bad situation.”