Kemp: Use Labor Day caution after prior holiday virus spikes 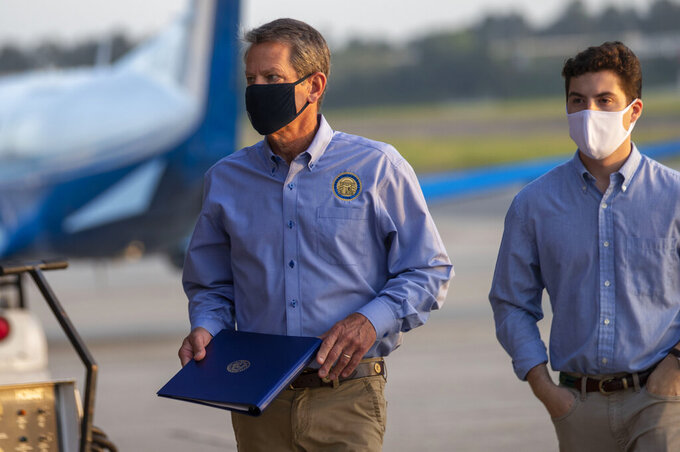 Gov. Brian Kemp, left, is briefed by his press aid Tate Mitchell, right, before speaking at a press conference in a hanger at the DeKalb-Peachtree Airport in Atlanta, Friday, Sept. 4, 2020. Kemp and first lady Marty Kemp will take part in a fly-around tour of Georgia. (Alyssa Pointer/Atlanta Journal-Constitution via AP)

The Republican governor touted progress against COVID-19 during stops in Atlanta, Valdosta, Savannah and Augusta, saying hospitalizations are down and a smaller percentage of coronavirus tests are coming back positive.

But he also warned that a return to the sort of carefree behavior Georgia saw during Memorial Day and Fourth of July celebrations — when many congregated at backyard barbecues, lakes and beaches and ignored social distancing guidelines — could erase those gains.

“When you look at the charts, it’s abundantly clear that cases have spiked and hospitalizations have risen and deaths have increased after our holiday weekends,” Kemp told reporters at a private terminal where his plane landed in Savannah. "People forget that we are battling an invisible enemy and unfortunately many let their guard down.”

He said people going shopping or heading to parks and beaches should be mindful to avoid crowds, wear masks when social distancing isn't possible, wash their hands and follow other guidance from public health officials.

As of Friday, Georgia had more than 277,000 confirmed coronavirus infections and more than 5,800 deaths. Infections and deaths have more than doubled statewide since Kemp traveled Georgia asking people to take similar safeguards before the Fourth of July.

Kemp said he still he opposes a statewide mandate that people wear masks in public — a step taken by 34 other states. Instead, he's encouraging people to wear them voluntarily.

"We’re asking Georgians, and I trust them to do the right thing,” Kemp said.

Standing behind the governor was Savannah Mayor Van Johnson, who has been one of Kemp's most outspoken critics on masks.

Savannah was the first city in Georgia to require wearing masks. When Kemp issued an executive order July 15 voiding mask mandates enacted by at least 15 Georgia cities and counties, Johnson tweeted: “Governor Kemp does not give a damn about us.”

Kemp later revised his order to say local governments could require masks but could not impose them on private businesses without their consent.

Both Kemp and Johnson downplayed the feud Friday, saying they have policy differences but agree that people should take the virus seriously and protect themselves and others.

“I don’t think, during the middle of a pandemic, now is the time to point fingers at people," Kemp said when a reporter asked if infections would have been lower if state officials had shown support earlier for local mask mandates.

Johnson even gave Kemp a gift — a face mask with Savannah's logo printed on it.

Speaking to reporters after the governor departed, the mayor noted that Kemp had praised Savannah for reductions in infection rates and hospitalizations.

“You can draw that directly to the fact that Savannah had a mask ordinance before anyone else in the state,” Johnson said.