Kendall Hinton's QB moment marked in Canton, across the NFL 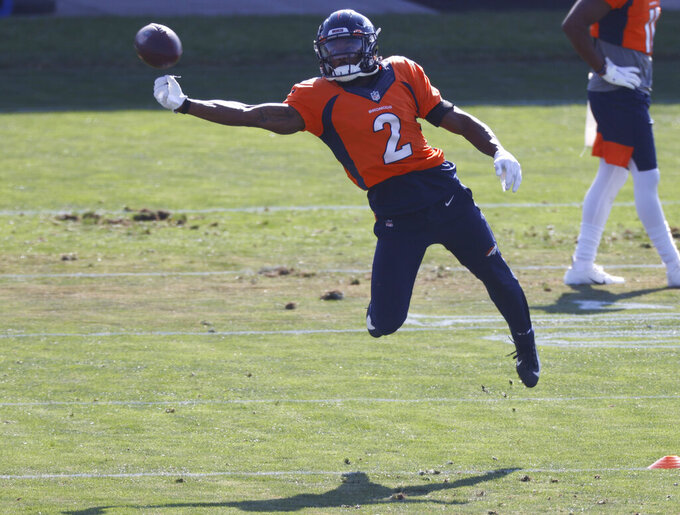 DENVER (AP) — Wide receiver Kendall Hinton’s start at quarterback for Denver may have been forgettable, but it's memorialized in the Pro Football Hall of Fame and on practice fields across the NFL.

A half dozen teams sport a quarantined quarterback this month after the Broncos were forced to play the Saints on Nov. 29 without any of their four QBs.

The Broncos’ QB quandary began when No. 3 passer Jeff Driskel tested positive for the coronavirus on Thanksgiving Day. Two days later, the NFL disqualified starter Drew Lock, backup Brett Rypien and practice squad veteran Blake Bortles because all four had failed to wear their masks around each other earlier that week.

Hinton, who played quarterback at Wake Forest before switching to wide receiver, was activated from the practice squad and became the first non-QB to start at the position since running back Tom Matte did so for the Baltimore Colts in 1965.

Hinton completed just 1 of 9 passes for 13 yards with two interceptions in Denver’s 31-3 loss, but he earned accolades far and wide, including from Matte, who wrote Hinton a heartfelt letter.

“Fifty-five years ago, I was in your shoes,” Matte wrote. “I was the Baltimore Colts’ ‘instant quarterback’ and believe me, it was an experience I’ll never forget! Late in the 1965 season, our quarterbacks — John Unitas and Gary Cuozzo — were injured. My usual position with the Colts was halfback but, having played quarterback in college, I was technically the team’s third-string QB. So when Unitas and Cuozzo went down, my initial reaction was simply, ‘Oh, my god. Don’t tell me I have to play quarterback.‘”

Matte felt a kinship with Hinton.

“As the only two ‘Instant Quarterbacks’ in NFL history, we have a strong connection, thanks to our shared experience,” Matte wrote. “I’m proud of how you stepped up for your teammates, particularly in what was an impossible situation in difficult circumstances. Decades from now, I hope you’ll look back with pride on your experience — you’ll have quite a story to tell your grandchildren!”

Hinton’s play-calling wristband was sent to the Hall of Fame this month and is on display in Canton along with Matte’s wristband from 1965.

Hinton went back to being a practice squad receiver when the Broncos’ three sequestered quarterbacks came off the COVID-19 reserve list. For a while, the team kept Bortles away from Lock and Rypien at practice as a precaution, but all four are now back at practice together.

The league’s other 31 teams all reviewed their own QB situations after the debacle in Denver, and six teams have an emergency quarterback isolated from the rest of their teammates heading into the final two weeks of the season.

The league has made a couple of decisions that make a repeat of Denver’s quarterback quandary unlikely.

They enhanced COVID-19 protocols, mandating all team meetings be conducted virtually the rest of the season, and they tweaked a rule that now allows teams to grab a QB off another team’s practice squad and immediately add them to the roster rather than having to wait out a weeks’ worth of negative coronavirus tests.

“We are all separated. We’re doing all of the meetings at home. We’re spread out at practice," Gailey said. "Meetings from home are kind of handling the separation there.”

“I know people think you should just quarantine a quarterback and just have him sitting there in a room, just on ice, ready to come out when time’s needed. If it gets to that point, I feel bad for that guy, too,” Shanahan said.

“You can’t just go into an NFL game after being locked in a room for weeks until you’re needed and think you’re going to go out there and perform much better than a practice squad receiver would at quarterback. That sounds nice, but if it gets to that point, no answer is very good. So, you just deal with it.”

Some teams like the Patriots and Rams have players on their rosters who were quarterbacks in college who would serve as their team's emergency QB.

Rams coach Sean McVay noted that he has several ex-quarterbacks on his roster, including 300-pound O-lineman David Edwards, wide receiver Cooper Kupp and punter Johnny Kekker, a high school passer who has shown off his arm on fake punts and kicks.

“We’ve got a lot of guys that I think would probably say they should be first in line,” McVay said.

The Titans kept their third QB, Trevor Siemian, away from the team after their own COVID-19 outbreak in September into October. After the Saints signed Siemian when Drew Brees got hurt, the Titans added Kizer to their practice squad and isolated him.

“Obviously, if we didn’t do anything at all, we’d be safe, but I don’t think you can really practice and play very well doing it that way,” Belichick said. “So, at some point, you’ve got to meet, prepare and play.

“I’m sure if we all just sat around in a bubble, then maybe nobody would get anything, but I can’t imagine we’d be a very good football team.”