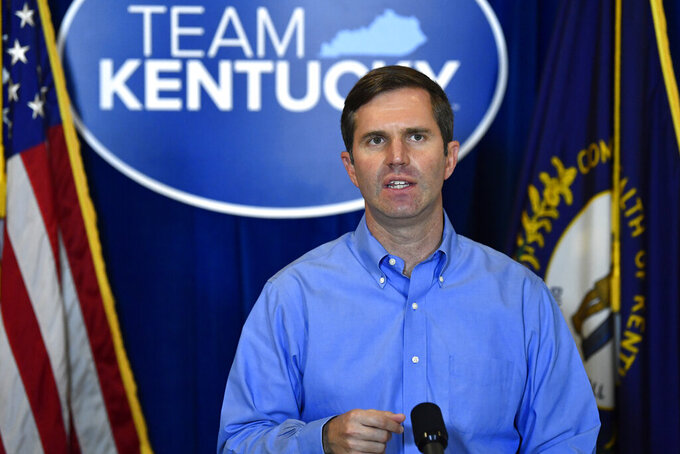 Beshear's plan is likely to face headwinds with Republicans fully controlling the legislature, but it lays out his view of the state's urgent needs. In urging bipartisan cooperation, the governor said: “Every moment in this short session we spend fighting is a loss for our Kentucky families."

“The shock of COVID-19 has brought on our current transformational period, and how we lead in the next year will dictate whether Kentucky simply recovers back to the old normal or, instead, takes its place among the most productive and innovative states in the union," he said.

Republican lawmakers, with veto-proof majorities, will reshape the budget to their liking.

“I think that you will see us take a very, very conservative approach," Osborne said on Kentucky Educational Television. “And we’ll still have a very lean budget going forward.”

With COVID-19 still raging early in the vaccine rollout, Beshear urged the GOP-led legislature to quickly pass a separate virus relief bill. It includes $220 million in aid for small businesses, $20 million for non-profit organizations and $100.9 million to help repay a federal loan that kept the state's unemployment insurance program afloat.

“This represents the single largest relief fund of its kind in generations, and it cannot wait," the governor said, his speech delivered virtually because of the pandemic.

In a separate response to the pandemic hardships, Beshear said he will allocate $48 million of federal virus aid to help some of Kentucky's unemployed workers. Each eligible person will receive $1,000. The aid will go to jobless Kentuckians who have waited more than two months for benefits. It also applies to people who missed out on supplemental jobless benefits last year.

With the state seemingly on better-than-expected financial ground, thanks partly to federal relief and improved state tax collections, Beshear urged bold action by lawmakers to get Kentucky through the pandemic and position it for the post-pandemic world.

“We have not had this much opportunity for new investment in our people and in our future in a generation," he said. “Let’s make it count. Let’s have the courage. Let’s be bold."

His proposed investments include one-time spending of $100 million for school renovations and construction and $50 million to expand broadband access.

The governor's main budget plan for the fiscal year starting July 1 was built on no tax increases and doesn’t rely on passage of any new revenue measures. His proposed budget contains no General Fund spending cuts.

The spending blueprint reaffirms his priorities before the pandemic put them on hold in 2020.

He called for a 1% increase in the state’s school funding formula, known as SEEK, for public K-12 schools. Base per-pupil funding would rise by $40 to $4,040.

For public universities, which absorbed repeated cuts this past decade, the governor called for a 2% budget increase from the General Fund.

His budget allocates $47.5 million to fix “a legacy of underfunding" the unemployment insurance system, which was inundated by record numbers of claims amid the pandemic, Beshear said. It resulted in long delays for many people seeking jobless assistance.

Beshear’s plan fully funds the state’s Medicaid program, including the Medicaid expansion started when his father, Steve Beshear, was governor. The expansion added hundreds of thousands of Kentuckians to the Medicaid rolls.

Local health departments on the front lines in fighting the pandemic would share in an additional $12 million in General Fund support under his plan.

Beshear proposed a 1% pay raise for state employees. And he committed to paying the full contribution required on public employees’ pensions. He also proposed $72 million in pension relief for regional universities and quasi-governmental agencies — such as local health departments and community mental health centers.

His plan would put another $100 million in the state's Rainy Day fund.

Kentucky's budget situation was bolstered by the massive influx of federal coronavirus aid and the increased federal share of Medicaid spending. It also reflects the Kentucky economy's resilience with stronger tax collections in recent months.