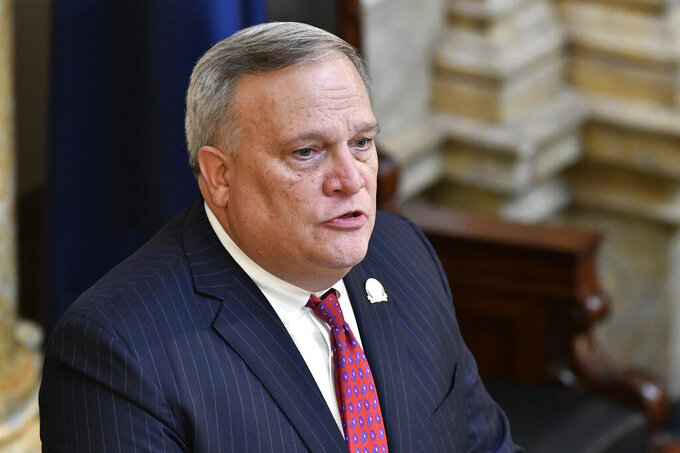 Kentucky Senate President Robert Stivers addresses the members of the Senate during the last day of the Legislature at the Kentucky State Capitol in Frankfort, Ky., Tuesday, March 30, 2021. (AP Photo/Timothy D. Easley)

Another spending measure that cleared the Republican-dominated legislature would allocate hundreds of millions in federal pandemic relief money for water and wastewater projects.

It capped a remarkable one-day spending spree that topped $1 billion as lawmakers dipped into federal and state funds for a bevy of projects that included shared priorities between Democratic Gov. Andy Beshear and Republican lawmakers. The last spending measure won final passage in the final hour before the midnight deadline for the session to end.

Rep. Joni Jenkins, the top-ranking House Democrat, referred to the last-day spending as “breathtaking,” coming after “months and months of hearing about an austere budget.”

“I do think it's a great time for us to invest in our commonwealth,” she said.

State government in Kentucky is expected to eventually receive about $2.4 billion from the pandemic aid package championed by President Joe Biden and passed by the congressional Democrats, including the state's lone Democratic congressman, John Yarmuth.

One proposal winning final legislative passage contained $140 million in state funds to support full-day kindergarten. The measure cleared the state Senate on a 36-1 vote soon after it surfaced in a committee. The House later voted 90-3 to send the measure to the governor.

That spending plan included Beshear's proposal to use $575 million in federal pandemic aid to repay a federal loan that kept the state’s unemployment insurance program afloat. The program faced an unprecedented surge in jobless claims last year due to COVID-19.

The Senate gave final approval Tuesday night to another bill that would allocate $250 million in federal pandemic aid for a water and wastewater grant program in Kentucky. Beshear also advocated using some of the federal money for such infrastructure work.

Another proposal, also tapping into federal money, included $127 million for school construction and renovations and more than $50 million for interior renovations at the state Capitol. The measure won final passage late Tuesday.

Beshear and legislative leaders spent weeks trying to hash out a plan to spend at least part of the federal aid before the session ends.