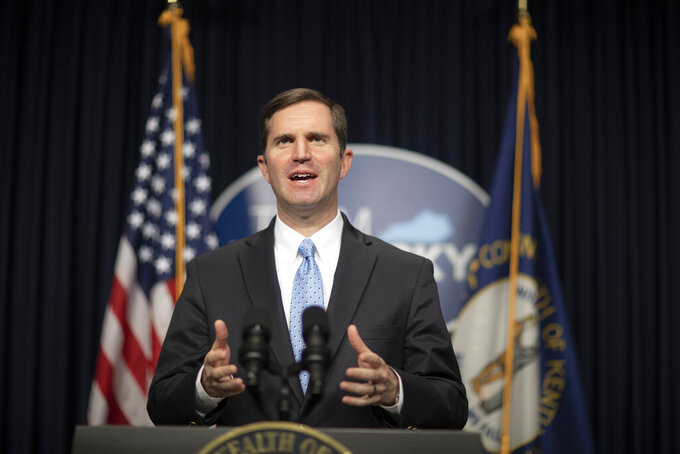 Abortion opponents approved a proposal seeking to amend Kentucky's constitution to ensure it doesn’t offer protections for abortion rights. The measure will go on the 2022 statewide ballot.

Another measure winning final passage in the Republican-dominated legislature's closing frenzy would limit public access to some records of judges, police and prosecutors. A media organization said it would urge Democratic Gov. Andy Beshear to veto the bill. Lawmakers would not have a chance to overturn a veto of that bill or other measures passed in the final two days of the session. The governor does not have the authority to veto proposed constitutional amendments.

Beshear’s office said the governor and his team would review the final version of each bill that comes to them and decide what’s in the best interest of Kentuckians.

Lawmakers ended the contentious 30-day session shortly before midnight. The session was overshadowed by a flurry of GOP-backed bills to water down the governor's executive powers.

As the clock wound down on the 2021 session, lawmakers spent a long day putting finishing touches on some high-profile measures that had lingered for many weeks. They sent to Beshear a bill imposing a partial ban on no-knock warrants, more than a year after the death of Breonna Taylor during a police raid on the Black woman’s home in Louisville.

The measure would only allow no-knock warrants to be issued if there was “clear and convincing evidence” that the “crime alleged is a crime that would qualify a person, if convicted, as a violent offender.” Warrants also would have to be executed between 6 a.m. and 10 p.m.

After spending weeks in limbo, that legislation resurfaced to clear the House on a 70-27 vote. The Senate later voted 24-14 to send the bill to Beshear.

The COVID-related bill aims to offer liability protections for businesses looking to recover from the pandemic without creating blanket immunity from civil liability, Republican Rep. C. Ed Massey said. Those protections wouldn't apply if businesses engaged in practices deemed as grossly negligent or as willful or intentional misconduct, he said.

“We have really tried to thread the needle ... to give an adequate amount of protection while not giving them blanket immunity,” Massey said.

The bill's critics portrayed the liability shield as an overreach interfering with constitutional protections on access to the courts.

“I trust our juries and I trust our judges to weed out frivolous claims and to protect those who need protecting,” said Democratic Rep. Angie Hatton said.

The Senate gave final passage to the proposed abortion-related constitutional amendment that will go on next year's ballot. The proposal, if approved by voters, would amend Kentucky’s constitution to declare that it provides no right to abortion.

Meanwhile, a bill that would limit access to some open records of judges, police and prosecutors won final passage from the Senate. The House had amended the bill to include family members and prevent access to information such as property tax records, vehicle registration or home addresses.

David Thompson, executive director of the Kentucky Press Association, said “we have no choice now but to petition Governor Beshear to veto the legislation and we hope that is the result.”