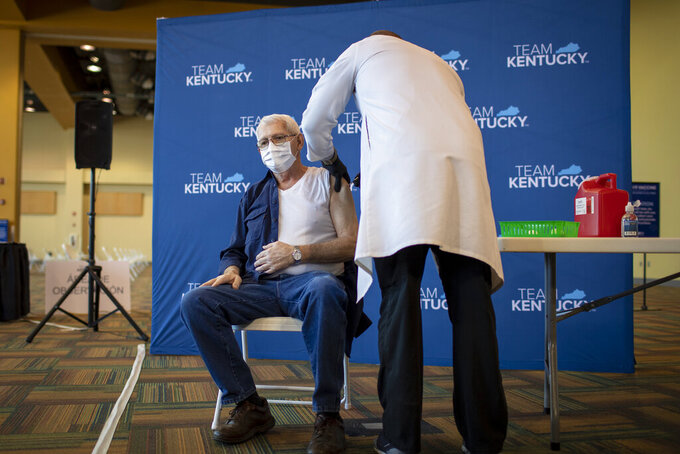 Veteran, Paul French, 74, receives the first COVID-19 vaccine dose at the new high-volume regional vaccination center at the Horse Park in Lexington, Ky., Tuesday, Feb. 2, 2021. The state says about 600 Kentuckians are to receive their first doses Tuesday at the site operated in partnership with Kroger Health. The high-volume site is expected to vaccinate more than 3,000 people weekly. (Silas Walker/Lexington Herald-Leader via AP)

LEXINGTON, Ky. (AP) — Kentucky's regional vaccination centers like the one that opened Tuesday at the Kentucky Horse Park will mark a "turning point” in the fight against the coronavirus, Gov. Andy Beshear said.

Until vaccine supplies increase considerably, the state will rely on regional sites to meet the logistical challenges of getting limited doses into arms, the governor said. The network eventually will spread to health departments and pharmacies when more vaccine becomes available, he said.

The federal COVID-19 team will increase Kentucky's vaccine supply by an additional 5%, giving the state a total increase of 22% for the week of Feb. 8 compared with the week of Jan. 25, Beshear said later.

The eventual goal as vaccine shipments ramp up is to make sure that no Kentuckian has to drive more than one county away to get the shot, said Jim Gray, who oversees the vaccine distribution project. That will require a big expansion of the vaccination network in a state with broad stretches of rural territory.

Until then, regional centers will play the primary role in getting Kentuckians inoculated, Beshear said. About 600 people were to receive first doses Tuesday at the horse park site operated in partnership with Kroger Health, the state said. The high-volume site is expected to vaccinate about 3,000 people weekly. Kentuckians 70 and older are getting the highest priority for vaccinations.

“When we look back on this battle years from now, today will be one of the days that marks a real turning point in when we began to win this war against COVID-19,” the governor said.

Paul French, a 74-year-old veteran from Lincoln County, received the first vaccination at the regional center on the outskirts of Lexington.

Last week, the state announced other regional sites opening in partnership with hospitals in Paducah and Danville. More locations will be announced in coming days and weeks.

“We have to continue to grow our capacity so when we have those additional vaccines, when the manufacturing picks up, when we have a flood of these life-saving shots of hope, that we are ready to ... get them in people’s arms as quickly as humanly possible,” Beshear said.

More than 422,000 COVID-19 vaccine doses have been sent to Kentucky, with more than 362,000 already administered, Beshear said Monday. The state is approaching its goal of getting at least 90% of its supply into people’s arms within seven days of its arrival, he said.

The Democratic governor has expressed frustration with the volume of vaccine deliveries.

Demand is outpacing supplies so much so that the Danville hospital was inundated with tens of thousands of calls for its first few hundred appointments, Beshear said Tuesday.

About 1,500 health care providers in Kentucky want to give the shots, the governor said. But based on available vaccine, each provider would currently get just 36 doses, he said.

“Could you imagine somebody fighting to be one of those 36 calling 1,500 numbers?" Beshear said. "So the logistics challenge right now, and until we have massive supply, is best met through regional centers, but then more targeted operations.”

The state faces mounting distribution challenges when the focus turns to the next group on the priority list. That category exceeds one million people and includes people 60 and older, anyone older than 16 with high-risk medical conditions and anyone deemed an essential worker.

Meanwhile, another goal is to expand scheduling so more Kentuckians have the peace of mind of knowing when they will be vaccinated, the governor said.

“I hear people say, ‘I just want to know when it’s coming’ and not have to get on every morning to sign up," he said. "So we are working on that.”

“Remember, we’re still in a very early stage of this," Gray said Tuesday at the horse park. "So patience. Your turn will come. When the supply increases, we are ready.”

In an encouraging sign, coronavirus cases statewide have fallen for three straight weeks for just the second time since the pandemic began, Beshear said.

Another 2,443 cases were reported Tuesday along with 32 deaths, Beshear said. But the positivity rate was 8.83%, the fifth day in a row that the rate in Kentucky was below 9%.