Kenyans fear they're on their own as COVID-19 surges again 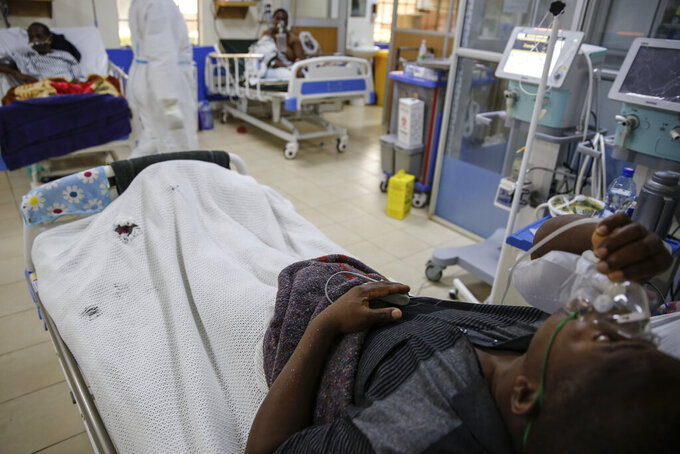 A coronavirus patient lies in the intensive care unit of an isolation and treatment center for those with COVID-19 in Machakos, south of the capital Nairobi, in Kenya Tuesday, Nov. 3, 2020. As Africa is poised to surpass 2 million confirmed coronavirus cases it is Kenya's turn to worry the continent with a second surge in infections well under way. (AP Photo/Brian Inganga)

NAIROBI, Kenya (AP) — A Kenyan doctor died of COVID-19 over the weekend after no bed for him in an intensive care unit was available. Other doctors say they cannot afford the treatment they administer to COVID-19 patients, yet many work while dangerously exposed without protection. Some health care workers organize fund drives for colleagues to pay medical bills.

As Africa is poised to surpass 2 million confirmed virus cases as early as Wednesday, it is Kenya's turn to worry the continent with a second surge in infections well under way.

The death of four doctors from COVID-19 over the weekend, due to neglect and hospital congestion, has sparked anger and pushed the medical fraternity to the edge. The Kenya Medical Practitioners, Pharmacists and Dentists Union is calling for a strike starting next month for its 7,200 members, who represent the majority of the country's doctors.

“Our lives as doctors will not be sacrificed in this manner. Doctors will not engage in suicide missions in the war against COVID-19,” the union's secretary general, Chibanzi Mwachonda, told a briefing on Sunday.

For many Kenyans, the strike notice is the latest warning that they are largely on their own in this pandemic.

Kenyans watched last week as President Uhuru Kenyatta inaugurated a new hospital with COVID-19 facilities for United Nations staffers and “the entire diplomatic community.” And yet some Kenyans have complained of being turned away for care at public hospitals.

The country has over 70,000 confirmed cases, far less than some other nations, but it has seen a 34% rise in new cases over the past four weeks.

“This has been a very bad week for us,” health minister Mutahi Kagwe said Sunday, a day after the four doctors died.

And yet last week, Kagwe said the government's health insurer will not assist Kenyans in paying for their admission and treatment and treatment for COVID-19. And he told lawmakers investigating claims that private insurance companies weren't covering the cost of COVID-19 treatment that such coverage wasn't feasible.

″We are on auto-pilot. We are on our own. The government is not interested in containing COVID-19. Their key interest is changing the constitution through a referendum to entrench power," said political activist Boniface Mwangi. He was referring to an upcoming referendum for which the government has set aside millions of dollars that many believe it doesn't have.

The right to health is guaranteed by the constitution “only on paper and not in deeds," he said, pointing out fundraising drives on social media so that doctors in county hospitals can buy personal protective equipment.

Political rallies to popularize the referendum and campaign for the 2022 election, meanwhile, have been “super spreader events” that further burden the overstretched and neglected healthcare system, KMPDU chairman Samuel Oroko told Sunday's briefing.

Ten doctors and 20 other health care workers have died of COVID-19 so far, he said, and their colleagues had raised some $20 million for their bills in intensive care.

The government must provide adequate PPE for all healthcare facilities, insurance coverage for all doctors, dedicated care facilities for health workers and more, he said. And he vowed that doctors will ignore any court order barring the strike.

“Kenyans have been on their own. The government has relied on coercion rather than consent in managing the disease and has shown little understanding of how ordinary Kenyans are affected by its dictates," said cartoonist and political commentator Patrick Gathara.

He said people are being arrested and fined $200 for not wearing a mask, yet many Kenyans cannot afford them. “Further, putting people in crowded police cells is completely bonkers!” he said.

“For it to be better, government has to do something that it has been loathe to do since independence: see Kenyans as citizens rather than subjects, work with them rather than brutalize them, explain rather than dictate,” Gathara said.

In Kibera, the country’s largest informal settlement, residents hardly wear masks like those in more well-off neighboring suburbs of Nairobi.

Over the weekend. Sam Ochieng, an aspiring politician, sat with nearly 100 other men without masks as they bantered for hours about life and the state of the nation.

Ochieng says most people in Kibera believe that government officials are exaggerating the pandemic to siphon money from public coffers.

It's hard for people to believe in COVID-19 when they don’t see widespread deaths, he said.

"They say they are testing people from Kibera but nobody has seen them do so, and it's very hard to hide such things in a tight-knit community, so it becomes difficult for residents to believe anything that the government says,” Ochieng said.

Such attitudes are a major challenge for Africa as virus infections creep up again in Kenya and elsewhere, the continent's top public health official says.

“We have begin to see what I call prevention fatigue,” the director of the Africa Centers for Disease Control and Prevention, John Nkengasong, told an online event on Monday. “Some countries have just literally abandoned masks.”

That's dangerous, he said, and “we don’t know how high the second peak will come.”