Kerevi preparing to play 7s for Australia at Tokyo Olympics 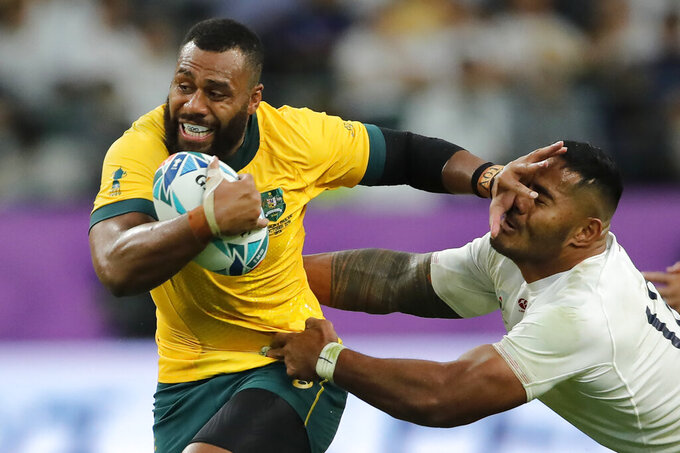 FILE - In this Oct. 19, 2019 file photo, Australia's Samu Kerevi fends off an England's Manu Tuilagi during the Rugby World Cup quarterfinal match at Oita Stadium in Oita, Japan. Kerevi has been named in the Australian 7's squad for the Tokyo Olympics. (AP Photo/Christophe Ena,File) 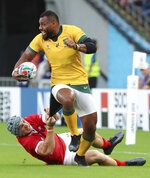 BRISBANE, Australia (AP) — Ex-Wallabies center Samu Kerevi has returned from Japan to have a shot at making Australia’s rugby sevens team for the Tokyo Olympics.

The 27-year-old midfielder has been included in Australia’s team to play against Olympic champion Fiji, New Zealand and an Oceania Barbarians team in the June 25-27 Oceania Championship in Townsville, northern Queensland state.

Head coach Tim Walsh announced his squad Thursday, including a first selection for Kerevi as well the return of Lewis Holland, Lachlan Anderson and Tim Anstee from their Super Rugby commitments.

After playing 33 tests and being a regular starter for Australia in the 2019 Rugby World Cup in Japan, Kerevi hasn't been available for Wallabies' selection because he's based overseas and playing for Suntory in Japan's Top League.

Kerevi hasn't played for Australia in the sevens format at all, but Walsh has suggested the ball-running, heavy-tackling midfielder can be well used as an impact player.

Walsh said Kerevi hadn't been given any guarantees regarding Olympic selection, but had been doing everything possible to put himself in contention since returning to Australia and going through quarantine.

“Just by virtue of having a player of his calibre, it changes the dynamic of the squad a bit so he’s had a big impact,” Walsh said. "Hopefully for us and the team he gets to wear the gold jersey.”

Walsh said the enforced break from competition during the COVID-19 pandemic has bolstered the playing depth.

“Players who wouldn’t have dreamt of being considered for selection are now in the mix and representing the program at an elite level,” Walsh said. "The addition of Samu is a welcome achievement for the program and underpins one of the program’s objectives – retain, recruit and develop the best Australian rugby players."

Even during his two-week hotel quarantine, Kerevi worked out on the treadmill and exercise bike to increase his running fitness to be ready to adapt to the shorter, sharper sevens games.

“It’s definitely a lot more (running) than any 15-a-side game but I want to get fit enough to be able to play," he said. "Whatever minutes I do get, I want to make an impact.”

This will be Fiji’s first tournament in more than a year because of restrictions in place during the COVID-19 pandemic. New Zealand recently hosted a series with the Australian men’s and women’s sevens teams.

It will be the last tournament for all teams to fine-tune for the Tokyo Olympics, where the men's rugby sevens tournament kicks off on July 26 and will be followed by the women's competition.