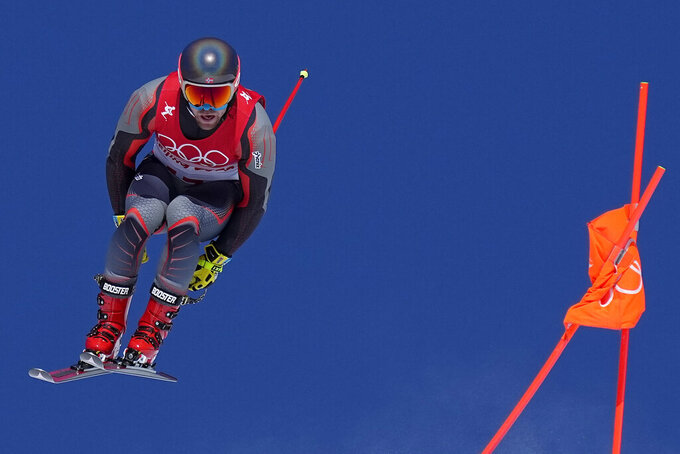 BEIJING (AP) — On their second trip down a previously unknown Olympic hill, the world's top skiers had to deal with strong winds.

Aleksander Aamodt Kilde handled it the best, posting the fastest time Friday in the second men’s downhill training session of the Beijing Games.

The Norwegian, who leads the World Cup downhill standings, had a time of 1 minute, 43.72 seconds through gusts of winds as the skiers tested the Rock course for the second time.

“You could have had a race today, as you saw we skied, but it would have certainly been a lottery in a day like today,” Italian skier Christof Innerhofer said after finishing 0.57 seconds behind Kilde. “There were really strong wind gusts … Then it changed a bit. You need a bit of luck. But I don’t think about that, because just luck won’t be enough.”

Max Franz of Austria was second fastest, 0.06 seconds behind Kilde, and Broderick Thompson of Canada was third, 0.20 behind.

The start of Friday’s session was delayed for an hour because of the wind.

Kilde’s main challengers for the gold medal are expected to be Swiss skiers Beat Feuz and Marco Odermatt, the overall World Cup leader. Feuz was 0.58 slower than Kilde. Odermatt was more than two seconds off the pace.

“I wasn’t fast. Probably I haven’t found the best setup yet but for sure the wind is playing a big role,” Odermatt said. “You can discuss the wind for the next 10 days. It probably won’t be the fairest race.

"It’s sad to have this in the Olympics but it is how it is and you have to ski well for sure, otherwise you can’t win. And if you have the luck on your side and a good run you can win a medal.”

Brodie Seger became the first racer not to finish the course after crashing on a turn. The Canadian spun around and slid down the slope, grazing the safety nets, but avoided serious injury.

“I’m feeling lucky. My thumb is a little bit sore but that’s it. I can ski with that,” Seger said. “It was definitely unnerving when I was heading toward the fence sliding.

"I really didn’t want to hit it and get all tangled up in the B net, because I feel like that could have ended a lot worse ... So I managed to just steer clear.”

All 56 racers successfully made it down the slope during Thursday's opening training session. That was the first time that the world’s best skiers got a chance to see the Rock course up close because test events were canceled over the last two years amid the pandemic.

There will be one more training session on Saturday before the men’s downhill opens the Alpine competition the following day.