Killings of protesters continue in Colombian city of Cali 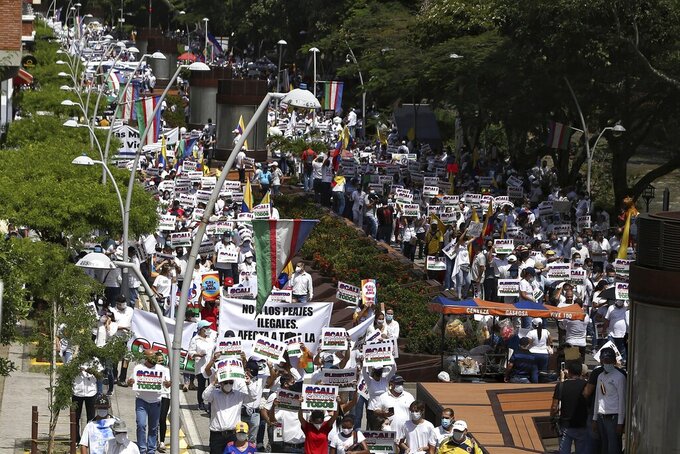 People hold a silent march to support the unblocking of the city's main entrance and exit roads that have been blocked by anti-government protests in Cali, Colombia, Tuesday, May 25, 2021. Colombians have taken to the streets for weeks across the country after the government proposed tax increases on public services, fuel, wages, and pensions. (AP Photo/Andres Gonzalez)

BOGOTA, Colombia (AP) — Two protesters were killed early Tuesday in the Colombian city of Cali as they guarded one of several roadblocks set up by demonstrators to show their discontent with growing poverty and inequality during the pandemic.

The deaths come as Colombia’s federal government sends hundreds of troops to restore order in the southwestern city, where clashes between protesters and civilians who oppose antigovernment demonstrations and roadblocks resulted in at least five deaths last week.

Municipal officials in Cali said the two men murdered early Tuesday morning were shot at by a gunman who fled on a motorcycle and still haven’t been captured. Meanwhile officials are meeting with youth who have been staging roadblocks around the city for the past month.

“We reject painful actions like these which come as we are about to start negotiations,” said Danis Renteria, the city’s secretary for peace and tolerance. “We will continue working for dialogue, peace and reconciliation in Cali.”

Cali’s mayor last week said that 13 people were killed on Friday amid protests that included the looting of an office building, and clashes in which civilians with firearms shot at protestors who were trying to take over a police station in a wealthy neighborhood.

Videos published on social media showed police officers standing by the shooters doing nothing to stop them from firing at crowds.

The situation prompted President Iván Duque to visit the city of 2 million, and send 1,100 troops over the weekend to restore order and guard roads leading into Cali that have been blocked by protesters recently.

On Sunday, the United Nations High Commissioner for Human Rights, Michelle Bachelet, called for those who committed crimes on Friday to be held accountable.

“These events are all the more concerning given the progress that had been made to resolve, through dialogue, the social unrest that erupted a month ago following the start of a nationwide strike against several social and economic policies,” Bachelet said.

According to Colombia’s Human Rights Ombudsman, at least 42 people have been killed in the protests which started on April 28 over a tax plan the government has since removed.

In Cali, where much of the violence has taken place, protests were marked at first by cases of police abuse, but have also been affected recently by clashes between civilians who favor and oppose the protests.

In the capital of Bogota protest leaders have met with government officials to discuss conditions under which both sides could start to negotiate changes to social and economic policies.

But negotiations have been hampered by discussions over the rights of demonstrators. Protest leaders are asking the government to repeal its decision to send troops to Cali and 12 other cities where protests have been violent. The government meanwhile has asked protest leaders to reject roadblocks and call on their followers to dismantle them, before negotiations can get underway.