Kimbrel looking to bounce back after tough debut with Cubs 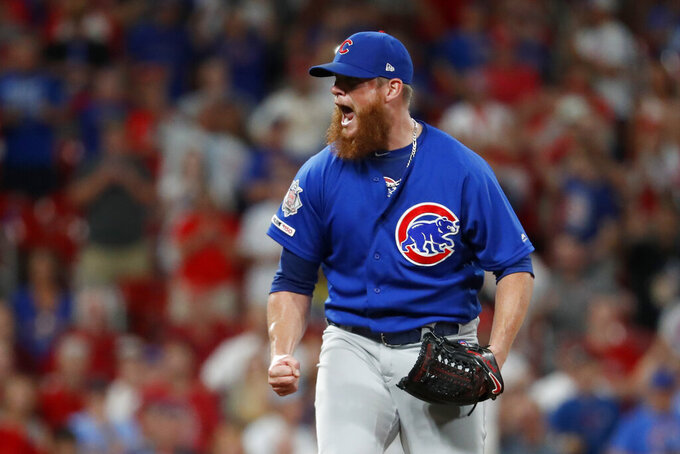 FILE - In this July 31, 2019, file photo, Chicago Cubs relief pitcher Craig Kimbrel celebrates after striking out St. Louis Cardinals' Yairo Munoz for the final out of a baseball game in St. Louis. The 32-year-old Kimbrel is looking to bounce back from one of the worst stretches of his stellar career. The seven-time All-Star closer never looked right after he got a late start last year, going 0-4 with a career-high 6.53 ERA and three blown saves in 16 chances. (AP Photo/Jeff Roberson, File)

CHICAGO (AP) — With just 60 games this season, the Chicago Cubs need Craig Kimbrel to be better than he was last year.

The 32-year-old Kimbrel is looking to bounce back from one of the worst stretches of his stellar career. The seven-time All-Star closer never looked right after he got a late start last year, going 0-4 with a career-high 6.53 ERA and three blown saves in 16 chances.

In his last appearance of the season, he was taken deep by Yadier Molina and Paul DeJong on his first two pitches in the ninth inning of a 9-8 loss to St. Louis that helped push Chicago out of the playoff picture.

If Kimbrel flops again, it won't take much to sink the Cubs' chances in a shortened season amid the coronavirus pandemic.

“You know, in my role, I think turning the page is a big saying, but I think in 60 games it's going to have to be big time,” Kimbrel said Wednesday on a video conference call. “I think each game is going to be a huge game, so I don’t think guys can carry things from game to game as it may happen in a 162-game season.”

Kimbrel was once one of the most dominant relievers in the game. The hard-throwing right-hander averaged a whopping 14.8 strikeouts per nine innings over his first five big league seasons with Atlanta, saving 186 games and compiling a 1.43 ERA.

After struggling in the 2018 playoffs with Boston, Kimbrel became a free agent. The World Series champion Red Sox made him a qualifying offer, which contributed to Kimbrel waiting all the way until last June before finalizing a $43 million, three-year contract with the Cubs.

When he finally got back to the majors, he had a tough time closing out games. He also spent time on the injured list in August with right knee inflammation.

“When those guys are in midseason form and you come in and not have faced a lot of batters, it doesn’t matter how much work you get in the minor leagues, it’s still a different game up here in the big leagues,” manager David Ross said.

“I think last year (he was) just thrown right into the fire and wasn’t quite locked in the way he’s expected to be yet. And you saw the results.”

Kimbrel was looking forward to a full spring training before it was suspended in March because of the pandemic. But he said his delayed start to last year helped him deal with the dead period for baseball.

“Definitely have had some things to lean on and to learn from the year before,” he said. “I understand where I needed to have my body ready to go and feel like I've done a pretty good job of that. Came in a little lighter than I was in spring training.”

Kimbrel has been working on a changeup to pair with his upper-90s fastball for a long time, but he said he has been throwing it more lately. He also has been talking to Cubs staffers about his arm angle and slot.

But the biggest key for Kimbrel could be his command of his off-speed stuff.

“The better I can control those, the better it makes my fastball,” said Kimbrel, who surrendered a homer to Willson Contreras during an intrasquad game Tuesday. “So I would honestly say controlling the curveball in the zone and keeping it down is really, it’s only going to make my fastball play better.”

NOTES: 1B Anthony Rizzo is day to day with lower back tightness, a recurring problem throughout his career. “I just wanted to make sure at this time in the schedule that we use caution,” Ross said. ... INF Hernán Pérez was added to the 60-player pool. Pérez hit .228 with eight homers and 18 RBIs in 91 games with Milwaukee last year. ... Lefty reliever Kyle Ryan is expected to land in Chicago on Thursday. His arrival at summer camp had been delayed because of a protocol issue. He still needs to go through the intake process. ... Oft-injured reliever Brandon Morrow was released from his minor league deal. Morrow hasn't appeared in a major league game since July 15, 2018.