Koepka among those who have to catch up in FedEx Cup 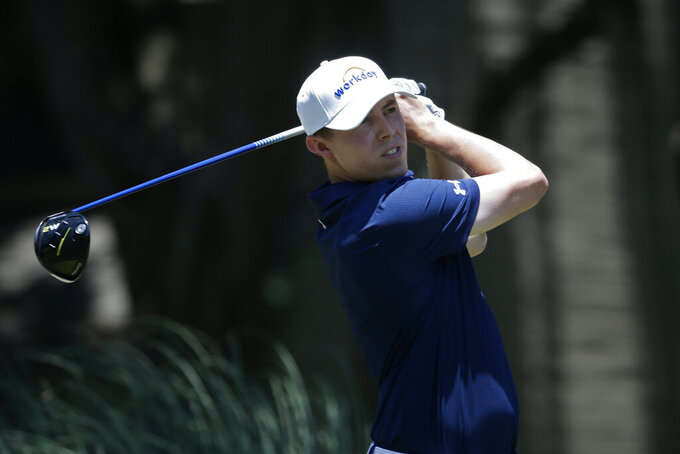 Matthew Fitzpatrick of Britain hits off the second tee during the final round of the RBC Heritage golf tournament, Sunday, June 21, 2020, in Hilton Head Island, S.C. (AP Photo/Gerry Broome)

The question was perplexing to Brooks Koepka, perhaps because it was missing specific context or because it takes a lot to make him worry. He was asked going into the RBC Heritage at Hilton Head if he felt any sense of urgency.

“Urgency for what?” he replied.

Koepka missed three months after a knee injury in October when he slipped on wet concrete at the CJ Cup in South Korea and had to withdraw. When he returned, he played five times — his only top-20 finish was a tie for 17th in Saudi Arabia — and then the COVID-19 pandemic shut down golf for three months.

Having played only four PGA Tour events, he was No. 213 in the FedEx Cup standings.

The only time he didn’t make it to East Lake for the FedEx Cup finale was in 2015, when he missed a month with an ankle injury. He finished 35th. Koepka was unaware that history is working against him this year. In the last 10 years, Jim Furyk is the only player to be outside the top 200 in the FedEx Cup standings with nine events remaining and reach the postseason.

“I just go play golf, just keep doing what I’m doing,” Koepka said that day. “I feel like I’m playing good, so eventually it will come.”

He closed with a 65 at Harbour Town to finish seventh and moved up 56 spots to No. 148. And then he withdrew the following week from the Travelers Championship out of caution when his caddie, Ricky Elliott, tested positive for the coronavirus. He returns to the Workday Charity Open this week having slipped seven spots to No. 155.

Six tournaments are on the schedule between now and the start of the FedEx Cup playoffs. Furyk in 2016 turned it around with a runner-up finish at the U.S. Open. Only one major and one World Golf Championship remain on the schedule.

Koepka has company in that regard. British Open champion Shane Lowry spent most of his time on the European Tour late last year and into the first month of 2020, so he has only seven starts on the PGA Tour and is at No. 148. C.T. Pan, who played in the Presidents Cup, has missed seven of nine cuts since January and is No. 182.

One week can change everything. Dustin Johnson, who missed the entire fall recovering from knee surgery, was off to a slow start before the pandemic and missed the cut at Colonial upon his return. Two weeks later, he won the Travelers Championship and moved up to No. 22.

Koepka still has the World Golf Championship at TPC Southwind, where he won last year, and the PGA Championship, where he tries to become the first player to win three straight times in stroke play. There is time. Plus, he's not one to sweat such matters.

BONES ON THE BAG

Matt Fitzpatrick came over from England for the restart of the PGA Tour, and caddie Billy Foster stayed behind. The idea was for Fitzpatrick to get used to the protocols, and then Foster would join him for the World Golf Championship in Memphis, Tennessee, and the PGA Championship in San Francisco.

Fitzpatrick used Cayce Kerr for three tournaments. And then he got an offer he couldn’t refuse for two weeks at Muirfield Village: Jim “Bones” Mackay, the longtime looper for Phil Mickelson who now does course commentary for NBC Sports.

“I was absolutely shocked,” Fitzpatrick said. “Everyone knows his place in the game and how well he’s done. Even just walking around here, people are excited to see him back and on tour. For me, I was very taken aback.”

It wasn’t an accident. Fitzpatrick has an endorsement with Workday, whose CEO knows Mackay and suggested he reach out to Fitzpatrick. They will be working together the next two weeks at the Workday Charity Open and the Memorial.

The last time was in 1957, when Roberto de Vicenzo won the All American Open against an 83-man field at Tam O’Shanter Club in Illinois. Dick Mayer won the World Championship of Golf on the same course a week later.

That was the 10th straight season that the All American Open and World Championship of Golf were held at Tam O’Shanter in successive weeks. Lloyd Mangrum was the only player to win both events in the same year (1948).

According to the PGA Tour, there was one other tournament held on the same course in back-to-back weeks. That was in 1956, when the Dallas Centennial Open and the Texas International Open were held at Preston Hollow to coincide with the 100-year anniversary of Dallas being founded. Both events were never played again.

Maybe some of the PGA Tour players should borrow the “Drive On” slogan from the LPGA Tour. That’s all they’ve been doing since the restart last month in Texas.

Russell Knox drove his RV from the north Florida coast to Colonial, and then back toward the Atlantic coast to Hilton Head Island, South Carolina. From there, he and his wife went north to Connecticut to the Travelers Championship. At that point, they hired a driver (they were passengers) for the trip to Detroit, and now they’re in Ohio.

But they had company.

One of his closest friends on tour, Brian Stuard, also bought an RV.

“We’ve been traveling along with him,” Stuard said. “Decided to do it and really enjoy it so far. Not sure if we’re going to continue to do that. Those were some long drives. But it’s worth it once you get it there.”

And then there’s Viktor Hovland. The Norwegian played at Oklahoma State and still lives in Stillwater, so he decided to take the four-hour drive to Colonial.

“Then I just kept on thinking, ‘Well, what if I just take my car to all these tournaments?’ I looked it up, it’s 16 hours to Hilton Head. It’s 13 hours to Connecticut. ... Yeah, been having a lot of fun so far.”

He drove through the night from Fort Worth, Texas, to Hilton Head and didn’t feel great when he arrived. He took in some views from Connecticut to Detroit.

“It’s really nice just driving through New York and Pennsylvania,” he said. “It’s really hilly and a lot of cool views on the way.”

Matt Fitzpatrick is hopeful fans will return, especially for the Masters — not so much for him, but his parents. “I know my parents really want to come watch that one,” he said. ... The Senior British Open, canceled this year because of the COVID-19 pandemic, will remain at Sunningdale next year. ... After his victory in Detroit, Bryson DeChambeau was listed as the betting favorite over Rory McIlroy in the three majors this year.

The last three PGA Tour events were won by players from the top 10 in world — Webb Simpson (9) at Hilton Head, Dustin Johnson (6) at Hartford and Bryson DeChambeau (10) at Detroit. The last time that happened was in the summer of 2018 when Johnson (1) won the Canadian Open, Justin Thomas (3) won the Bridgestone Invitational and Brooks Koepka (4) won the PGA Championship.

“I’ll be devastated if I don’t play well.” — Charles Barkley on playing the American Century Championship for celebrities.