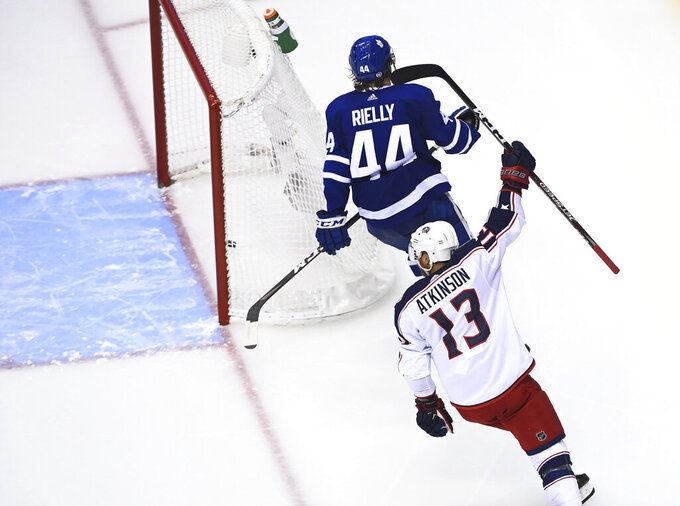 TORONTO (AP) — Joonas Korpisalo stopped 28 shots in his first playoff start, Cam Atkinson scored early in the third period and the Columbus Blue Jackets beat the Toronto Maple Leafs 2-0 on Sunday night in Game 1 of their best-of-five qualifying round series.

Korpisalo, who got the nod over rookie Elvis Merzlikins, whom he battled during the short summer training camp, neutralized one of the NHL’s highest scoring teams. He got a lot of help from a smothering Blue Jackets defense, which blocked 18 shots and did not allow a Toronto shot in the last seven minutes of the game.

“I’m pretty confident from the get-go today, and I think the boys played really good in front of me, battling for me to see the puck," said Korpisalo, who learned on Saturday that was getting start.

His biggest stop may have been a spectacular glove save of a wide-open Auston Matthews shot at the end of the second period.

“Nothing we didn’t expect," defenseman Seth Jones said. “Korpi is a competitor, he’s a hell of a goalie and he made massive saves when we needed them. Most tonight kept us in it. They had some chances when it was 0-0, three or four of them right from the slot.”

After Korpisalo matched Toronto veteran goalie Frederik Andersen through the first two periods, Atkinson’s snap shot from the top of the right circle went under Andersen's right arm 1:05 into the third.

“The initial release looked to be a little bit higher, and I reacted up and obviously I made a mistake and it cost us a goal and eventually the game,” Andersen said.

Columbus coach John Tortorella said it was a timely one for Atkinson, who missed time in February and March with an ankle injury.

“For a goal-scorer that has struggled a little bit as we've gone through, hopefully it will loosen him up a little bit,” Tortorella said.

Alexander Wennberg sealed the win with an empty-netter with 19 seconds remaining.

Andersen had 34 saves for the Maple Leafs.

“As far as I’m concerned, he did his job," Toronto coach Sheldon Keefe said. "We have to find a way to help him.”

The teams opened their series as part of the league’s 24-team relaunch to its pandemic-halted 2019-20 season. The game was played at empty Scotiabank Arena in the NHL’s return following a 142-day absence.

The Leafs are trying to advance past the first round of the playoffs for the first time since 2004. They are coming off consecutive first-round, seven-game playoff losses to the Boston Bruins.

“It’s what we expected," Toronto forward Zach Hyman said. "I think it’s good for us to be playing in these tight games but we want to be on the right side of it. We’ll learn from this. We’re gonna capitalize on our chances and we’re going to come back strong.”

NOTES: Eighteen-year-old Nicholas Robertson made his NHL debut for Toronto. ... Columbus reached the playoffs for a franchise-best fourth straight season....The Blue Jackets won their first playoff series ever when they swept Tampa Bay in the first round last year. ... Columbus played 11 rookies this season, which was tied for the second-most in the NHL after San Jose (12). ... Toronto was second in the NHL with 237 goals in the regular season, but also allowed the seventh-most at 222. ... The Maple Leafs were 1-0-1 against Columbus in the regular season.