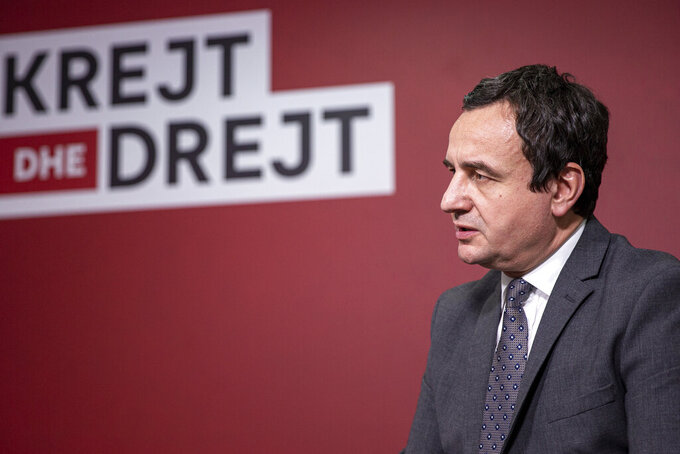 PRISTINA, Kosovo (AP) — The left-wing opposition leader who's poised to become Kosovo's next prime minister said Monday that he would push hard for his country to join the European Union, but also urged the bloc to provide an economic aid package to help smooth the path to membership for western Balkan states.

Albin Kurti's Self-Determination Movement Party, or Vetevendosje!, won a clear victory with 48% of the vote in Sunday's early election held amid the pandemic, an economic downturn and stalled negotiations with wartime foe Serbia. About 99% of the vote had been counted Monday.

Turnout was 47%, or 2.5% higher than the 2019 election, according to the Central Election Commission.

Kurti faces the challenges of reviving the poor nation's economy and reducing unemployment, as well as fighting the pandemic, organized crime and corruption.

He hopes to secure the required 61 votes in the 120-seat parliament to govern alone, or cooperate with the non-Serb minority lawmakers to form his Cabinet. He made it clear there would be no coalition with the PDK and LDK parties.

Kosovo’s Serb minority has 10 seats in parliament and 10 other seats belong to other minorities.

In an interview with the Associated Press on Monday, Kurti urged the European Union to apply what he called a mini-Marshal plan — alluding to the U.S. post-World War II reconstruction plan for Europe — for six western Balkan countries that are hoping to join the 27-nation bloc.

“The Western Balkans Six have EU as the most important partner. But on the other hand, history teaches us that also (the) Balkans (are) very important for Europe,” Kurti said.

Negotiations on normalizing ties with Serbia, which stalled again last year after talks brokered by the U.S. and the EU, did not figure high on the winning party's agenda. Kurti said forming a negotiating team for dialogue would not be a priority.

“To move on further, we need to establish clear principles of dialogue and (an) honest and serious approach by putting the demands of Kosovo and Serbia to each other,” he said.

“Kosovo’s European path also goes through the comprehensive normalization of relations with Serbia,” their statement said.

Kosovo has signed a stabilization agreement with the EU, the first step towards membership.

Kurti said his government would apply for candidate status, and deplored that Brussels has still not allowed visa-free travel for Kosovars seeking to enter the EU.

Kosovo declared independence from Serbia in 2008, a decade after a brutal 1998-1999 war between separatist ethnic Albanian rebels and Serb forces. The war ended after a 78-day NATO air campaign drove Serb troops out and a peacekeeping force moved in.

Within two months of taking their seats, Kosovo’s lawmakers must elect the country’s president. If no candidate is elected after three rounds of voting, the country could be forced to hold another early parliamentary election.