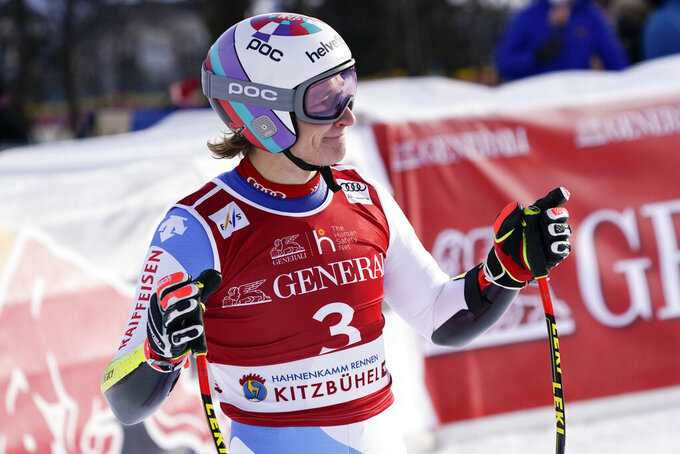 Kriechmayr didn’t have a clean run but he charged all the way down the Streifalm course to edge Marco Odermatt of Switzerland by 0.12 seconds.

Kriechmayr posted the fastest time in the final downhill training on Thursday but failed to replicate the same speed in the races. He finished ninth on Friday and 17th on Sunday in the two downhills, which were both won by Beat Feuz of Switzerland.

“I’m really proud about my race today and about my skiing,” Kriechmayr said. “After the downhill races, this is pretty cool.”

Feuz was more than 2.3 seconds off the lead in Monday’s race when he missed a gate and didn't finish.

With the race rescheduled from Sunday, temperatures were significantly lower than in previous days, making for an icier surface full of bumps. Kriechmayr mastered the difficult conditions for his seventh career victory, but first of the season.

“It was a good run. It wasn’t without mistakes but I was pretty much on the limit,” the Austrian said. “I wanted to come down without compromises. I’d rather go out than finish one or two seconds behind again.”

The result sent him to the top of the discipline standings, overtaking Aleksander Aamodt Kilde and Mauro Caviezel, who are both out with injuries.

Ryan Cochran-Siegle, another super-G winner this season, was also missing. The American sustained a minor neck fracture in a downhill crash on Friday.

Kriechmayr trailed Caviezel by three points in the standings last year when the season was canceled amid the coronavirus pandemic. The Austrian didn't read too much in getting the red bib as the discipline leader.

“Last year, it was my goal, but I missed the globe (by) three points," Kriechmayr said. "Now I just want to ski my way, to be as fast as possible. That’s it."

Austrian teammate Matthias Mayer placed third on Monday, 0.55 off the lead, for his third podium in four days. Christof Innerhofer trailed Mayer by four-hundredths of a second as the Italian finished fourth, just behind the Austrian for a second straight day.

Alexis Pinturault, who sat out the two downhills this weekend, skied into 12th position to strengthen his lead in the overall standings.

Kjetil Jansud, who won the race last year, continued his rough season by failing to finish his run. The Norwegian misjudged a jump and lacked direction to make a gate shortly afterward. Over the weekend, he placed 18th and 26th in the downhills.

Dominik Paris lost hope of another strong result a few seconds into his run. The Italian, who has won four races in Kitzbühel in the past, slid away in a sharp right turn. He avoided falling with his hand in the snow but was slowed and finished more than two seconds off the lead.

Nils Allègre had an awkward crash that sent him through two rows of safety nets, but the Frenchman got up and seemed unhurt. The race was interrupted again when Italian skier Davide Cazzaniga had to be taken off the hill by helicopter with an apparent right knee injury.

The men’s World Cup continues with three slaloms: a night race in Schladming, Austria, on Tuesday and two events in Chamonix, France, this weekend.