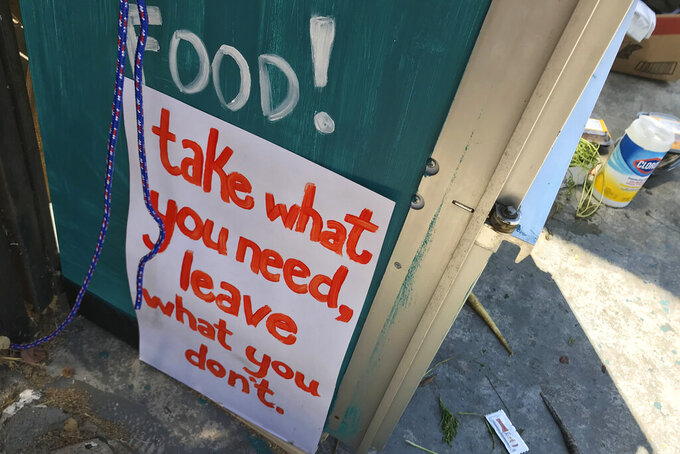 A sign reads "take what you need, leave what you don't." on the side of a refrigerator filled with free food for people in need in Los Angeles on July 20, 2020. A network called, LA Community Fridge, has placed eight of across the Los Angeles area, from the Highland Park neighborhood north of downtown to Exposition Park near the University of Southern California to the seaside city of Long Beach, with plans to install more. (AP Photo/Aron Ranen)

LOS ANGELES (AP) — Money has been tight for Susana Martinez since the coronavirus pandemic hit and her employer slashed her hours.

When the Los Angeles woman heard there was an unlocked refrigerator stocked with food outside a South Los Angeles grocery store, she rushed to have a look.

“I was looking for some vegetables or eggs or milk,” she said after browsing the brightly colored fridge's contents. She found what she needed and soon was on her way, replaced by others who grabbed fresh carrots, bread and juice.

The refrigerator and several others have sprung up around Los Angeles since Marina Vergara learned that In Our Hearts, a New York City-based network of collectives and other groups and individuals, had placed fridges around Brooklyn for people in need.

“I reached out to them and I said this is incredible. I want to do this in LA,” Vergara said. The group connected Vergara with people in LA who were starting a similar network, she said.

“It started with maybe 30 people just chatting online and within two days I put our first fridge up,” she said.

That was on July 6. Three weeks later, her network, LA Community Fridge, has placed eight fridges across Los Angeles, from Highland Park to Exposition Park near the University of Southern California to the seaside city of Long Beach. There are plans to install more.

Community Fridge has sought volunteers who want a free fridge in their neighborhood along with those with extra food that may know a restaurateur with leftovers. They're also seeking volunteers to restock the refrigerators.

On a recent day, Los Angeles residents Bryant and Venessa Rodriguez arrived with armloads of bread, juice, eggs, vegetables and other items. Like others at the refrigerator, they were wearing protective masks.

“The reason why we came today is because we've seen on the news and in other outlets that there’s a lot of people that are in need," Bryant Rodriguez said.

Vergara, who works for a nonprofit that has provided food to homeless people, said those who visit the fridges run the gamut from the homeless to people who have lost their jobs or had their work hours cut during the pandemic. She said the fridges are donated.

Once a refrigerator is secured, the next step is getting permission from a business owner to put it on their property. Community Fridge volunteers look for small, locally run businesses like grocery stores and coffee shops whose owners have deep ties to their communities and respect from customers, who won't try to vandalize or steal the fridges.

Then they plug the fridges into the businesses' electrical outlets and wait for people to arrive, which doesn't take long. Many fridges are emptied within 24 hours.

Painted in bright colors and containing hand-lettered messages in English and Spanish proclaiming “Free Food 4 You,” “Food For Everybody” and “Take What You Need, Leave What You Don’t,” they’ve become a popular sight in their neighborhoods.

Among those visiting the South Los Angeles fridge on a recent day was 6-year-old Connor Smith, who smiled broadly —revealing gaps where his adult teeth will soon grow.

“It is so great to get free food from the free fridge,” he said before taking a sip of a bottled drink.