Lagging US, Europe speeds up help for virus-hit economy 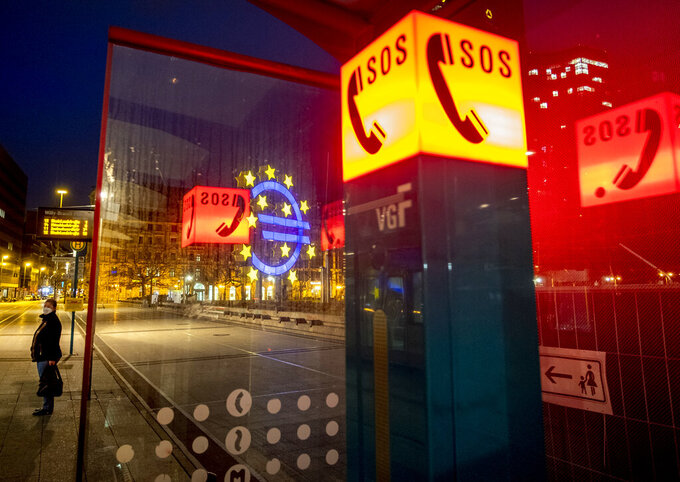 A woman wearing a face mask waits at a tram station with an emergency phone in Frankfurt, Germany, Thursday, March 11, 2021. (AP Photo/Michael Probst)

Frankfurt, Germany (AP) — The European Central Bank said it would step up its bond-purchase stimulus to support an economy whose recovery is expected to lag a year behind the rebound in the U.S., held back by slow vaccine rollouts and less relief spending by governments.

The central bank for the 19 countries that use the euro said Thursday that over the next quarter the purchases would be conducted “at a significantly higher pace than during the first months of the year."

The move is aimed at preventing a premature rise in borrowing costs while businesses are still struggling with coronavirus restrictions like curfews and shutdowns. Yields on long-term government bonds have risen by about 0.3% since the start of the year in the eurozone. That is not much, and rates remain low. But economists say it is too early for the eurozone to withstand higher rates, usually associated with recovering growth and inflation.

The rise in longer-term borrowing rates is regarded as a spillover from the U.S., where the economic recovery is expected to be faster. The eurozone is still in a double-dip recession and is seen by economists as not ready for rising rates. Output shrank 0.6% in the last three months of 2020 and probably declined again in the first quarter of this year, say economists.

China was the only major economy to grow last year, and the U.S. is expected to reach pre-pandemic levels of output by the middle of this year.

By contrast, the eurozone economy is not expected to recover until mid-2022, held back by a slow vaccine rollout and lower levels of government relief spending compared with the U.S. The U.S. Congress on Wednesday approved a wide-ranging $1.9 trillion relief package pushed by new President Joe Biden, coming on top of previous relief legislation under predecessor Donald Trump.

ECB President Christine Lagarde told a news conference that the rise in market borrowing rates, “if left unchecked, could translate into a premature tightening of financial conditions for all sectors of the economy. This is undesirable.”

Lagarde urged European leaders to promptly implement the European Union's 750 billion-euro recovery fund which is aimed at supporting government spending over the next several years. She said that the “massive” $1.9 trillion relief package passed Wednesday in the U.S., a key trade partner, would boost demand from outside the eurozone.

The bond purchases have the effect of pushing down bond yields, which are used as benchmarks for borrowing across the region. So the ECB’s move would in theory help keep credit cheap for companies who need to invest or borrow to get through the pandemic. Businesses are reeling from the economic impact of government restrictions on public life.

Lagarde didn't specify an amount for the accelerated bond purchases. The ECB bought 59.9 billion euros worth of bonds in February and 53 billion euros in January. The purchases ran as high as 120 billion in June 2020.

The purchases will come out of the total of 1.85 trillion-euro set aside for the program; almost 1 trillion euros of that has yet to be used. The ECB says it will continue the purchases until at least the end of March 2022, and in any case until it judges that the pandemic crisis phase is over.

The ECB's decision to step up its stimulus caused an immediate reaction in financial markets, with bond yields sliding and stock markets rising in Europe.

The ECB is the monetary authority for the 19 of 27 European Union member countries that have joined the common currency. It plays a role analogous to that of the U.S. Federal Reserve, the Bank of Japan or the Bank of England in the U.K. It can steer market interest rates in ways best for the economy, using short-term benchmarks such as its weekly lending to bank or intervening in the bond market to affect longer-term rates.