Lakers' LeBron James speaks out: 'Nothing is normal in 2020' 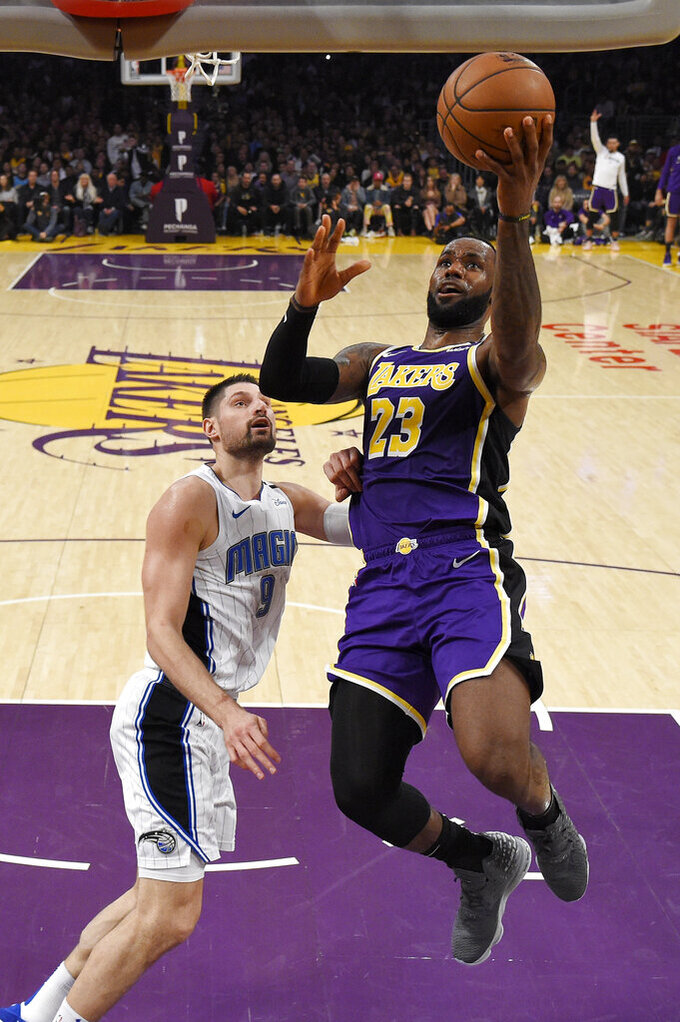 FILE - In this Jan. 15, 2020, file photo, Los Angeles Lakers forward LeBron James, right, shoots as Orlando Magic center Nikola Vucevic defends during the second half of an NBA basketball game, in Los Angeles. The Milwaukee Bucks and Los Angeles Lakers already have just about guaranteed themselves the top two playoff seeds and face a delicate balancing act when the NBA returns to action. They must try to shake off the rust after a 4 ½-month hiatus while also staying as healthy as possible for the postseason. (AP Photo/Mark J. Terrill, File)

He now has a one-size-fits-all answer.

That’s not entirely true. The NBA is a few weeks from playoff mode, and James -- just like normal — has himself and the Los Angeles Lakers squarely in the mix to compete for championship. It is a rare bit of normalcy for a player who appeared in eight consecutive NBA Finals from 2011 through and including 2018, and for a franchise that has won 16 championships.

Everything else about this year has been most abnormal. A pandemic suspended play. David Stern, the NBA’s commissioner emeritus, died. Kobe Bryant, who was the third-leading scorer in NBA history until James passed him on Jan. 25, died in a helicopter crash the following day. And now James, the Lakers and 21 other teams are at Walt Disney World, separated from the rest of the world, trying to salvage a season and decide a champion.

James took Bryant’s death — the Lakers’ star died along with his 13-year-old daughter Gianna and seven others on the morning of Jan. 26 — particularly hard.

Lakers coach Frank Vogel has seen playoff-season James three times before — never liking how those experiences went. Vogel was coaching Indiana and his three best seasons there saw the Pacers matched up with James and the Miami Heat in the Eastern Conference playoffs.

This time, Vogel is genuinely and understandably eager to see James at playoff time.

“Obviously, it’s been great having LeBron on our side after years of going against him,” Vogel said. “But in particular, when we get to the playoff environment, I’ve just seen how he is this year in some of the bigger regular season games, how he’s more mentally locked in, more vocal, more making sure everybody else is locked in. And I anticipate that come playoff time, we’ll see that all being done at an enhanced level.”

James will have a big say in whether the Lakers win that title. By the time the season resumes July 30, the ballots will be cast to determine whether he or Milwaukee’s Giannis Antetokounmpo — the two frontrunners — wins the NBA MVP award. James is almost mathematically assured of winning his first assist title; he cannot be caught by second-place Trae Young of Atlanta no matter what happens at Disney. And the Lakers, barring all-out collapse, will be the No. 1 seed in the Western Conference.

By any measure, it’s been a good year on the court for James.

A weird year, but a good year. Time will tell if it’s a great year. He believes the bubble will work and sees no reason yet why this NBA experiment would fail. And while he detests being away from his family and his inner circle, he’s using this chance to be locked in to focus on the opportunity.

“As far as the MVP race, I think I’ve shown what I’m capable of doing, not only individually but from a team’s perspective, us being No. 1 in the West,” James said. “There was a lot of conversation about, you know, ‘LeBron can do those things in the East but if he ever came to the West, what can he do?’ I heard all of that, and to have our team at the top of the Western Conference and playing the way that we were playing at that time and the way I was playing, you know, that’s definitely a good feeling.”

NOTES: The league said 346 players had been tested on the NBA campus since last leaguewide coronavirus results were announced July 13, with no positives. ... Houston coach Mike D’Antoni said guard Russell Westbrook, who revealed last week that he tested positive for coronavirus, was flying in Monday and rejoining the team. “I know he’ll be ready,” D’Antoni said. ... Sacramento announced that Marvin Bagley III was having an MRI to determine how badly he injured his right foot in practice Sunday. The Kings will be without De’Aaron Fox (ankle), Richaun Holmes (extended quarantine for rules violation) and Alex Len (coronavirus, returned to practice Monday) for their exhibition opener against Miami on Wednesday. Harrison Barnes (coronavirus) is also still away from the team and Bagley’s status seems most unclear now as well.