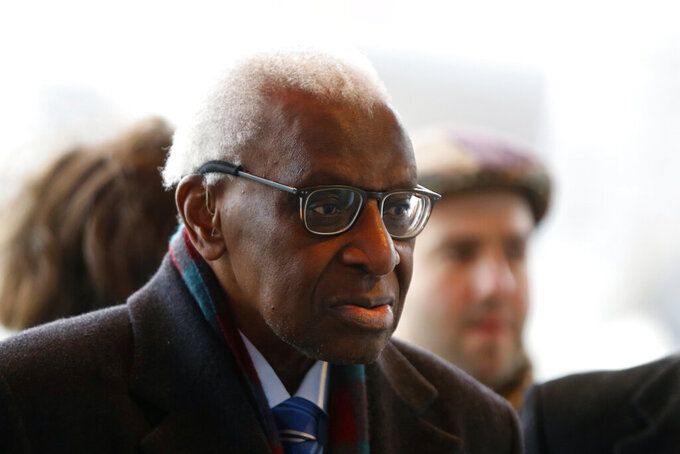 DAKAR, Senegal (AP) — Lamine Diack, the controversial long-time leader of track and field who was convicted of extorting money from athletes and accused of taking bribes in an Olympic hosting vote, has died, his family said Friday. He was 88.

Diack led track and field’s governing body — then known as the IAAF, now World Athletics — for 16 years. But his name has become a byword for corruption in Olympic circles since 2015, as allegations of wrongdoing emerged soon after Diack's leadership of his sport ended.

Diack died in his home country, Senegal, where he was allowed to return this year from France after being detained under house arrest for several years and then convicted of various corruption charges linked to abuses of his prominent positions in world sports.

“With the death of Lamine Diack, Senegal loses one of its most illustrious sons,” the west African country's President Macky Sall said via Twitter.

A former politician in Senegal, Diack became head of the IAAF in 1999 and saw the sport flourish during his time in charge, in part because of the popularity of sprinter Usain Bolt.

Behind the scenes, Diack and his son Papa Massata Diack were involved in wrongdoing that would taint the integrity of their sport and the IOC's bidding contests and votes to choose Olympic host cities.

They were linked to extorting cash from runners, to cover up their doping cases before the 2012 London Olympics, and taking bribes from Brazilian officials to help ensure Rio de Janeiro was picked as the 2016 Olympics host. Among its opponents was a Chicago bid supported at the vote in Denmark by then-President Barack Obama.

The IOC has now scrapped the traditional bid campaigns and contests that proved vulnerable to abuse, and IOC members no longer vote from a range of candidates. Instead, a controlled in-house process picks a single preferred host for IOC members to rubber-stamp.

Diack was sentenced to four years in prison, two of them suspended, in September 2020 for covering up the payment of bribes by Russian athletes involved in doping cases and the financing by Russia of political campaigns in Senegal.

In May, Diack returned home to Senegal from France, where he had been under house arrest, after a local soccer club paid a bond of about $600,000 to let him leave.

Diack was convicted on multiple charges of corruption during his tenure, some of it related to the Russian doping scandal. His son was sentenced in his absence to five years in prison.

The former IAAF president's conviction marked a spectacular fall from grace for such an influential figure in the world of Olympic sports.

At the sentencing last week in Brazil of its one-time most senior Olympic official Carlos Nuzman, the court was told bribes were paid so that the Diack family could help secure several IOC votes for Rio in 2009.

The years-long case also implicated one of Africa's top track athletes, four-time Olympic medalist Frank Fredericks of Namibia who rose as an IOC member to take a seat on its executive board. The IOC suspended Fredericks after French investigators revealed he got a $300,000 payment on the day of the Rio vote in October 2009 routed via the Diacks.

At his own trial, Lamine Diack was also found guilty of being part of a scheme that squeezed 3.2 million euros ($3.8 million) in bribes out of Russian athletes suspected of doping.

The hush money allowed the athletes, who should have been suspended, to keep competing. Diack was also found guilty on breach of trust charges but acquitted of money laundering.

His son, Papa Massata, worked as a long-time IAAF marketing consultant. The French judge said $15 million was funneled to the younger Diack’s companies from various contracts negotiated by the IAAF while his father was in charge.

Even before he became IAAF president, Lamine Diack took irregular cash payments from the Swiss sports marketing agency ISL that was later at the center of a kickbacks scandal that rocked world soccer body FIFA.

The IOC ethics commission formally warned Diack in 2011 after a British television program detailed ISL payments to Diack in 1993 amounting to $30,000 and 30,000 French francs. At the time Diack was a vice president at the IAAF, which was negotiating a deal with the marketing agency.

Diack was a full IOC member for 15 years until 2014, then got an honorary membership which ended the next year when the extortion of athletes was detailed as part of the Russian doping scandal.

During the French investigation, Diack reportedly said under questioning that he asked for about $1.6 million from Russian interests in 2011 to support opposition candidates in upcoming elections in Senegal. The 2012 presidential vote was won by Sall, who later denied getting funding from Diack for his campaign.

Sall wrote Friday on Twitter that Diack was "a man of great dimension. My heartfelt condolences to the whole Nation.”