Lasitskene among 22 Russians given neutral status for 2022 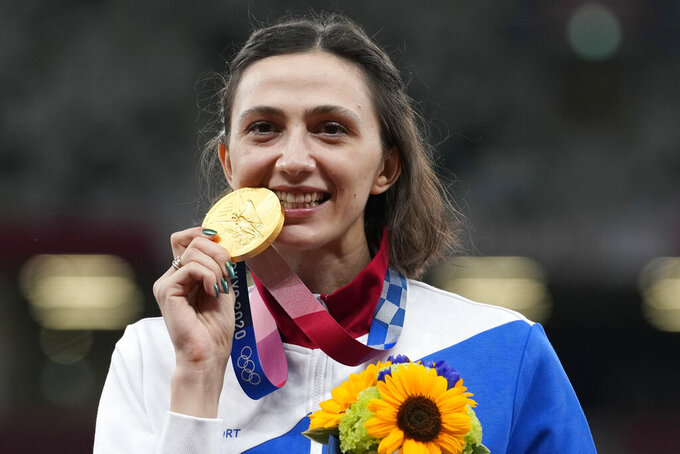 FILE - Gold medalist Mariya Lasitskene, of Russian Olympic Committee, celebrates during the medal ceremony for the women's high jump at the 2020 Summer Olympics, Aug. 7, 2021, in Tokyo. Olympic high jump champion Mariya Lasitskene is among 22 Russians given permission to compete in international track and field events as neutrals this year while Russia remains suspended. The decision by World Athletics comes in time for Lasitskene to defend her world indoor championship title next month. (AP Photo/Martin Meissner, file)

To get the coveted status, athletes have to meet a minimum number of recent drug tests and be vetted for possible past involvement in doping. They can then compete as “Authorized Neutral Athletes” at international events without the Russian flag or anthem.

World Athletics is expected to grant more applications through the year. Russia will be allowed to select up to 20 athletes for major events such as the March 18-20 world indoor championships and the world championships in Eugene, Oregon, in July.

The Russian track and field federation was suspended for widespread doping in November 2015. World Athletics has long promised to lift the ban in return for anti-doping reforms. The process was delayed when the then-Russian federation president Dmitry Shlyakhtin and other senior officials were banned from the sport for presenting fake medical documents to obstruct an anti-doping investigation into a top athlete.

Rune Andersen, the head of World Athletics' task force dealing with Russia, said in November that Russia was again making “ steady progress ” toward being reinstated.