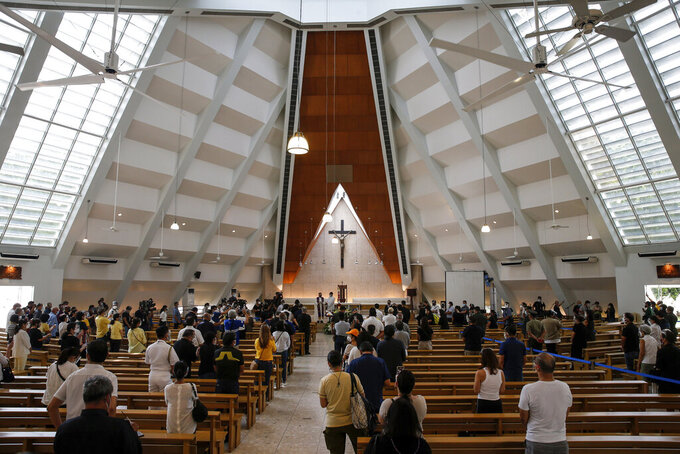 A general view of the public viewing of former Philippine President Benigno Aquino III's wake at the Church of Gesu, Ateneo de Manila University in Quezon City, Philippines, Friday, June 25, 2021. Aquino, the son of pro-democracy icons who helped topple dictator Ferdinand Marcos and had troublesome ties with China, died Thursday, a cousin and public officials said. He was 61. (Mark Cristino/Pool Photo via AP)

MANILA, Philippines (AP) — Late Philippine President Benigno Aquino III was hailed Friday for his integrity in a Southeast Asian nation long plagued by corruption and for standing up to China over long-raging territorial disputes in the South China Sea.

Hundreds of people lined up at a Catholic church in Manila despite coronavirus restrictions to pray before a silver urn with the cremated remains of Aquino, who died Thursday at age 61 of kidney disease arising from diabetes.

“I just want to show my support and big thanks to Pnoy,” Ivy Roque, a 41-year-old call center employee said, using Aquino’s nickname. “In his time, we were given hope that the Philippines can rise from poverty.”

President Rodrigo Duterte declared 10 days of national mourning and ordered Philippine flags to be flown at half-staff across the country to honor Aquino, who led the country from 2010 to 2016.

Aquino's remains are to be interred Saturday in a private cemetery beside the tombs of his parents, the pro-democracy icons who helped topple dictator Ferdinand Marcos in the 1980s.

Ordinary Filipinos took to Facebook and other social media platforms to mourn Aquino and hail him as an honest leader who reminded the country that nobody was above the law.

Condolences also poured in from around the globe.

“He was a valued friend and partner to the United States, and he will long be remembered for serving his country with integrity and selfless dedication,” U.S. President Joe Biden said in a statement.

Aquino’s “steadfast commitment to advancing peace, upholding the rule of law, and driving economic growth for all Filipinos, while taking bold steps to promote the rules-based international order, leaves a remarkable legacy at home and abroad that will endure for years to come,” Biden said.

Duterte, who has publicly ridiculed the political opposition to which Aquino was associated, called for the outpouring of sympathy for his predecessor to be turned into an “opportunity to unite in prayer and set aside our differences.”

Aquino’s late parents, including former President Corazon Aquino, are revered for helping lead the resistance against dictator Ferdinand Marcos, who was ousted in a 1986 army-backed revolt that helped spark similar peaceful uprisings in authoritarian regimes worldwide.

Philippine TV networks ran tributes to Aquino and his advocacy for good governance. DZMM radio network broadcast messages from listeners, including one who praised Aquino “as the president with the biggest guts against China.”

Aquino authorized the filing in 2013 of a complaint that questioned the validity of China’s sweeping claims in the South China Sea before an international arbitration tribunal. The Philippines largely won. But China refused to join in the arbitration and dismissed the tribunal’s 2016 ruling, which invalidated Beijing’s claims.

Aquino’s legal challenge and the eventual ruling was praised by Western and Asian governments but plunged relations between Beijing and Manila to an all-time low.

One of Aquino’s major successes was the signing of a 2014 peace deal with the largest Muslim separatist rebel group, the Moro Islamic Liberation Front, that eased decades of fighting in the country's south.

But while Aquino moved against corruption — detaining his predecessor Gloria Macapagal Arroyo and three powerful senators — and initiated anti-poverty programs, the deep-seated inequalities and weak institutions in the Philippines remained too daunting.

Opponents pounded on missteps, but Aquino retained high approval ratings when his six-year term ended in 2016. Philippine presidents are limited to a single term.

Aquino campaigned against Duterte, warning he could be a looming dictator and could set back the democratic and economic momentum achieved in his own term. Duterte, however, won with a large margin on a vow to eradicate illegal drugs and government corruption in his first three to six months in office.

Duterte failed to fulfill his bold promise, acknowledging that he underestimated the magnitude of the problems. Aside from his brash rhetoric, he has been condemned for an anti-drug crackdown that has killed thousands of mostly petty suspects and alarmed Western governments and human rights groups.

Antonio Trillanes IV, a former senator and leading Duterte critic who went to Aquino’s wake, said the former president’s death rekindled memories of his integrity and leadership style that starkly contrast with the “culture of hate, killing and deaths” under Duterte.

“We’re now fondly recalling the pleasant conditions in our country before compared to what we're seeing now,” Trillanes said.