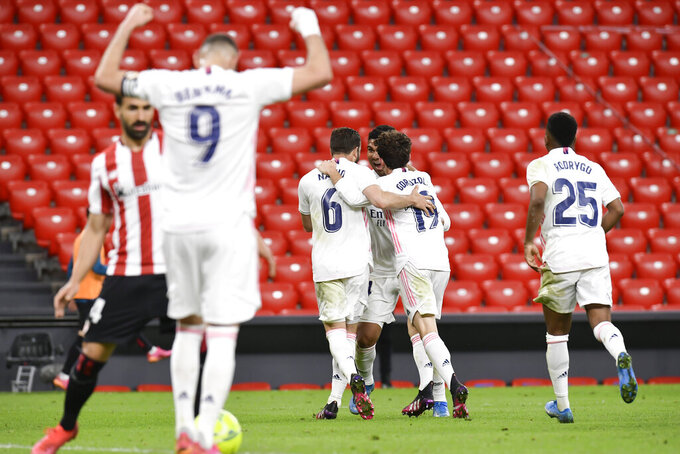 He didn’t expect it to be this hard, though.

Suárez came to the rescue for Atlético when its Spanish league title chances suddenly appeared to be slipping away on Sunday, scoring an 88th-minute winner in a 2-1 victory against Osasuna that moved the team a win away from claiming its first league title since 2014.

“We have to get used to the fact that to win this league you have to suffer,” Suárez said. “Everybody says that's part of Atlético's motto (to suffer), but I didn't think it would be that much.”

Atlético enters the final round two points in front of Real Madrid, which stayed in contention by winning 1-0 at Athletic Bilbao. Madrid has a better head-to-head tiebreaker against its city rival.

Barcelona dropped out of contention for the title after losing 2-1 to Celta Vigo at home.

Atlético's lengthy spell at the top of the league disappeared in only a few minutes late in the second-to-last round, when all matches were played at the same time.

Madrid scored against Athletic in the 68th minute, then Atlético conceded against Osasuna in the 75th. Instead of being in the position of celebrating its first league title in seven years, Atlético suddenly saw its city rival take control of the title race ahead of the final round.

Only a victory could have put Atlético back in control of its own fate, and Diego Simeone's team got it after Renan Lodi scored from inside the area in the 82nd and Suárez netted the winner with a low shot from near the penalty spot a few minutes from the end.

It was the 20th league goal for Suárez, who has been key for Atlético the entire season after being let go by Barcelona.

The several hundred Atlético fans outside the Wanda Metropolitano cheered loudly and could be heard from inside after Suárez's decisive goal. He took out his jersey as he rushed to celebrate with his teammates.

“We didn't deserve to suffer like we did in the end after one of our best performances in the first half this season,” he said.

Atlético, which squandered several chances throughout the match, can clinch the title against relegation-threatened Valladolid in the final round. Madrid will host seventh-place Villarreal hoping for a stumble by its rival.

Atlético is trying to win its 11th league title, and first since it took on Madrid and Barcelona with a squad led by Diego Costa and Arda Turan. Since 2014, Barcelona has won the league four times and Madrid twice, including last season. Atlético’s previous title had come in 1996, when Simeone still played for the club.

Trying to win back-to-back league trophies for the first time since 2007-08, Madrid took the title race to the final round thanks to its win against midtable Athletic at San Mamés Stadium.

Defender Nacho Fernández scored the winner from close range in the 68th after a pass from Casemiro.

The victory came amid widespread rumors that Madrid coach Zinedine Zidane is leaving the club at the end of the season, but he denied reports that he had already told the squad of his intention to quit.

“We can't talk about my future right now, we have to focus on this last match,” he said.

Barcelona’s home loss comes in another disappointing season for the club in which it only lifted the Copa del Rey.

Messi scored his league-leading 30th goal with a 28th-minute header at the Camp Nou, but Santi Mina equalized in the 38th and netted the winner in the 89th. Barcelona played a man down from the 83rd after defender Clément Lenglet was sent off.

The Catalan club has been marred by political turmoil and financial difficulties prompted by the coronavirus pandemic.

This could be its last season with Messi, who still hasn’t announced if he will continue at the club after having his request to leave denied at the end of last season.

Fans were back for the first time in two stadiums in Spanish regions where the coronavirus pandemic is considered to be more under control.

It didn’t take long for Valencia supporters to celebrate at Mestalla Stadium as Gonçalo Guedes scored for the host team three minutes into the 4-1 win against last-place Eibar.

There were also fans at Villarreal’s home game against Sevilla, which it won 4-0.

No more than 5,000 home fans were allowed in either stadium, and social distancing had to be maintained at all times.

Real Sociedad stayed in position to secure a Europa League spot with a comfortable 4-1 win over Valladolid. That left the club in fifth place, one point in front of both sixth-place Real Betis and seventh-place Villarreal.

Carlos Bacca scored a hat trick and Gerard Moreno added another for Villareal, which played with a man advantage from the 52nd as Sevilla defender Diego Carlos was sent off.

Real Betis stayed in contention by beating Huesca 1-0 at home.

Last-place Eibar was relegated after the loss to Valencia, while Huesca, Valladolid and Elche will fight to avoid demotion in the final round.

Eibar had played in the first division for seven straight seasons.

Getafe made sure of avoiding relegation thanks to an 84th-minute winner by Japan forward Takefusa Kubo in the 2-1 win against Levante at home.