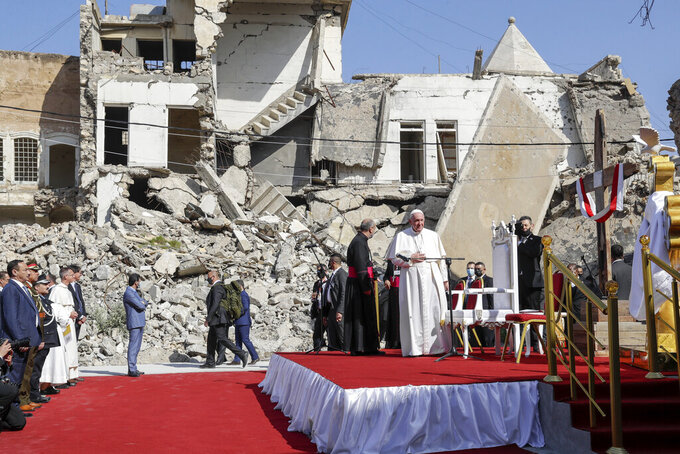 Pope Francis, surrounded by shells of destroyed churches, arrives to pray for the victims of war at Hosh al-Bieaa Church Square, in Mosul, Iraq, once the de-facto capital of IS, Sunday, March 7, 2021. The long 2014-2017 war to drive IS out left ransacked homes and charred or pulverized buildings around the north of Iraq, all sites Francis visited on Sunday. (AP Photo/Andrew Medichini)

Thousands of people have filled the sports stadium in the northern city of Irbil for Pope Francis’ final event in his visit to Iraq: an open-air Mass featuring a statue of the Virgin Mary that was restored after Islamic militants chopped of the head and hands.

Organizers of the service say Francis will bless the statue, which was transported from the church in Keramlis, a Christian village on the Nineveh Plains, to a place of honor on the altar for Sunday’s Mass.

Keramlis, an ancient Assyrian town less than 18 miles (30 kilometers) southeast of Mosul, fell to Islamic State in August 2014, two months after the extremists took Mosul and surrounding areas, sending most inhabitants fleeing. In Keramlis, they destroyed the interior of St. Adday church and decapitated the statue of the Madonna.

Francis travelled to northern Iraq to encourage those Christians who have remained to persevere, rebuild, and ultimately forgive the militants who committed such atrocities.

Pope Francis is urging Iraq’s long-suffering Christians to forgive the injustices committed against them by Muslim extremists and to continue persevering to rebuild the country after years of war and sectarian conflicts.

Francis issued the appeal during a joyful visit to the Christian community of Qaraqosh, on the Nineveh Plains of northern Iraq. The city was overrun by the Islamic State group in the summer of 2014, and only a fraction of the families have returned.

Speaking to a packed Church of the Immaculate Conception, Francis said “forgiveness” is a key word for Christians. “The road to a full recovery may still be long, but I ask you, please, not to grow discouraged. What is needed is the ability to forgive, but also the courage not to give up.”

He spoke after a Qaraqosh resident, Doha Sabah Abdallah, told him how her son and two other young people had been killed in a mortar strike Aug. 6, 2014 as IS was nearing the city. Their death was the alarm for the rest of the residents to flee.

“The martyrdom of these three angels was a clear warning: if it weren’t for them, the people of Baghdede would have remained, and would have inevitably fallen into the hands of ISIS,” referring to the name of Qaraqosh used by residents. “The deaths of three saved the entire city.” She said now it was for the survivors to “try to forgive the aggressor.”

Pope Francis has arrived at a church in the Christian Iraqi town of Qaraqosh, once occupied by the Islamic State group.

A jubilant, ululating maskless crowd lined the main thoroughfare to welcome him as his motorcade slowly passed, heading to the church. Francis rolled down the window and waved to the crowd from his armored car, which was surrounded by Iraqi and Vatican security forces.

Francis is visiting the community on the Nineveh Plains where only a fraction of families have returned after fleeing the IS onslaught in 2014. He will hear testimonies from residents and pray in the Church of the Immaculate Conception, which was believed to have been torched by IS and has been restored in recent years.

Organizers said some 600 people were expected inside the church, one of the largest indoor crowds Francis has seen in Iraq amid a spike of COVID-19 infections. Vatican and Iraqi church organizers had said social distancing and other anti-coronavirus measures would be enforced, but on Sunday caution and masks appeared to have given way to sheer enthusiasm that a pope was finally in Iraq.

Pope Francis has prayed for those killed in Iraq’s wars against the haunting backdrop of the ruins of four demolished churches in the northern city of Mosul, which suffered widespread destruction in the war against the Islamic State group.

As women ululated and a white dove was released in a sign of peace, Francis inaugurated a memorial to the dead on the final day of his visit to Iraq.

IS captured Mosul in the summer of 2014 and ruled the city according to its brutal interpretation of Islamic law until 2017, when Iraqi and international forces liberated the city after months of heavy fighting that killed thousands of civilians.

Christian and Muslim leaders in Mosul have welcomed Pope Francis' visit to the Iraqi city devastated by war and are calling on Christians who fled the Islamic State group's onslaught to return.

In a moving scene that would have been unimaginable just a few years ago, the pope mounted a stage in a city square surrounded by bombed-out churches and other buildings to deliver a message of peace and unity.

The Rev. Raed Kallo, the only priest in Iraq's second largest city, shared his story among the crowd and before the pontiff. He fled along with most of his congregation of 500 Christian families when IS overran the city in June 2014.

But he said he returned three years ago, after the extremists were defeated by Iraqi and international forces in a grueling campaign that left much of the city in ruins. He said: “My Muslim brothers received me after the liberation of the city with great hospitality and love."

But he said only around 70 Christian families reside in Mosul today. The rest are afraid to return and many have emigrated abroad.

Also addressing the crowd was Gutayba Aagha, a Muslim and the head of the Independent Social and Cultural Council for the Families of Mosul. In words welcomed by Francis, he said: “In the name of the council I invite all our Christian brothers to return to this, their city, their properties, and their businesses.”

The stage in Mosul where Pope Francis will speak is surrounded by the bombed-out ruins of churches and other buildings destroyed in the climactic battle of the war against the Islamic State group.

The pope is expected to pray for Iraq's war victims in the country's second-largest city, which was ruled by the extremists for nearly three years. Iraqi and international forces liberated Mosul in 2017 following months of street-by-street battles.

With the rubble as backdrop, Francis is expected to make a powerful appeal to Iraq's Christians to remain and rebuild despite decades of war and instability. He is also expected to reprise his message of interreligious tolerance and fraternity in the Muslim-majority country that is home to several religious minorities.

The square is home to four churches representing different denominations, all left in ruins. A ceremonial throne painted gold with a sculpture of a dove awaited the pontiff at center-stage. Thousands of Iraqi security forces deployed in Mosul, which was largely shut down for the visit.

It was from Mosul’s al-Nuri mosque that IS leader Abu Bakr al-Baghdadi made his only public appearance when the group overran the area in the summer of 2014. His Friday sermon called on Muslims to follow him as "caliph." He was killed in a U.S. raid in Syria in 2019.

IS no longer controls any territory in Iraq or Syria but still carries out sporadic attacks.